Pop star turned gardening guru, Kim Wilde has a passion for performing and a gift for intuition. Julie Burniston finds out more.

Kim Wilde wanders in from the garden of her 400-year-old converted barn in Hertfordshire with trowel in hand and a streak of mud across her cheek. She whips off her gardening gloves to shake hands with me and, as she breaks into a smile, it strikes me how much younger she looks than her 43 years. She fresh-faced, friendly and impossible not to like. We settle ourselves down in the living room, which is filled with piles of children's books, crayons and toys. Kim's children, Harry, six, and Rose, four, have certainly been busy. Their framed drawings hang all over the walls. Kim lives here with her husband, the actor, singer and producer, Hal Fowler, whom she married within six months of meeting him when they both appeared in the stage production of Tommy eight years ago.

Kim found fame in 1981 when she was 20, with the single 'Kids in America', which reached number two in the UK. She went on to release more than 30 singles and has sold seven million albums worldwide. Since then, she has reinvented herself as a gardening expert, appearing regularly on our television screens in 'Garden Invaders' and 'Better Gardens' and writing gardening advice columns.

But there's more to Kim than her passion for plants. More recently, she was brave enough to undergo colonic irrigation when she appeared in Channel Five's Celebrity Detox Camp, an experience which also helped her get back in touch with her spiritual side...

It's impressive how you've turned your career around from successful pop star to gardening expert. How did it happen?
It was a practical decision made once I knew I'd be having children. I wanted to be a hands-on mum, taking them to and from school and so on. The gardening came about because I wanted to landscape my own garden and grow fruit and vegetables for the family. So I took a horticulture course at Capel Manor College, Enfield. Researchers from ITV's Better Gardens show found out and got excited about the novelty of having me on as a guest designer. I didn't know as much about horticulture as they probably thought I did, but I grabbed the chance with both hands.

How do you feel about your reinvention?
I'm more fulfilled than I've ever been. I'm lucky I've had many different choices and experiences. But why limit yourself to one career? People don't try things because of fear. I still get scared when people talk about me as a gardening journalist. I can feel terribly insecure and put myself down. But it helps that I've got a genuine passion for what I do. And when you take a risk and do something you thought you couldn't, it's a buzz.

You must be familiar with rushes of adrenalin like that - after all, you've sung on stage in front of thousands of people...
Yes, I've always liked performing. It was the pressure to keep the momentum going with a new single or album, or to look a certain way, which became exhausting. I had very low self-esteem and suffered with depression towards the end of my singing career. It really annoyed me when the record company told me to lose weight. For years I tried to stay a size 10, but I'm happy with my body now. People have to take me as I am. I keep fit working in the garden. And I'm pleased that the likes of Jennifer Lopez have made it fashionable to have a curvy, womanly figure.

So, apart from keeping fit in the garden, what else do you do there?
Over the last few years, I've grown tasty parsnips, peas, corn, raspberries, herbs and garlic. I thought it would be complicated so I read loads of books. Then, in the end, I just bought packets of seeds and followed the instructions on the back. The kids love the garden, too. They have their own plot where they dig around, plant seeds and grow sunflowers. I really enjoy it when we all get together in the snug, our lovely outdoor eating area, which is covered with hanging vines dripping with black grapes. We have our friends round, get a little stove going, put some music on and eat and drink for hours.

Did you feel as though marriage and motherhood came quite late in life for you?
Later than I expected. I was a bit lonely, although I had had some nice boyfriends and kept busy. Meeting Hal, when he was 28 and I was 35, was like having the lights switched on. I knew I'd found the right man and it freed me up emotionally to take on the world. He's the most fantastic person I've ever met; he's an exciting, talented, honest, friendly and sexy man. Being with him gave me the confidence to step out of the music business and see who else I could be.

You've said you had an almost psychic knowledge you'd meet your soulmate one day. How did you know?
I had a deep feeling of faith that I'd find the right person to spend my life with, although I'd still have girlie chats with my friends wondering where he was. It was the same way I knew I'd be a pop star. I was definitely in touch with my psychic side then. These days I'm too busy to be psychic!

Your intuition helped you when you found your home though, didn't it?
Yes. When I was 30 and looking for somewhere to live, I'd pick up the vibes of a house very quickly, sometimes before I'd even walked through the front door. In the end, I knew I couldn't live somewhere where humans had already been, so I found this 400-year-old barn with original beams, which was perfect for renovating. People always ask if it's haunted. I tease them, saying, 'I was lying in bed the other day when I saw this white face peering down at me and it went, "Baaaa..." because it was the ghost of a sheep!'

So you're fairly open to the psychic and spiritual side of life then?
If something is inspiring I'll embrace it wholeheartedly. I feel excited if I'm in a situation where I'm scared, although I'm not a thrill-seeker. However, I once did a bungee jump. I play life fairly safely, but I love pushing myself and trying new things.

The Celebrity Detox Camp seemed like a big challenge...
I got a lot out of the experience. The detox was extreme. We didn't eat for seven days, just had detox drinks and colonic irrigation. But oddly, I really got back in touch with myself. I'd had my babies close to each other and they'd really taken it out of me. I'd gained weight, felt run-down and exhausted. I needed something drastic, so I embraced all the different treatments, the yoga and various spiritual experiences. I lost a stone, dropped a dress size to 12, and now feel so healthy and full of energy.

What was your strangest experience in the camp?
The rebirthing was emotionally draining, but I felt brilliant afterwards. Initially, I thought the therapist had eyes that seemed to undress you and I didn't want him holding me close with hardly any clothes on. When he was pulling me through the water I was wondering what I was doing in the arms of a stranger with water going up my nose. My mind was all over the place; not at all serene. But when he let me go at the side of the pool, I felt deserted. It was awful. I was holding on, begging him not to let me go. I felt this deep sadness come out of me. It was the pain of everything bad that had ever happened to me being released from my body. It freaked me out, but it was so liberating. The feeling of refreshment and renewal stayed with me for a long time.

So was it liberating to climb back into your leather trousers and sing again on the Here and Now tour alongside other 1980s stars?
It was brilliant. And it's a complete contrast to my other life, which is mainly digging. It's great to get my hair and make-up done too, as I don't get to glam up much these days. But the woman with mud on her face on television is the same person as the one in leather on stage. Although, when I asked Harry what he thought of mummy as a pop star, he said, 'That was my other mummy'.

Maybe he meant another mummy from another life!
Possibly. Kids are very perceptive and in tune with past lives. An eight-year-old child can sometimes seem wiser than an 80-year-old man, and you wonder where the wisdom comes from. I've always had a feeling that I've had quite painful previous lives, which is why everything is so comfortable and lovely now.

Born Chiswick, London, 18 November 1960.
Star sign Scorpio.
Real name Kim Smith. She took the stage name of her father Reginald Smith who performed as Marty Wilde in the 1950s.
Siblings Brothers Ricki and Marty Junior and sister Roxanne.
Fascinating fact Kim shares a Guinness world record with landscape gardener David Fountain for transplanting the largest tree in the world.
Recurring dream Kim used to have a recurring dream that all her teeth were falling out. Apparently, her mouth was full of decaying pearlies so she had to spit them all out.
Least favourite flower Carnations, after she once had a 'monumentally boring' Saturday job cutting the buds off growing carnations, so the top ones got all the nourishment.
Favourite foods Baked beans, sushi, beef carpaccio and gazpacho soup. 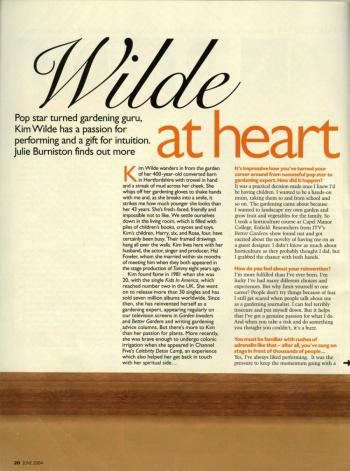 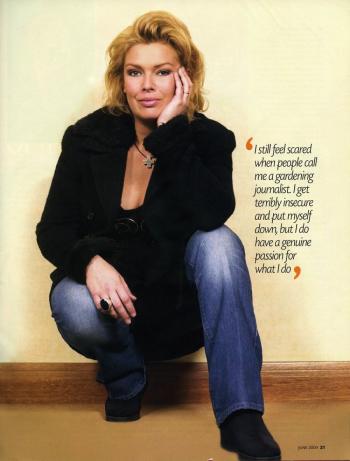 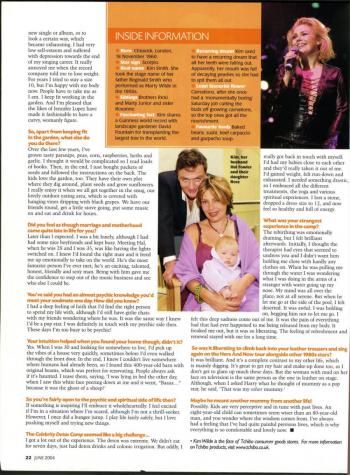