MORE than two decades after shooting to fame with Kids In America, Kim Wilde is still remembered by many as the pouting, peroxide blonds teenage popstar. But now Wilde is a mother of two, wellies have taken the place of glamour and she has traded her 80s chart fame for her new gardening career. And the 43-year-old is far happier with her life as wife and mother, she reveals.

"After 10 years performing, I had an emotional crash landing because I hadn't made time for me," she says. "I drove myself into the ground. I was constantly wound up with the stress of performing. After that, I became more focused on my quality of life, and never more so than when I married and had children."

Despite selling millions of records at the height of her fame, there's no way she'd want to be a full-time pop star again, she says, as it would mean being apart from daughter Rose, three, and five-year-old son Harry. "I would get really bored, and it would take me away from the children. And I wouldn't want to let my gardening projects go. I met my husband Hal in 1996, I thought my priority was to have children, and to be there for them, and the interviews and travelling were completely incompatible with that."

But she discovered one drawback to being a mum when she spent a week in Thailand last summer, as part of reality show Celebrity Detos Camp, with Tamara Beckwith and Keith Duff. The programme converted her to the benefits of detox. "What it taught me was that I have to look very closely at what I am eating," she says. "I had got into bad habits like finishing off the kids' fish fingers and Marmite on toast." After returning, she started working with naturopath Michael van Straten on a 10-day, home detox plan.

"I felt fantastic, I lost loads of weight and had much more energy, and my skin looked much better," she says. After shedding a stone in weight, she has now swapped the gym for power walking three times a week, and the healthy eating principles of the detox plan. The new video includes Kim's own diary, to motivate others, as she progresses through the daily meal plans, drinks and supplements as well as the rewarding massage, facial and relaxing treatments which are built in to the plan.

And as she has not completely turned her back on performing, her new energy is certainly coming in useful. In between her work on Better Gardens, Garden Invaders, The Chelsea Flower Show, The Great Garden Guide, and other gardening magazine and TV work, Wilde has been a fixture of the Here And Now tour, which has taken place in the UK over the past three years. Performing alongside other 80s stars, including Curiosity Killed The Cat, Paul Young and T'Pau, is a lot of fun, she says. "It's only now that I've got to know them all, years on from when we were in the charts. Now I'm friends with Heaven 17 and Martin Fry from ABC. When we were younger, we were all competing, but now we're all handing round pictures of our children. We all act like a bunch of kids because now we're all parents, it's our chance to let our hair down a bit. I guess you could say that we don't get out much", she laughs.

Her chart-topping days aren't over yet either - she was approached by German TV executives who wanted to record a version of Born To Be Wild, from cult film Easy Rider, a hit which led to a record deal with a German company. She has since released another single with 80s single Nena, called Anyplace, Anywhere, Anytime, which has been No 1 in five European countries. "We are like a next-generation tATu", she smiles.

Brought up around music - her father is 50s singer Marty Wilde - she says her earliest memories are of how he made people come alive. "He had a fantastic record collection and we had music in the house all the time, whether it was Simon and Garfunkel, Tchaikovsky or Elvis Presey. Then I saw Agnetha in Abba and I thought I had never seen anyone more beautiful in my whole life. I knew that's what I wanted to do."

But it was when she thought her pop career was coming to an end in the mid 90s, that she found her new purpose in life. "I had made an album which wasn't really doing anything and I thought my time in pop was up." Then came an opportunity to audition for the female lead in West End musical Tommy. "My destiny was written all over it", she says. "It was the first and only audition I will ever do. It was terrifying."

But she got the part, and on the first day of rehearsals, met her husband Hal Fowler, an actor and singer. The couple started dating in March 1996, and were married that September. "I very quickly fell in love. It was a relief", she says. "I was 35, and beginning to wonder if I would ever meet anywone I felt that sure about. But I felt really emancipated and it gave me the strength to walk away from the music industry."

It was while she was pregnant with Harry that she took the first steps in her new career, by attending a planting design course at horticultural college. Producers of the makeover show Better Gardens were doing research at the college and invited her to become a designer on the show. "I was big garden makeover fan, and every time I watched it on TV I thought, I would love to do that", she reveals. "I didn't know what I was doing, but they gave me enough support. I went back to college afterwards."

She says she still doesn't like being called an expert - instead she thinks of herself as a horticultural enthusiast, although she admits gardening has been her passion since she was young. But although horticulture takes first place these days, Wilde isn't a naturally green-fingered gardener, she adds with a smile. "I've only got four houseplants and all of them could do with some help." 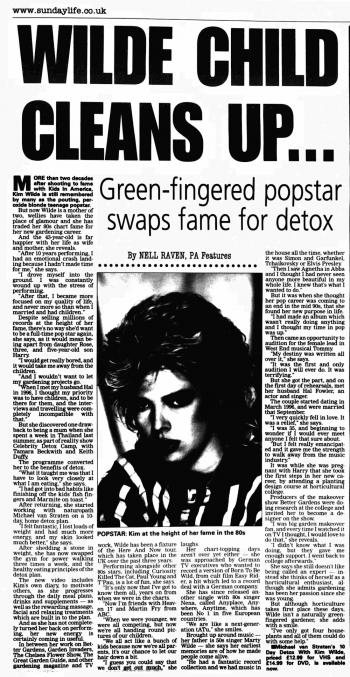