Wilde in the country

Kim Wilde may have swapped pop music for plants, but she's still a rock chick at heart. She showed Anna Magee around the Hertfordshire home she shares with her husband, Hal, and children Harry and Rose.

I've always loved plants. We moved from a semi in Greenwich to an idyllic thatched cottage in Hertfordshire when I was eight. I remember the effect the countryside had on me - the smell of the forest, the funghi, the bracken, the rain, the dead leaves, the animals - an assault on the senses. I still live in Hertfordshire now and it feels more like home than anywhere else I've lived.
We were a musical family. My mum was a backing vocalist, my dad and brother Rich would play the same guitar riff over and over and I'd constantly be yelling at him to shut up. That riff turned into 'Kids in America', the song that changed my life.
Getting famous was like a fairy tale. I went to a gig with my brother and all these established musicians were there, like Suggs and The Clash. I had just dyed my hair blonde and made it spiky, and a couple of people asked who I was. A few months later I went to Mickey Most's [record producer] studio with my brother and Most said to me, 'I think we could make you a star'. It was that corny.
Money didn't mean anything to me then. I was a solo girl living in London, having a laugh, singing a few songs. I had no responsability. For a while it was great.
Going on tour opened my eyes. I was only 19 and colliding with all sorts of different people in the music industry; some good, others not. I guess I grew up then.
I thought I'd be married by 30. Instead, I was going from one bad relationship to another. I was holding out to meet The One and buy my dream house with him but in the end I thought, 'Sod it, I'll get on with the second bit on my own and see what happens'. So I bought this place, a converted barn, and moved in alone.
It used to look like Adam Ant's house. It had faux Baroque ceilings and gilded fittings. Thank God we refurbished! I wanted it to have a real English country feel: informal, friendly, shabby chic. I think we'll be here forever.
At 36 I thought, 'I'm wasting my time'. I put loads of effort into an album and it didn't sell. Then Pete Townsend sent me a script for the musical Tommy, which he was producing. The audition was the hardest thing I'd ever done, but I got the part. The show was in the West End for a year and in it I met my husband, Hal [Fowler, actor and producer]. He was my love interest on and off stage.
I felt trapped by my music career. But Hal saw me as just Kim - not Kim Wilde, Pop Star - and with him I felt I could do anything, for the first time in my life. He absolutely loved me. He was also incredibly sexy! We married six months after we met.
I only started garden designing so I could sort out the land here. When I was pregnant with Harry, I went to a local college to learn a bit about it. Our teacher talked about plants like they were friends, raising the status of a weed to that of a rare flower.
Plants are classy. They're vulnerable, like a beautiful woman who doesn't know it.
Garden designing was a revelation. I was like a born-again Christian - I had to know everything and plant it all! It's like theatre: you create a scene, but instead of leaving the stage, plants stay and grow.
I adore the forest we've created here. Hal, the kids (Harry, six, and Rose, four) and I spend hours there. We're creating an area for wildlife, with structures, sculptures and places for the children to hide and play. We're going to open it to local kids, too.

My bikini days are over. I have always been a dieter and have copped quite a bit of flak from the press about my weight, but hey - bikinis are over-rated! I've tried them all: the Atkins diet, food combining, fat-free, grapefruit and egg (hungry and stinky), the cabbage soup diet...
I did a detox in Thailand. It was for a reality TV show and involved twice-daily colonic irrigation! I cringed at first but felt amazing after. These days I work out with a trainer and haven't felt so good about my body in years. Now I feel strong. As for dieting, Hal is too good a cook for that.
I get detached from myself, especially before my period. My PMS got worse after I had my babies. I talked to no one, but since I started taking Evening Primrose Oil, magnesium and Vitamin B6, it's virtually gone. I do think supplements help - I love stocking up in Holland & Barrett.
Sometimes I garden in just my knickers - and platforms. My favourite shoes are knackered old cream things with chunky heels. As soon as I get out of bed I put them on. That's the only weird thing I do.

I love Peter Andre. I just want to take him home and put him out in the garden. I loved watching I'm a celebrity... but I wouldn't go on a reality show now. I turned down Hell's Kitchen - being shouted at isn't my favourite thing. I would have spent two weeks being bullied and then crumpled in a heap. The idea of doing that publicly doesn't appeal.
I'm a rock 'n' roll gardener. I had some tight brown leather pants made for the 1980s tours I do with artists like Nik Kershaw and The Human League. For the next one in December (the 'Here and Now' tour) I'll be transforming myself from the quintessential English rose I've become into a leather-clad femme fatale.
My life is completely absurd. One minute I'm in front of thousands of people going mad in a top slashed to my navel, and the next I'm sitting in Wyevale Garden Centre signing autographs for people who want to know what's wrong with their Ficus benjamina and there's a life-size Noddy scaring all the children. I sit there and think, my life is bizzarre; a black comedy. And everything I ever wanted. 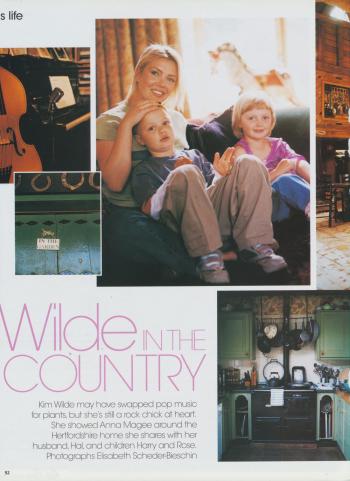 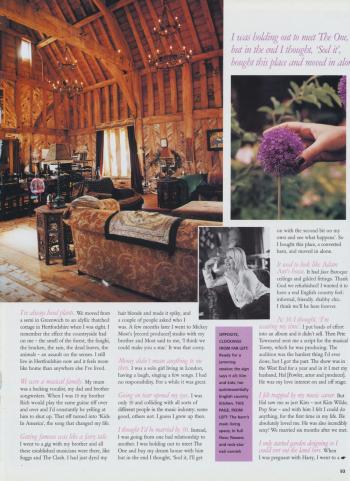 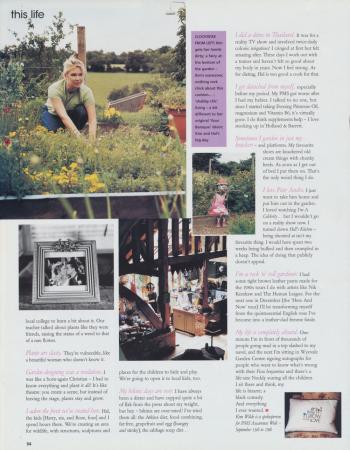