Who would have predicted back in the 80s that pop icon Kim Wilde would end up fronting gardening shows? But then many of Wilde's fans from back in the day probably spend more time in garden centres than nightclubs nowadays.
During the past few years the green-fingered singer has hosted horticultural shows for the BBC and ITV and written regular gardening columns for The Guardian and Prima magazine. But Wilde insists she's still just as passionate about music as she was when her smash-hit single Kids in America shot her to stardom back in 1980.
A massive hit worldwide, it paved the way for a recording career which yielded 10 hit albums and more than 30 hit singles and brought her success in every major record market. The highlights included performing to more than two million people on a five-month European stadium tour with Michael Jackson and scoring an American number one with You Keep Me Hangin' On.
Wilde was voted Best British Female Singer at the prestigious BPI Awards - now known as the Brit Awards - in 1983 and received nominations on two further occasions. "I still love music as much as ever," she says. "These days I'm listening to a lot of R&B and groovy, classy dance music, and Mary J Blige gets played a lot around my house these days. Perhaps pop-wise there aren't as many personalities about nowadays as there were in the 80s though.
"That's Robbie Williams' great strength because people want performers, personality and drama, and you got that in the 80s. Personally, I get more of a buzz than ever before out of singing on stage. Touring wasn't something I did enough of back then, which was a mistake in retrospect. My success then has enabled me to have a life now, to live normally and spend time with my kids. I can go down to Tesco to do the shopping and not get bothered. I was able to leave the business with a bit of dignity and if I want to do this retro 80s thing now I can."
Wilde has certainly made up for lost time since being invited to join the Here and Now Greatest Hits tour a couple of years ago. The gigs were her first live outings for some 15 years. Featuring fellow 80s luminaries such as Midge Ure, Belinda Carlisle, Limahl, Living in a Box and Bucks Fizz, the Here and Now package has been doing brisk box-office business up and down the country. And Wilde can't wait to get back on the tour bus for the next batch of gigs in December.
"I was wary about doing it at first," she says. "All those thoughts about novelty acts went through my mind and I knew it would be a bit of a gamble, but I like getting up there and performing the old songs. My instincts told me to do it. They've never let me down and I really love the whole experience now. This will be the third time I've done it and I've been amazed by the audience's reaction. Everyone gets on really well, but I have to say that it's not really very rock 'n' roll on the tour bus. We have a great laugh taking the mickey out of each other for playing at pop stars at our age. We're all fortysomethings now and it's more a case of showing each other pictures of our kids than having wild parties! Horticulture is far more challenging, and there's always something to learn. My whole fascination with it started when I decided to grow a garden for my kids, Harry, who's now six, and Rose, who's four, and I can't ever see it ending. But a bit of me will always be a singer and I'm just lucky that I can do a bit of both."
Kim Wilde will be appearing on the Here and Now Tour 2004 at Newcastle's Metro Radio Arena on December 14. For tickets, which cost £33.50, call 0870-707 8000. 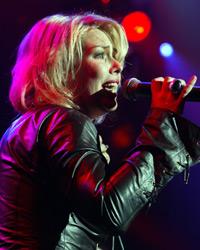