If anyone else was explaining how to train a pyracantha up a brick wall, this experience might not be quite so surreal. But the gardening expert in question is Kim Wilde. I'm well aware that it's more than a decade since Wilde swapped hits for horticulture, but if you've ever danced along to Kids in America, yelling "whoa-oh" in all the right places, you'll understand why the name Kim Wilde evokes thoughts of glossy lipstick, shoulder pads and pop, rather than inspiring queries about planting techniques.

I might not have gotten over the 1980s, but Wilde certainly has. Looking around her barn conversion in rural Hertfordshire, there are no tell-tale signs of music industry excess. Where you might expect to see gold discs on the walls, there are colourful paintings by her children, Harry and Rose. With the oak beams, decorative rugs, oversize dining table, mismatched sofas and stained glass, it feels like the home of someone creative, but you'd be hard-pushed to pinpoint "who lives in a house like this?" However, next to the huge stone open fireplace, there are a few clues. A wheelbarrow filled with chopped wood somehow manages to look like the most natural thing in the world to keep in your living room, while a pair of gardening clogs are positioned close by.

Standing in the kitchen, Wilde fills a cast-iron kettle with water to make us a cup of tea. Dressed casually in jeans and a stretchy black cotton top, it's amazing how little she's changed. The tousled blonde hair and lip gloss are still in place, and, at 44, she has the air of a woman comfortable in her own skin. So does Wilde feel lucky to have found a second career that she loves? "It's bizarre because I really wasn't expecting to find something else which would have such a big impact on my life," she says.

"Music is quite all-consuming and I wasn't really ready for something else to come in and take over. But in fact, it filled a void. I'd become bored and frustrated with music and needed a new challenge."

As pop careers go, Wilde had a good run at it. Scoring her first top ten hit in 1981 aged 20 with Kids in America, she went on to record ten albums and had 30 hit singles. How many you remember will depend on how big a fan you were - View From a Bridge, Chequered Love and Cambodia are a few, while her one and only US number one was a remake of the Supremes' You Keep Me Hangin' On. She might not quite have been the British Madonna, but Wilde was one of our favourite Eighties icons. After a decade in the music industry, however, Wilde decided she'd had enough. In 1990 she bought the barn to be near to her family and started looking for a new career direction.

Initially, Wilde didn't stray too far from the limelight, performing occasionally and popping up on TV as a guest presenter on the Big Breakfast. Her subsequent relationship with host Chris Evans also maintained her high profile. But it wasn't until 1996, when Wilde took to the stage in a West End revival of The Who's rock opera Tommy, that her life really changed direction. It was here that Wilde met her husband-to-be, fellow actor Hal Fowler. "After we got married, I was desperate to get started with having a family, and so was Hal," she says. "We suddenly thought that we'd better make a garden because the kids were going to come along and then we'd never have any time to get anything done." Here Wilde breaks off the story with some sage advice to anyone buying a new house: "The best bit of advice you could give to anyone about gardening is to do the garden first, before you concentrate on the house. These damn things take so long to bloody grow, you may as well have a head start."

The desire to create a garden that her future children would enjoy led to Wilde testing her horticultural knowledge. "We Sellotaped all these bits of paper together and we drew out what we wanted, but we didn't know anything about design and scale," she says. When she became pregnant, Wilde decided to take time out to develop her gardening skills. "I took a year off to have Harry and that was a real treat. I'd worked pretty much solidly from when I was 20 and I'd never really stopped moving and travelling and just being Kim Wilde. For me, it was so liberating to sit there and get really fat with a baby and not worry about what I looked like any more."

So, halfway through the pregnancy, Wilde enrolled in a short course at Capel Manor, her local horticultural college. She enjoyed the experience so much that she realised gardening was going to become more than just a hobby.

"I suppose those two weeks changed my life in many ways," she says. "It was the real turning point for me. I realised that I'd stumbled upon a subject that I wasn't ever going to be able to walk away from." Over the next few years, Wilde threw herself into both raising a family and gardening. She studied for a City and Guilds qualification over two years at Capel Manor and was soon in demand as a presenter for such TV programmes as Garden Invaders and Better Gardens. Off-camera, Wilde was enjoying the experience of improving her own garden and designing plots for other people. So is there any comparison between being a pop pin-up and getting compost stuck under your fingernails?

"There are lots of similarities," she says. "It's very creative and it's a very social thing." She pauses, laughs. "Of course, there are massive differences too." Wilde says that those differences are what she loves - the fact that the focus shifts from the person to the plant. "It was very liberating to be talking about a beautiful plant rather than trying to look beautiful myself. I didn't have to wear make up, I was about a stone overweight and it was all rather nice. I just thought 'so what?' I'm approaching middle age, I've had a few kids and I want to talk about gardening."

Talking about gardening has turned into writing about gardening, and Wilde's first book, Gardening with Children, is published this month. The wording on the back cover - "If you think that kids watch too much TV and they think gardening is 'boring', then help is at hand" - seems to tie in nicely with the current mood for shaking up childhood. Jamie Oliver's been doing it with school dinners and now Kim Wilde is doing her bit to ensure children get a good dose of fresh air. Inside, there's a telling comment from her five year-old daughter Rose: "When I grow up I want to be a planter like mummy." While most little girls might dream of being a pop star like mummy, Rose's comment gives us a fair indication of how infectious Wilde's enthusiasm for gardening is.

Surprisingly, she doesn't come from a long line of gardeners. Growing up in a semi-detached house in south-east London, Wilde's parents had the traditional, but uninspiring, lawn, with a border of roses and an apple tree. "I do remember nicking raspberries off next door's canes, which would poke through our fence," she says, "and I do remember collecting rose petals and making perfume in Coke bottles. But our garden there was pretty grotty. When I was eight, Mum and Dad had moved here - to Hertfordshire - and all of a sudden we were surrounded by stunning plants." Having previously associated flowers with something you buy in a shop, Wilde found herself face to face with nature. Although her parents weren't particularly interested in gardening, they had friends who were and Wilde distinctly remembers a neighbour who had a giant hogweed growing by his front door: "We were told absolutely never to touch this plant, we were only allowed to look at it. It was one of the most amazing looking plants I've ever seen and I'll never forget that."

It was this sort of memory that made Wilde want to create a garden which would inspire her own children, and she seems to have succeeded. "I keep a selection of seeds in my shed, and even yesterday, when it was cold, Rose went running in, got a few packets, got the spade and started planting them. They're in completely the wrong place and I don't know if they'll survive the wet and the cold, but nonetheless, her impulse was to plant them." If Wilde's children are having great fun growing sunflowers and building wormeries, their mother isn't exactly missing out either. She admits that the treehouse she built was more to satisfy her own unfulfilled childhood desire to have one rather than to meet her kids' demands. "It's completely self-indulgent and they'd probably have been much happier with a Spongebob Squarepants video or something," she laughs.

It's clear Wilde has found a source of real fulfilment. She talks about looking for fairy rings as a child and says that she knows adults who maintain that sense of wonder about nature. "I never met anyone in the music business who saw a fairy, unless they were on something. But I've met people in the gardening world who have." For all her enthusiasm for gardening, Wilde hasn't completely ditched her music career. Since 2001 she's been appearing in the Here and Now tours, featuring other Eighties stars, including Heaven 17 and T'Pau. The pressure is off, and she's looking forward to appearing at festivals this summer in Belgium and Germany.

Although she still gets a buzz out of performing, Wilde has no doubts that she made the right career move all those years ago. "I knew that in having a family and trying to maintain an international career, one of the two was always going to suffer," she says. "It was easy to make the decision in the end." And so today, her conversation is not about being on stage but about being up to her ears in plants. She has several designs in progress: one for a family member, a show garden for teenagers at Capel Manor and a romantic Cumbrian-style garden, which will be featured at the Chelsea Flower Show, her first appearance there. "It's a great life and it's very rewarding," she says. "It's not a big money spinner, but that's OK." She opens the back door to let her Airedale terrier in and the image of rural family life is complete. As Kim Wilde's puppy starts chewing on my hand, it's time to leave. She might always be a pop icon to me, but if you were to ask her what she does for a living, "gardener and mother" would be her full and honest answer.

Gardening with Children by Kim Wilde is published by Collins this month at £14.99. 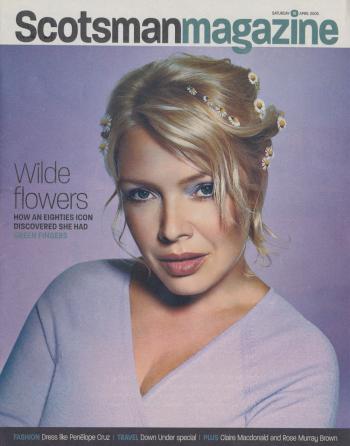 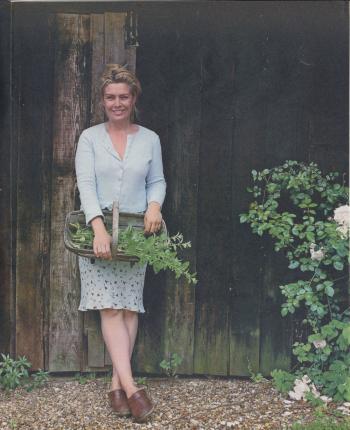 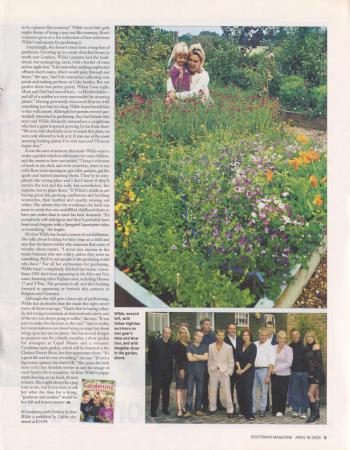 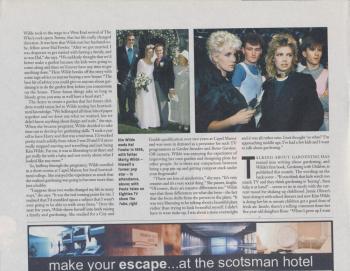