How we met: Oliver Tobias & Kim Wilde. 'He planted my herbaceous border'

West London-born Kim Wilde, 44, was a pop star in the 1980s. She studied gardening while pregnant and has since presented TV shows on the subject. Her first book, 'Gardening for Children', is published this month by Collins. Kim lives with her husband and two children in Hertfordshire.

The actor Oliver Tobias was born in Zurich in 1947 and moved to England aged 10. He has starred in numerous plays, TV series and films, including 'The Stud' in 1978. He is now directing his first film, has three children and lives with his second wife in London.

KIM WILDE
The first time I conversed with Ollie was when he phoned my husband [the actor Hal Fowler], who he'd worked with on a film called The Brylcreem Boys, and asked him who he was jumping! Hal said, "Well actually she's standing right next to me, and it's Kim Wilde. Here, have a chat with her." I thought, "It's that yummy guy who I've seen pictures of and I'm talking to him on the phone, how delicious!"

The first time I met him he came to ours with his girlfriend Arabella. They came roaring up the hill in his big, fat Chevy with the whole of Hertfordshire twitching their curtains. He's an incredibly charismatic person and I was immediately taken by that, as well as his obvious affection for my husband. We had a gorgeous afternoon and drank lots of red wine. It was the four of us, all very in love and all being together in the countryside; it was really sweet. After that, we went to Cannes for the festival, and then to Tuscany and stayed in his beautiful villa. I have a four-leaf clover from that trip that I framed and put in our loo.

Later that summer I had this very dramtic concept for the garden based on this planting plan I'd come up with at college, and I'd decided to rip all the grass out of one section. Ollie happened to be there doing some work on a script with Hal and he wanted a break so he came out and planted the whole border with me. So every time I look at this beautiful herbaceous border with all these grasses, I have the knowledge that I planted it with Oliver Tobias. How many people can say that? He's really got into gardening. I think I've had some small influence, but it's in his blood, he's a real nature boy.

We've never had a row, although he's got very firm opinions. I've only ever been charmed by him. There's a relationship between us that exists outside just me, him and Hal. We've had some long late-night chats on the phone.

We had some friends over for a barbecue a few summers ago and Ollie happened to be there working with Hal and took on the chef role. I don't think he had much on other than an apron and I think they were a bit surprised to have their barbecue cooked by Oliver Tobias. It's very like him, he has no airs and graces. He loves people, good honest straight talk, good wine, lots of laughter and he's got a great sense of humour.

We're doing a charity concert together in Manchester soon - it's for DebRA, the charity for people with Epidermolysis Bullosa, the skin disorder which causes blistering mostly in children. It's the first time Ollie and I are going to work together. I don't think he's going to be scary at all. I think he'll really help me through it.

OLIVER TOBIAS
My images of Kim Wilde were of the rock chick, an elegant and untouchable, fantastic-looking lady. I didn't know her in those days. I first met Hal when we worked together and one day I spoke to him in London and I said, "Who are you jumping on the bed with?" A while later, I drove down to Hertfordshire and met Kim in their country barn, which was quite a contrast to how I imagined her to be living. My first impression was she was very open and warm, no airs and graces. I very much approved of her as a girlfriend for Hal. She grounded him. He has a good sense of humour and a great direction in life, which I think helped her. It was a good combination and it's great to see the result now, with the children and everything. It's a blessing that they met and they're a great pair.

We rented a house in Cannes for the film festival and she came along and we became closer friends. Then another time I was on a recce in Italy and she came along with little baby Harry. She was this wonderful mother who breastfed this baby in the back of the Jeep as we roared around. We got to know what a down-to-earth, funny lady she is. We talked a lot about food and how it's cooked, and I took them to see friends who live a country lifestyle there with vegetable gardens and garlic growing and everything else. That was quite inspiring for Kim I believe, so I think I may have had a slight influence on her changing paths and getting into gardening.

I can't remember exactly when she became a full-blown gardener, but I remember helping her plant this herbaceous border. Gardening is only a fairly recent event for me, but I enjoyed it very much because it's very aesthetic, you really see the results. I don't have a great knowledge of different plants, although I'd like to. I'm really just a caretaker. Kim's the expert.

We go and stay with them a lot. I think I'm a good house guest: I make my own bed, do the washing up, gardening, cleaning, whatever you want. She's very uncomplicated and I can't remember ever disagreeing with her, although one time I think Kim told Hal and I we should go to bed because we'd been writing until God knows what time. We were told to get a grip and get some discipline back into our lives.

It's lovely to sit in the garden with some nice wine and food telling stories, getting a bit drunk. Those are the best moments. I discuss different things with Kim. With Hal it's very much work, but with Kim it's the more private side, gardens and children. She's just like extended family, really. I'm sure it's a friendship for life. 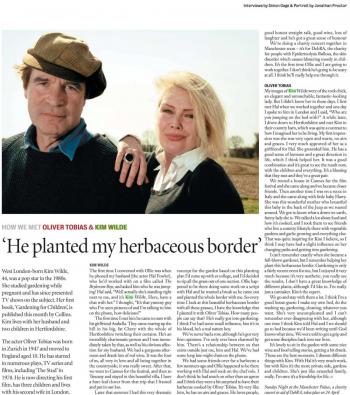