Alice Eaton talks to Kim Wilde about her journey from pop princess to gardening guru.

Kim Wilde may be used to wooing sell-out crowds with such hits as Kids In America and You Keep Me Hanging On, but now the 80s pop star has more domestic things on her mind. I have arranged to call the singer-turned-gardener at her Herts home to talk about her new book Gardening for Children, but there is a problem her puppy.

It appears that her new pooch has woken up at the exact moment I ring and this has thrown Kim into a dilemma. The puppy is demanding to be taken for its "walkies" - a fact Kim corroborates by pushing the receiver towards the canine so I can hear its distressed whines - and she is undecided whether to continue with the interview or delay it until after she has taken it for a quick walk around her garden. I hang on the other end while Kim dissolves into doting coos over the puppy and it is clear who the winner is going to be. I am asked to call back later that's puppy love for you. This choice of home life over professional life is typical of Kim's whole outlook and is the reason for her dramatic career change. That isn't to say she is not committed to her work, but everything she does now revolves around her family and the life she wants to build for them.

It was her marriage to actor Hal Fowler in 1996 and their plans to start a family that first prompted Kim's move into the gardening world.

"I was determined to get out of the music business and change my life completely. I had a husband and had changed my name, so the time was ripe for transforming my life," explains Kim, who is 44.

"I had been living in my barn conversion in Hertfordshire for six years, doing up the interior. When I got married, we wanted to have children but we didn't have a garden. I had concentrated on the inside but not the outside so the garden was like a blank canvas."

Kim decided to sign up for a course at the famous Capel Manor College in Enfield and was soon "completely hooked". "It had a big impact on my life. The tutors were fantastic and translated their enthusiasm to us and that was it I couldn't let it go." Before Kim knew it, she had been headhunted by the producers of ITV's Better Gardens to star in the show.

"I had no grand plans to get into television," explains Kim. "It all happened a bit too soon actually and I felt very self-conscious about it. I think at the time I was getting up some people's noses as there I was, standing alongside gardening experts with years of experience and I felt I hardly knew anything."It was a hard time but it was just a case of giving it a go. I was very aware of my shortcomings but I do have a genuine passion and enthusiasm for the subject and I think that translated to most people in the world of horticulture.

"I wanted to learn and I wasn't pretending to know it all I put myself forward as an enthusiast and a lot of people somewhere up high in horticulture could see that it was good to get a new face in gardening. I think these sorts of reality gardening programmes have transformed people's expectations of their own garden. They think, if an old 80s pop star with dyed blonde hair can do it, so can I."

And Kim hasn't looked back since. Although she tours with her music, "wherever people still want to hear Kim Wilde", she admits she is happiest when pottering around her beloved garden. "I'm happiest now, as every day I learn something new. For years, I had stopped learning. I could sing and write songs and, in my own way could do it with my eyes shut. It is inspiring to be learning again. I need to be challenged."

Kim is certainly living life to the full. As well as spending every day working on her garden, she has recently been signed up as the face of Wyevale Garden Centres and her garden design is soon to be seen at the Chelsea Flower Show in May. She has also just released a new book encouraging children to start gardening, based on the time she spends in the garden with her own children, Harry, 7, and Rose, 4. "They have their own vegetable patches and I give them trays of summer bedding plants," says Kim. "I let them loose with a kiddy trowel, some compost and they pot them up. They are genuinely interested in the whole process, from planting the seed to seeing the leaves sprout. The book is all about giving some ideas of how to spend quality time with the children in the garden. It is all about encouraging them to get out into the fresh air and observe the nature around them."

Kim's book Gardening for Children is published by Collins and is in the shops from April 4. You can see a garden designed by Kim Wilde and David Fountain at the Spring Gardening Show being held at Capel Manor College in Enfield, Middlesex from April 8 to 10. For more information, call 020 8366 4442 or visit www.capel.ac.uk 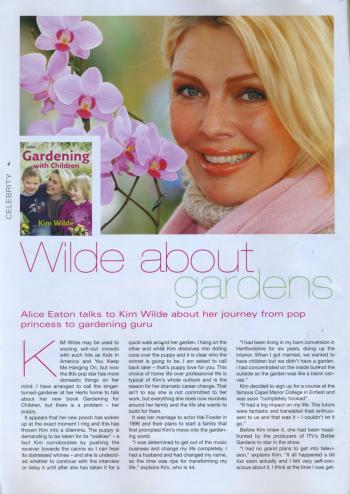 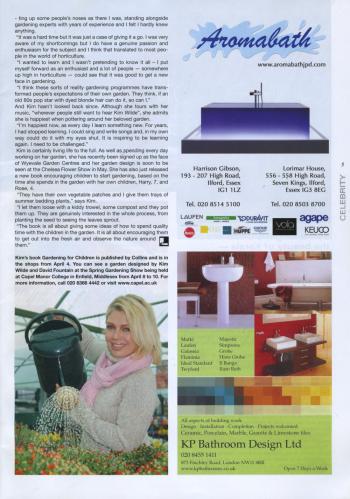