It's autumn and, says Kim Wilde, that means a riot of fiery leaf hues as ivies, shrubs and trees change their colours. Plus, as she too modestly mentions, Kim's won a pretty cool award.

Autumn will always have a special place in my heart; it reminds me of the pear trees at my old primary school, crammed with fruit and wasps, of the taste of blackberries, and the warm tints in the Hertfordshire hedgerows.
The glowing golds, reds and oranges of the seasonal leaves are so beautiful that I've been inspired to plants loads of shrubs and trees in my garden that are guaranteed to burst with colour come the end of summer. The best plants for truly stunning autumn shades include the resplendent climbers Boston Ivy and Virginia creeper, which attach themselves to walls and turn crimson-scarlet before they fall. Gorgeous sbrubs include Cotinus 'Grace', Euonymus alatus, and the shrubby tree Amelanchier lamarckii.

Autumn berries will fill your garden with interesting colours right through to winter, as well as providing vital food for wildlife, so look out for shrubs like Viburnum opulus 'Compactum', which is great for its beautiful translucent red berries, and good old Pyracantha, which is aglow with orange, red or yellow berries throughout autumn.
The 'season of mists and mellow fruitfulness' is the perfect time to clear out the containers you've been using for summer plants and fill them with a stunning winter display. Evergreens like Aucuba, box or Skimmia will look dramatic beside a few cheerful winter pansies, and shrubs can be moved from their containers and planted out in the garden after a few years.
This is also the moment to start planting bulbs in your borders or in containers. Daffodils develop their root systems much earlier than other bulbs and should therefore be planted sooner rather than later, while tulips can be left as late as November. The most important thing to remember when growing bulbs is drainage, so I always throw a handful of grit into the hole when planting. Settle the bulb in and cover it with roughly twice the depth of soil as the size of the bulb. This is just a general rule of thumb though - do read the instructions too.
Use a soil-based compost for containers - multi-purpose varieties can get very soggy and cause bulbs to rot. Even better, if your back's up to it, why not get out there and sweep up some of those leaves? Collect them in plastic bags punctured with a few holes, and leave them to decompose for eight to 12 months until they turn into leaf mould. When added to your planting soil in autumn containers, leaf mould will greatly improve its quality and structure - and if there's any left over, apply it as a mulch in spring.

Where the wild things are

I really think it's important for gardeners to help protect wildlife, so don't rush to tidy up the garden by cutting back seed heads on plants - these provide much-needed food for birds as well as making dramatic, decorative silhouettes throughout the winter. It helps to make sure that what you plant is varied too - then not only will it look lovely, but it will also support more wildlife. The Cumbrian fellside garden that Richard Lucas and I exhibited at Chelsea in May focused on wildlife by including a mixture of native trees, shrubs and wild flowers and contrasting them with cultivated varieties.
And speaking of that garden we designed, it was exciting enough having it accepted in the first place, but achieving Gold, Best in Category, and a People's Choice award made this particular Chelsea show one of the most amazing experiences of my life. After that, all I can say is... If you have a dream, to do anything at all, then face your fear and just GO FOR IT!

And the winner is...

Carved from a gently sloping Lake District plot, Kim's romantic Cumbrian garden was inspired by majestic fells, ancient lakes, Beatrix Potter and Wordsworth.
A constant trickle of water was guided gently through the garden by a rill - a wonderfully simple and relaxing feature. The rear of the garden was mostly wild, with nature held back from its attempt to reclaim its former territory. Wild flowers pushed their way up through the long grass and burst from crevices within the dry-stone walls. At the front of the garden, Kim planted Aquilegia, geranium, Linaria and Astrantia. Natural Cumbrian slates were used as flagstones and to retain the wild-flower bank, while a narrow pathway led out from the garden over a stile and onto the fellside. Beautiful! 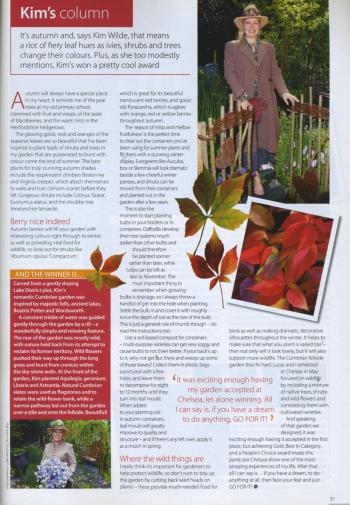 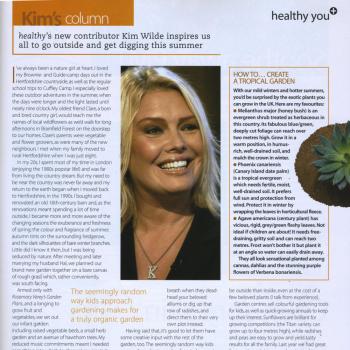 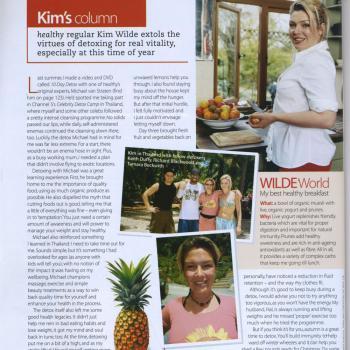 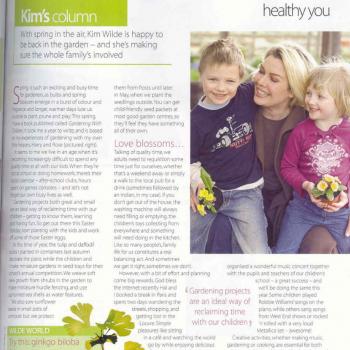 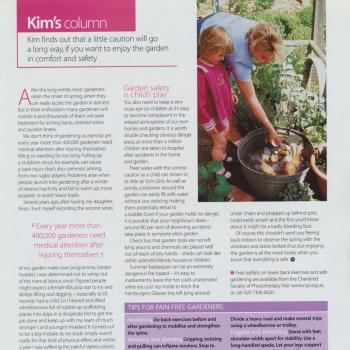 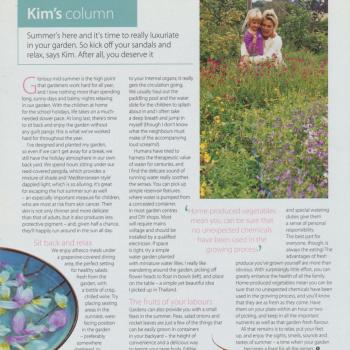