In 1986, I received a phone call from Laurent's record company informing me that a song had been written about me and that its author wanted me to participate in one way or another in the recording the disc. I have to admit that I was flattered and amused because I had never heard of Laurent Voulzy. However, at that time I had become a real fan of French pop music and I owned several albums by Etienne Daho that I adored and Alain Souchon. I was intrigued to know who this French singer was.

Before hearing 'Les nuits sans Kim Wilde', my inclination only led me to this record which seemed to me to be a fantasy. The song arrived at our family studio one day. Ricky (my brother, author and producer) and Marty (my father, author and discoverer of new talent) came to listen to it, convinced that they wouldn't like it.

We were surprised to find that it was a great pop record, with a catchy rhythm endowed with an irresistible energy. We immediately contacted the record company and a few weeks later Laurent was in our studio in Hertfordshire. I remember his excitement, like that of a child let loose in a candy store or a puppy happy to see you waking up in the morning. We all fell in love with Laurent and a few minutes and, very quickly, while he was doing his vocalizations, my father had the idea of ​​asking him to remove his glasses ... Brilliant!

A month later, I was in Laurent's studio in Paris to hear the final mix. I was blown away. Laurent then asked me to appear in the video clip. My adventure with Laurent is one of the happiest episodes of my career and working with him in France, in several TV shows, has been a most entertaining experience. His energy and his love of music have proven to be contagious and I am not surprised to see that his talent as an author and singer continues. Thank you Laurent for inviting me into your wonderful world. 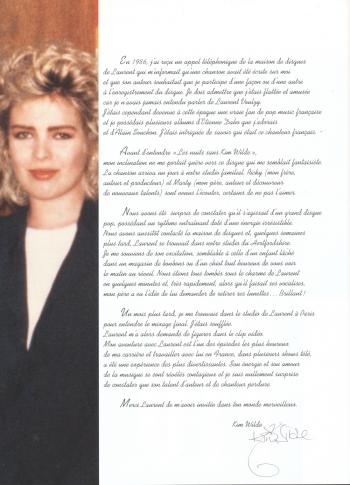