If you're looking for fun, healthy and cheap things to do to occupy the kids tomorrow, to keep their minds off the hordes of sweets they'll gather on their early-evening rounds, you need look no further than out the window. Ever since '8os rock star cum telly gardener Kim Wilde brought out her book Gardening with Children earlier this year, adults and kids alike have been digging into a host of easy-peasy gardening projects. What's been 'growing' on reluctant gardeners is the fact that her fun tasks don't so much involve The Great Outdoors as the small patch of green that most of us can call our gardens. The publisher's blurb claims that it's the ideal companion for school holidays - in fact it's actually a very down-to-earth guide to getting miniature couch potatoes out into the crisp autumn air.

Fascinating Ghoulish little monsters, who are six years old and upwards, may want to dig up worms and transfer them to their home-made wormery. Not only will the kids have a fascinating look at how worms turn organic waste into fertile soil, but they'll also have a living toy to feed and monitor to keep them occupied throughout the mid-term break (The worms should be returned to the earth after a couple of weeks).

Another task from the autumn section will help in getting rid of the mountains of peanuts after Halloween. Listed as being suitable for kids over four years but supervised by an adult, they can make their own balls of bird feed with nuts, candied fruit and suet and hang them on trees.

Other colourful and crafty things to do that don't depend on the growing season include making tough, stone-like pots that need about a week to dry out in warm conditions. Or for a faster choice, simply decorate plastic ones with beads and mosaic tiles. But it isn't too late for planting either. There's a picture step-by-step guide for Kim's suggestion of peas and flower bulbs, that could get you started.

"Or broad beans can be planted now and into November", says Clonee garden guru Andrew Glenn-Craigie. "They can be sown straight into the soil and if you can cover them to protect them from frost, they'll be ready to pick early next year."

When Sunday World visited the Glenn-Craigie family nursery in the western outskirts of Dublin, sons, 12-year-old James and Oliver (10), gave us city slickers the low-down on winter gardening. James planted the garlic cloves, which will be harvested next June or July, while Oliver sowed the broad beans. "For the garlic you need to dig in a mixture of compost and sharp, silver sand that you can buy at garden centres and plant the cloves about five centimetres deep", says Andrew. "They'll appear above ground after a couple of weeks and you need to keep them weed free."

For those of us who would pull up the garlic seedlings along with the weeds, Andrew recommends planting them in a row that's marked with a colourful reminder, so you just pull up everything on either side of the line.

While Kim Wilde's way of keeping away birds is a child-made scarecrow, the Glenn-Craigies have made use of all the free cds and dvds from weekend newspaper supplements. "String 'em up and they're actually useful", he grins. The types of early peas to look out for at your garden centre are 'Feltham First', 'Meteor' and 'Douce Provence' as they can be sown from mid-winter to early spring. They're hardier than other types of peas but the seedlings will still need to be protected from frost with a cloche. You can buy cloches in garden centres or simply chop off the tops of clear, two-litre bottles of minerals for a home-made version. Place the plastic 'bell' over the seedling and firm it into the ground around the plant.

"If you have a glasshouse or frame you can grown scallions, all-year-round lettuce, winter purslane or some of the hardy Chinese greens", says Andrew. But if you've princesses to attract outdoors rather than would-be farmers, a kaleidoscope of flowers may be the way to go. "It's probably a bit late now for flowering bulbs", says mum Jenny. "Except for tulips, that is. All the others such as hyacinths, crocuses and snowdrops should really have been planted by now. The bulbs will have been sitting in shops and garden centres since the end of August so they're a little past their best. But tulip bulbs can be planted right into November."

If by chance, unlike the Glenn-Craigies you haven't been growing your own gourds and pumpkins to harvest now and carve into Jack O'Lanterns, our price-check at  the beginning of the week showed Dunnes Stores to be the winner at €1.99 per pumpkin, with some garden centres selling them for as much as two for a tenner and Superquinn holding the middle ground at two for a fiver.

But next year your Halloween outlay could be even less. "Collect the seeds and dry them in the hot press", says Andrew. "Store them in a brown paper bag until April when you can plant them in small pots or discarded paper coffee cups. Keep the seedlings indoors until they're about 10-15cm high when you can plant them out at about the end of May. If you want giant ones, feed them with well rotted manure, and you can carve your own pumpkins next year."

But the horticulturist dad suggests collecting the seeds even if you're not going to plant them out. When you've roasted them, they make a delicious and healthy, home-made snack. 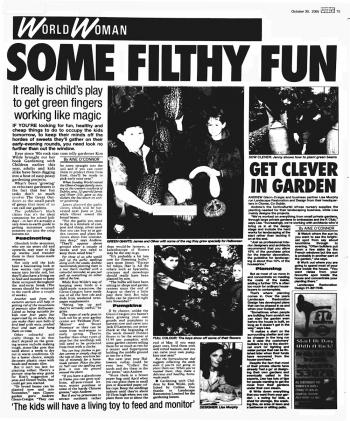