The passions of Kim Wilde

If anybody told Kim Wilde 10 years ago she would hit the charts, she probably wouldn't have believed it herself. But look... after a remarkable come- back with Nena in 2003 the 'love blonde' has plans for a new record.

With Kids in America all musical doors opened for Kim Wilde in 1980. After this worldwide hit 10 more hit albums and about 30 hit singles followed. Despite her sabbatical period in which she presented several British TV shows about gardening and in which she also wrote columns for national newspapers, she could not resist the temptation of music. In 2001 the bonus track 'Loved' was released in Belgium with a number seven in the charts as a result. Two years later the duet 'Anyplace, Anywhere, Anytime' stranded on number 2 in the Belgian charts and number 3 in the German hit lists. Ever since Kim is touring the world with her 'greatest hits'.

May we mark the duet with Nena as a turning point in your career?
Definitely. Although I didn't feel it quite like that at the time. I just didn't know what would come out in the end from this. Nena is a friend of mine from the '80s. She asked me to record a song with her. I did it because she asked me personally. 'Anyplace, anywhere, anytime' eventually became a big hit. Suddenly I was appearing in Top of the pops and MTV again. The last few years I'm busy with an 80s show. Every time it is pure fun and always something to look forward to. Now there is some interest to record a new album. It is appealing...

You seem to doubt?
Yes, a little though. (Sighs deeply) It is hard work. I am in a fortunate position right now. I'm hands on with my children, I take part in flower shows and I write a great deal about it (Kim Wilde recently released her first book 'Gardening for Children' - ed.). I love spending my time at home with my family and I'm afraid that with a new record out I will have to travel a lot again. But I have decided to give it a chance. The album will probably be in the stores next year. I will write songs again for it. I'm looking forward to it. When I just got married, I didn't want it anymore. The first thing that concerned me then, was that the garden got a proper design (laughs). Now, everything is different. I'm married for 10 years and I have children. This broadens your view. I still get a kick out of performing live on stage and I can count on a good reaction from the audience. I even get a better response now than in the '90s.

How important are fans for you?
I have a good website. Thanks to the webmaster I'm in direct contact with my official fan club. I like to keep in touch with the people that supported me all these years. It is good to know they are there. Although I am very set on having my private life. Once I'm home and the door is shut, I don't want to be disturbed.

What does gardening mean for you? Is it your escape from the 'ordinary' life?
I started gardening as a sort of therapy. I suffered from severe stress caused by all the travelling. I used to be on the road all the time. As soon as I got home, the garden was the first place I was looking up to rest. Pesticides, chemicals... our world is under a constant threat. But fortunately a new movement is on its way. People want to go back to the organic and are striving to a healthier way of living. That's how I feel about it. I recycle a lot of house- and garden waste. This is a little step to get nature back in balance again.

Is there going to be a successor to your book 'Gardening for Children?'
At the moment I'm writing a book with Richard Lucas, the man with whom I participated at the Chelsea Flower Show (both won their first gold medal this year - ed.). The book will be called 'First time gardener'. It is ideal for people like me seven years ago who knew nothing about gardening at first. Together with Richard I'm planning for the next Chelsea and other flower shows we would like to do together. It is key for me to find a good balance between my passion for gardening, music and my family.

Last question... how would you like to be remembered later on?
Oh, I don't keep busy with that too much. I'm a lively person and everything I do is an expression from that. Gardening is the ultimate way to say you're optimistic and lively. These are the things I want to pass on to my children so they realise they have to take care of our planet too. 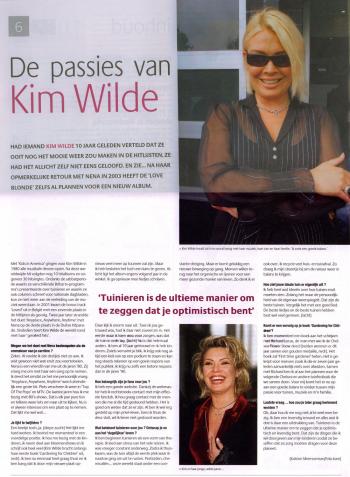