Wilde about my 40s

She was the country's biggest pop star at 20, but for Kim Wilde true contentment has come only recently. She shares the secrets of her mid-life happiness with Josephine Murray.

At 44, Kim Wilde still has the blonde hair, beestung lips and drop-dead curves she had as a 20-year-old pop star. But, with a fresh air glow from her new horticultural career, Kim exudes an ease and confidence that eluded her then. 'When I was prancing around on Top of the Pops, I didn't really know who I was', she says. 'I felt terribly vulnerable - I was very young. I was anxious about everything, from the way I looked to how well my next single was going to do. Of course, there were a lot of fun times and I was very lucky in that my dad, Marty, a pop star in the 1950s, was right behind me all the time. But I'm so much happier and more confident now.'

Presenting gardening slots on television and writing newspaper columns, Kim's recently found fame again. She also takes part in 1980s music tours and has just written a book on gardening for children. But this time she's juggling celebrity with family life in the Hertfordshire countryside with her husband, Hal, and two children, Harry, seven, and Rose, five. 'At 37, I was an older first-time mum!' she laughs. 'But I'm so glad I settled down late. I had the chance to have a career, travel and enjoy myself, so when the children came along, I really appreciated them. And now we're trying for a third child.'
Despite her busy life, Kim doesn't have a problem with stress. 'The ultimate stress buster is being out in the garden - you never see an unhappy gardener! And I look after myself well. I go to the gym three times a week and I eat good food, which helps me cope with pressure. I'm very rarely ill these days.'
Taking part in Channel 5's Celebrity Detox two years ago taught Kim a lot about health. 'Before that, I'd try faddy diets every now and again. But the detox taught me about eating properly, and now I follow a detox by naturopath Michael van Straten twice a year. The rest of the time, I live on a healthy balance of home-grown or organic fruit and vegetables, live yoghurt, two portions of fish a week and lots of rye bread. I also eat soya products because I know they can help with menopausal symptoms. I'm not there yet, but I want to be prepared.' A sunny outlook is also vital to Kim. 'I believe if you fill your head with positive thoughts, you'll have a great day, every day. I have so much to be grateful for and I count my blessings all the time.'

But Kim admits she hasn't always been so positive. 'In my mid-30s, I had a huge crisis. I'd put everything into a new album that was supposed to be my comeback, but it was a flop. I was devastated. I was a 36-year-old, unemployed pop star. I'd had a string of failed relationships and felt that I was never going to meet someone to share my life with, or have children.'
Realising she needed a change, Kim took a break. 'I'd worked solidly from the age of 20 and had never taken time out for myself. So I went backpacking to Thailand, Australia and America. It was fantastic and for the first time in my life, I started to really get a sense of who I was.' While she was away, Kim decided she'd had enough of the music business and back in the UK, she threw her energy into converting a 16th-century barn house into a home. 'Once it was completed, though, the house felt really big and empty - it desperately needed a family to fill it. That was a very lonely time.' But fate was about to step in. Kim agreed to join the West End musical Tommy, and it was there that she met Hal, an actor, producer and director. 'We had an enormous amount in common, both coming from very close families with strong values'.
Seven months into the relationship, Kim and Hal married, and shortly afterwards, she fell pregnant with Harry.

It was while pregnant that Kim enrolled on a planting design course at a local college. 'I wasn't intending to find a new career, but I loved it so much that I knew I had to pursue it. Designing gardens fulfills my creativity and nurturing plants is incredibly rewarding.
'I think women in their 40s often open up to the possibility of doing something else and finding a new identity. I'd say if you're interested in something, go to your local college and find out about any courses you can do. You might end up making a career out of it, but even if you don't you'll have new experiences.' And ironically, it was her new career that gave Kim the confidence to go back to her old one. 'I thought I'd had it with the music industry, but I feel so sure of my place in the world now that when I was asked to take part in the 1980s reunion tour with bands like Duran Duran, I said yes. It was very refreshing. Last time I was on stage I was a size 10, now I'm a 14. But for the first time in my career the audience didn't care what I looked like.'
Kim does go to the gym three times a week, but says, 'Trying to keep a good figure is now more to do with vanity - I want to be sexy for my husband.' And she isn't tempted by cosmetic surgery. 'It doesn't appeal to me at all. But that's easy to say - if something started to bug me, I wouldn't rule it out. Fortunately, I have good skin and bone structure, and my mum taught me a beauty routine, so I've been looking after my complexion all my life. Hopefully, if I carry on doing that, I'll still look - and feel - good into my 50s and 60s!'

Have a massage once a month to boost wellbeing and make you feel pampered.
Take evening primrose oil and vitamin B6 in the two-week run-up to your period if you're still getting PMS.
Always shell out on good moisturisers, I'd love to live on Creme de la Mer!
A long soak in a candle-lit bath, with lavender oil, is an inexpensive pleasure. 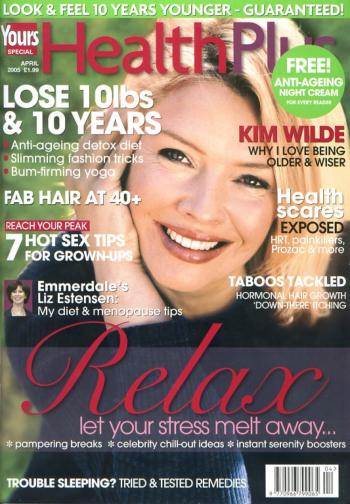 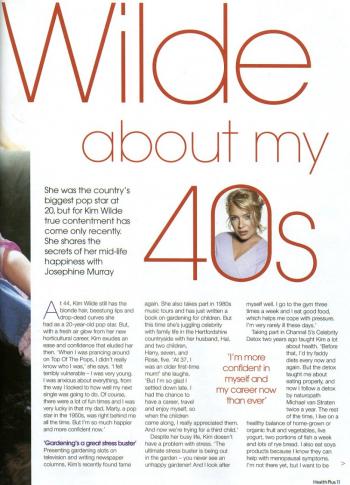 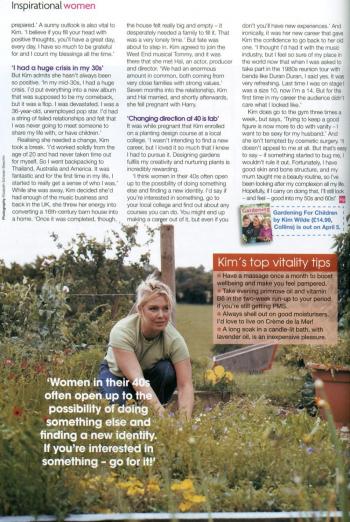