Kim Wilde was the biggest-selling British female artist of the 80s in the UK, and her records remain highly collectable.

While there have been umpteen covers of some of her classic tracks (Kids in America has been pillaged by jazz, indie, industrial, rock and metal acts, ranging from Lawnmower Deth to The Bloodhound Gang), the evergreen and green-fingered singer also has a large number of rarities in her catalogue. These range from European promo sleeves and exclusive mixes, to US 12" club remixes and elusive one-off releases. Although she may not have released any new studio material since the mid-90s, prices for Kim rarities remain healthy, and Ash's Charlotte Hatherley paid homage with her Kim Wilde track in 2004.

While the Rare Record Price Guide lists several of Kim's UK singles at £ 12 each - from 1984's Second Time 7" picture disc to 1989's Love In The Natual Way CD picture disc - Kim collectors can pay more than £ 50 for the 5" CD version of 1988's three-track You Came CD. While the RRPG notes that it was unreleased, copies of the CD slipped out. Similarly, a 1995 test pressing of the Breakin' Away Matt Darey mixes (of which only 10 copies were pressed) sells for £ 50. UK limited-run poster editions of her Love Blonde 12" and Dancing in the Dark 7" RAK singles are sought after and fetch £ 15.
Kim also contributed an exclusive version of the Teases and Dares album track Shangri-La to the short-lived Debut fanzine, which included a free album of mixes by various artists. She also sang and acoustic Freight Train cover on the SFX cassette fanzine in 1983, which you'd do well to find now (£ 20). A similar asking price applies to the German 12" versions of her RAK singles, with 'Super Sound' versions of Kids in America, Chequered Love, Water on Glass, Cambodia, Love Blonde and Child Come Away commanding the most interest on these shores. In addition, the Germans were treated to a 12" extended mix of the Ferry Aid charity single, Let It Be, to which Kim contributed vocals, and the non-UK Schoolgirl singles. One of the Holy Grails of Kim collectables is German - an unconfirmed Turn It On 45 that was sticker-advertised on the Weird Science soundtrack, for which the track was exclusively recorded in 1983. A copy of it would fetch three figures. There's also a 1982 Japan-only Take Me Tonite single for soundtrack use which fetches £ 30.
During her early-80s heyday, Kim was the subject of several US club DJ-only 12" remixes, including a Disconet version of the Select album track, Sparks. Such limited-run vinyls (some of which were coloured and all in custom sleeves) are worth around £ 25. Most of her 80s US singles received similar treatment (some of them by more than one remix outfit) and command similar prices. Coloured-vinyl 12" singles from Colombia were prevalent in the mid-80s and regularly made up to £ 80, though their peak has passed.
As for variant picture sleeves, there are a host of European alternatives to track down. In France alone - where Kim was dubbed "the Brigitte Bardot of pop" - there's the unique sleeve for Bitter is Better (which has the added value of an unedited mix of the song, pictured opposite); Chequered Love with an unedited version of Shane on the flip (also pictured), a promo-only sleeve variant for You Came, alternative artwork for the Another Step album and cassette, and exclusives such as the House of Salome 45 (culled from the Very Best Of collection, issued in France months before it appeared in the UK).
Other countries were treated to sought-after variant sleeves, not least Japan, where a promo of Bitter is Better was on offer for £ 75 in the late 80s, which you'd do well to find now. Similarly lofty prices were commonplace for other Japanese promos, as well as UK box sets such as Close, which included a demo tape, promo photos, biography and a foldout box, as well as for acetates such as the exclusive US instrumental version of Say You Really Want Me (£ 80). Then there's the tricky issue of umpteen Russian postcard picture disc releases, unique Polish cassette compilations and Spanish-titled releases.
Kim fans were never treated to a live album - odd given that her band in the 80s included the likes of ex-Gillan man Steve Byrd on guitar and put on a blistering show. Dozens of soundboard bootlegs did the rounds in the late 80s, notably from France, Germany and Holland. During her shows, she belted out otherwise unreleased covers, such as When The Boy's Happy, Big Hunk O' Love, Fever, Bye Bye Love, Premiere Rencontre, Dancin' in the Streets, Teddy Bear and Shake, Rattle and Roll.
Similarly, fans have been frustrated by the lack of out-takes to appear on 90s compilations, even though Teases and Dares reel-to-reel demos were auctioned off a decade ago and a Kim Wilde demo disc was up for grabs as early as 1982. Furthermore, fans would like to nail rumours about Kim lending backing vocals to various recordings cut by her songwriting father, Marty, and brother Ricki. She contributed backing to the likes of Johnny Hates Jazz, as well as charity singles including Spirit of the Forest, and collaborated on Laurent Voulzy's French 7" and 12" single tributes, Les Nuits Sans Kim Wilde. Clearly, there's plenty of scope to gather Kim's extracurricular work, as well as non-album B-sides such as Back Street Joe, and her catalogue is ripe for revisitation. With her continued bill-topping success on the Here And Now tours in December 2004, a remastering programme should only be a matter of time.

[Note: Read also the Comments on the article in 'Record Collector'.]

Tell us about your latest project.
My latest projects include a children's gardening book, which is out in the spring, called Gardening for Children. It's based on my own experiences with our children, Harry and Rose. It's taken a year to put together and is my first book. I'm also very excited about the prospect of having a small Courtyard Garden at Chelsea 2005, which we are on the verge of confirming with the Royal Horticultural Society.

What else have you been doing recently?
I had a big hit with Nena - 99 Red Balloons - in most of Europe which was fun to be involved with. I still do some summer festivals, doing my 80s stuff, and I've really enjoyed the Here And Now tours each December in the UK. I'm also a journalist now and I'm currently writing for Healthy magazine, having also written for Prima, Bella and The Guardian. I also have all kinds of different gardening projects, including show gardens at Holker Flower Festival in Cumbria, at Glasgow, and in Hampton Court, as well as private commissions. I am, of course, also an extremely hands-on mum.

What upcoming projects have you got?
There's a chance I may be writing songs again this year, which I'm really looking forward to after such a long break.

What was the first record you bought?
Judge Dread's Big 7.

What was the last record you bought?
Rufus Wainwright's Want One. Fantastic!

What's your favourite record ever?
The Beach Boys' Wouldn't It Be Nice.

What's the most interesting/valuable record in your collection?
I have some original Frank Sinatra I pinched from my Dad, as I'm a big fan. My husband Hal and I danced to I've Got You Under My Skin at our wedding.

What little known fact is there about you that would surprise fans?
I hate having my feet touched in bed.

Have you any unfulfilled ambitions?
To live life to the full, which means that new ambitions come along all the time. Exhausting stuff, but the stuff of life. 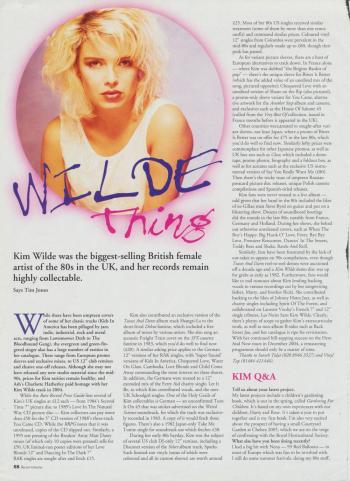 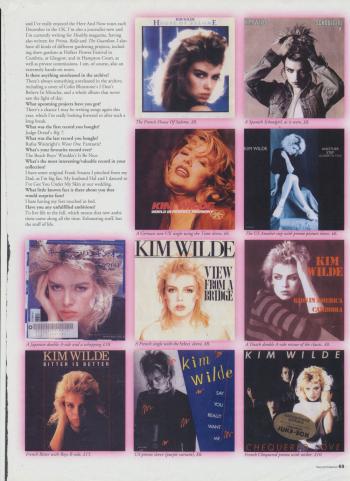