Diary of a friendship

Singer and gardening enthusiast Kim Wilde met Clare Smith when she was just seven years old. Over three decades later - through first jobs, boyfriend trouble, career changes, marriage and babies - they remain as close as ever.

Meeting for the first time

Kim: My parents moved from south-east London to Ball's Green in Hertfordshire, just round the corner from Clare's house.
Clare: We came from completely different backgrounds. I was a real country girl, born in Hertfordshire, and I'll never forget this strange girl from London with a pop star dad.
Kim: I loved going round to Clare's. There was always a home-cooked dinner on the table at six o'clock and I was very impressed by Clare's mother and father. My parents were still kids, really. My mum was only 28. Clare's parents had a fantastic garden full of beautiful flowers and vegetables at the bottom. There was always a smell of flapjacks baking in the kitchen.
Clare: I loved Kim's house because of their irregular lifestyle. You were allowed to open the fridge and get yourself something to eat whenever you wanted. Also, getting up in the morning seemed to be a bit of a precarious business. Kim's family were always late, charging down the road still pulling their clothes on.

How Clare shaped my life

Kim: Clare introduced me to all the flowers, showed me woodland walks and how to climb haystacks, collect hazelnuts and pick blackberries. It was a whole new world.
Clare: Once, we were sitting on a haystack when we saw a fox charge past in one direction. When the huntsman asked us which way it had gone we both pointed the opposite way and then nearly fell off the stack as we were laughing so much.

Kim: We worked together in a carnation greenhouse. It was absolutely mindless, but gave us the chance to chat incessantly.
Clare: Yes, or weep all over the carnations. Kim opened her O-levels results while we were there and burst into tears because she thought she'd done so badly. When I took the paper off you it turned out she'd actually passed more exams than she thought.
Kim: Well, there you go. Even when I had brown hair I was behaving like a blonde.

The two went separate ways when Clare went to study occupational therapy at Oxford and Kim stayed at home while she did a foundation course at art college. At this point her pop career kicked off when she sang Kids in America by her brother Ricky. It became an international hit and Kim suddenly found herself touring the world and performing.

Clare: I never once felt envious. Nothing about her as a person changed and neither did our relationship. The things that continued to be important to us, what our friends were up to, that kind of thing, were still the things we talked about. But I do remember seeing her in concert for the first time and just standing there with tears welling up in my eyes. Deep down I think Kim always had this sense that something like that would happen to her. I remember at school when I lost my hymn book and she found it and wrote in the front: "Dear Clare, you silly old cow, you left this in the science room. Love Kim - just in case I'm famous..."
Kim: It all happened so fast that I felt I was gate-crashing a pop star's life, but I was still one of the girls. We had a close-knit circle of friends from school and we called ourselves "The Biddies". I did go through a phase of trying to get them all into nightclubs for free, but I'm not really a blagger and it was very embarrassing when the answer was "no".

Clare: In our twenties, we lived near each other in north London. Kim was touring and I was working as an occupational therapist in a hospital, but wanting a change of career. I've always loved cooking and Kim put in a good word for me at a catering firm she used when touring, one condition being that if I worked there I could travel with the band.
Kim: In that crazy world it was terribly grounding to have a real friend there. Once I was supporting Michael Jackson, feeling completely overwhelmed by his fans. Clare arranged to have a huge banner made for me in the crowd, so that when I went on stage, there it was.
Clare: When I was catering for other bands, like Dire Straits, Kim would sometimes fly out to join me at the weekends when we were touring and she'd put on her apron and help me dish out the food. I'll never forget Mark Knopfler, the lead singer, saying, "What's Kim Wilde doing here, serving me breakfast?"

Kim: I suppose it's natural for close friends to hit the odd rocky patch and there have been a couple of occasions with Clare when things have become slightly awkward between us. The first time was in our late twenties. I was having a difficult relationship with a guy I knew Clare didn't feel was good for me. Coincidentally, she was also having problems with a boyfriend I didn't feel was right for her.
Clare: There was a short period of backing off between us. I suppose we didn't really know what to say to each other, so we just waited to see what would happen. And then she turned up at my flat in the middle of the night in floods of tears, we opened a bottle of wine and talked on and on.
Kim: It was all very consuming. We both were, and are, very passionate one-men women and it broke our hearts. It was hell.
Clare: The second time was later, when we were in our thirties. I'd decided to set up a catering company with a couple of friends; two other girls from "The Biddies", as it happens. Despire everybody saying it was bad to mix business with friends, we felt we knew each other well enough, but unfortunately, everything went wrong and the company failed. We lost money, but more importantly the friendships suffered too.
Kim: One of the girls was a close friend of mine as well, which was difficult. I found myself navigating a careful path because I could see Clare was in an awful position. It was awkward and because of that we probably didn't discuss the problems she was having as much as we might have done otherwise.

I was bereft when Clare moved abroad

Kim: Hitting 30 was a difficult time for me, coinciding with Clare moving to Holland to set up her own catering business. I was really excited for her, but bereft at the thought of being alone. I bought this old barn, where I'm living now in Hertfordshire, and did it up with money I'd made from singing. But my career was going downhill and I was getting bored. I kept looking at other female artists of a certain age and I didn't want to end up like them, with just a gold record to cuddle up to in bed. I moved into this big old place on my 30th birthday feeling really lonely. Clare would come over and see me at weekends and we'd have such a fantastic time, then she would go again, off to Holland. I can vividly remember standing at the door when she was leaving, struggling not to cry and wishing, more than anything, that she could stay with me. I would have done anything to persuade her not to go.
Clare: I'd always liked Holland when we were touring and decided it would be a great country to run a business in. I loved the Dutch way, their approach to things and, this might sound funny, but because I'm 5ft 10 I thought there was probably more chance of meeting a man who was taller than me in Holland because Dutch men are generally very tall. Sure enough, within a few years I'd met Patrick. In the beginning it was hard because I knew how unhappy Kim was. On the surface she had everything - a lovely house, money - but, like me, she was suddenly looking at her life and realising that the things she really wanted, like a husband and children, weren't there. That's one of the things that connected us. The sense that our long-term aspirations were exactly the same.

Visiting Clare one weekend in Holland, Kim decided to finally end her pop career and take a new direction. Within a few years, both women had met their partners. Kim was married in 1996, within eight months of meeting Hal, who appeared with her in the West End musical Tommy, but Clare and her partner Patrick haven't married.

Clare: Yes, it's a sticking point, actually. He just won't. I think that's quite a Dutch thing.
Kim: It's become a bit of a joke among us, though. Luckily Patrick and Hal get on really well, so it's lovely and easy when we all go on holiday together. They're quite similar - both very into gadgets and technology.

Embedded in each other's lives

Kim: Clare's childhood garden had a big impact on me and I wanted my own kids to have something similar. I signed up for a gardening summer course and then somehow managed to land myself a job doing garden makeovers on TV. I'm incredibly grateful for the opportunity, as I really had no idea what an unemployed pop star was supposed to do with the rest of her life.
Clare: After having my second child, I had to have a hysterectomy and Kim dropped everything to fly over to Holland and help. While she was staying with me she started to do some sketches, designing my garden, and we've since gone ahead and used all her ideas. It's lovely to look out at the garden, knowing my closest friend designed it.

Kim: Even though she lives in Holland, Clare is still the person I call if I need that touchstone in life. We know each other so well there's almost a shorthand to our communication. Because of all the history behind us and because we've been there for each other every step of the way we don't need to explain ourselves or our actions like we might to other people.
Once, when the kids were small, I was feeling really stressed and rang Clare. She made me see that I was being a hostage to work and not proactive enough about taking time off. I'm not sure anybody else could have seen that in the same way. We made a pact there and then to book breaks, in advance, so that there would be guaranteed fun time together. It's really transformed things for me because now each year I have time to look forward to when I can go away with Clare and the children and relax properly.
Clare: We go to Center Parcs in the autumn without the men and then each summer I book an old manor house in the Dordogne and everybody piles down there for an incredibly noisy and chaotic fortnight. It's lovely because Patrick and Hal take care of the kids, so that Kim and I can go and wander around the market, and everybody swims a lot. The kids love it because they're all around the same age and have known each other since babies. Then, when we've finally got them all into bed in the evening, we can open a few bottles of wine. It's just like the old days again. 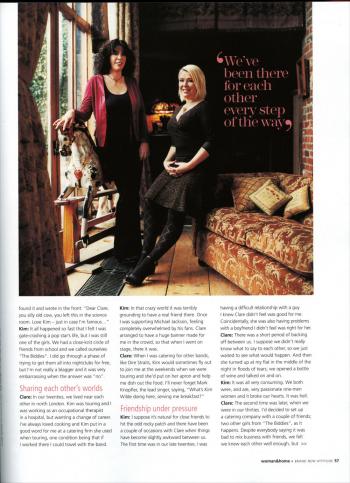 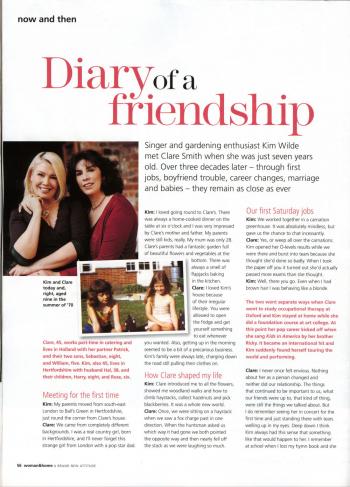 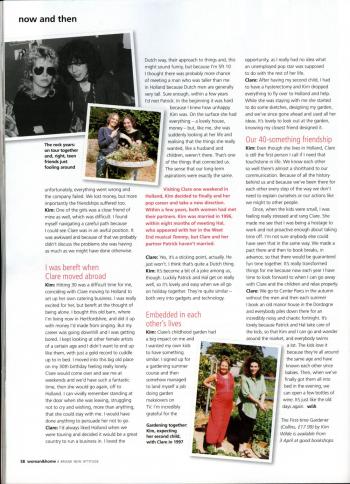