In the eighties the blonde Kim Wilde (45) was a superstar with hits like 'Kids in America' and 'Cambodia'. The French still see her as the Brigitte Bardot of rock, the German worship her as the most sexy singer ever and in England she is still the best selling solo artist. Despite all that, it became a little too much for her. She said goodbye to showbizz, married her big love, had children, went back to school, devoted herself to a prizewinning career in horticulture, made a television programme and a book about it and was rude to her old fans. Now she makes her comebcak in the music world with the album 'Never say Never'. Kim Wilde is a cat with nine lives.

Appropriate title?
You might say that. 'Never say Never' has become my motto. Long time ago I would never have thought to have a career in horticulture. I even went back to school for it. Or that anyone would say: in ten yours you will have a comeback in music. Or that I would win a gold medal at the Chelsea Flower Show. Or that I would fall madly in love and have two children. I would have thought they were crazy! I have come to a point where I think that you can never rule out anything. Your life can change in seconds.

You had a feeling that you gave up music, but music never gave you up.
Exactly, when I met my husband Hal, we had children and I started studying horticulture, music had little to offer to me anymore. I was focused on a quiet life, with lots of time and space for my children. There was still music around, but it was theatre music from my husband, who is actor and singer. a good friend of ours is a pianist, so most of the songs were live theatre pieces and opera. I never liked musicals much, but I have discovered some beautiful things.
What drew me to this project, is the eighties tour I did for five years in the UK and Australia. It was great to be on tour with the Human League. We were very successful. I rediscovered my voice and my love for the stage. I found out that I was better than I recalled.
Then the success with Nena started, with the single 'Anyplace, anywhere, anytime'. It came out of nowhere for us. I did a little tv and a little promotion and went back home. But I think the seed for this project was sown then. It was only a matter of time, really.

It's been 25 years since 'Kids in America' was a hit. What is the difference between Kim then and Kim now?
A lot has happened. I only got married when I was 36. Baby Harry came when I was 38, I was 40 when I had the second child. The first years were heavy. I am glad that the baby phase is over now, but when the children came my life took on some meaning. There had always been part of me looking for that feeling. When I found it, I really changed, because it was right in front of me now. It felt liberating and it gave me energy to do things. When you're 20 you look around the corner for what's going to happen. It's good, because it keeps you going. You stay alert, you travel, you're always searching for answers.

Are there any parallels between gardening and music?
You can hear about the environment on the album. 'Forgive me' is about the environment and the damage we have done to it. You can hear the love for nature in it. For this album I have written four new songs. I hadn't done it for many years. But there will be more albums.
When I got married, I didn't want to share anything anymoer. I had the feeling had done that enough and I felt very protective towards my family. I stopped the fanclub, I sold the studio. I really wanted people to leave me alone. When fans came up to my house, I was very hostile. Later I understood that it's difficult to be warm and welcoming at one point and to close the door on the world the next time.
Horticulture helped me get both my feet on the ground. The kids and all the school things have made me very 'normal'. I don't take myself so seriously anymore, I don't expect people to take me seriously as well. I try to stay true to myself as much as I can. But I think that people will like my music again. I think it's the best I've ever done.

Do your children find it cool as well?
Sure.

And your husband?
He thinks it's great. When we got married, I quickly became a student and a gardener. Almost ten years later he finds out he's married to a rock chick.

Do you prefer the old or the new songs on your record?
My heart goes out to the new songs, really, but I also feel a great deal of affection with the old ones, especially because of the eighties tours. 'Kids in America' is a song which I really didn't want to sing anymore, it drove me crazy. It's like having to sing 'My way' all the time, so it was good to have a long pause. Now I can see that it were great songs, who were the soundtrack to many people's lives.
Producer Uwe Fahrenkrog-Petersen has reinvented them for the 21st century.
But it's still the new songs that make me feel good, especially the rock tracks. I enjoy being a 45 year old rock chick. Who still is a few years younger than Madonna, ha ha.

You also want to go on tour again.
This record asks for it. There are many live artists playing on this album. It has a high energy level and it's a lot of fun. I can't wait to take this music on to the stage. But it depends on the response. Will people embrace it or will they dislike it?

Another gold medal or do you prefer another top five hit?
The medal was one of the most beautiful moments of my life. I close my eyes often to think back to it. It was magical. If they ever make a movie about my life, it should end at the Chelsea Flower Show. What an amazing trip: from eighties popstar to wife, mother and gardener. Although the movie could also end differently: as born-again rock chick with a gold record! The possibilities are endless. 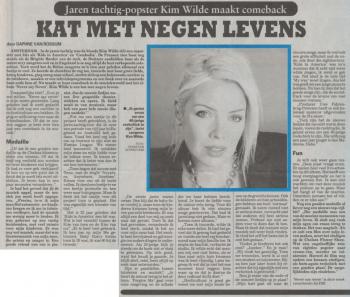