Passed/Failed: An education in the life of Kim Wilde, garden designer and singer

Kim Wilde, 45, had her first hit single in 1981 with "Kids in America". She is the daughter of Marty ("Bad Boy") Wilde. In 1999 she began presenting the television series Better Gardens, followed by Garden Invaders. Her books include Gardening With Children and, out in April, First-time Gardener.

Some kid was always hitting me round the head with a book when I went to a Greenwich school that I remember as quite rough. When I was seven my parents put my brother Ricki and me into a boarding school in Dulwich, South London. I am not sorry to say that the appalling place has been knocked down.

Then my father, who became a songwriter, found himself with five hit records written for other artistes, such as "Ice in the Sun" for Status Quo, and bought a beautiful house in the village of Tewin, near Welwyn Garden City, Hertfordshire. We moved from bad times to good. We went to the village school, Tewin Cowper C of E primary, where Mr Furlong was a wonderful headmaster, white-haired like Father Christmas.

Mr Webster was a wonderful music teacher who encouraged my musicality and cast me as Mary in the nativity play. My father is an atheist but he wrote a musical nativity in which Jesus was a spaceman who came to Earth. He did a few benefit concerts for the school: he, my mother, who had been a singer in the Vernon Girls, my brother and I got up and sang, Osmond-style! There was always quite a bit of fame for us as a family, which I didn't much care for.

When I was 11 I went to Presdales School, a girls' grammar in Ware. I have mixed feelings about it: I loved the sport, music, English and French, but I was terrible at science and maths. The kids there were OK; they loved the fact that my mother used to open up the beers and that my father had a really cool record collection. But they wanted different things. They seemed very focused on boys, going out, being secretaries, getting engaged and having kids. I was brought up to have grand expectations: I believed that fantastic things would happen. I felt I was searching for similar souls.
I stayed on until O-levels. I got about five - not maths - with an A in art. Then I did a foundation course at the St Albans College of Art and Design. I loved going to art college; I felt really emancipated and focused on what I did best. Instead of being average I was one of the top dogs; I got an A in my art A-level. One of the things I enjoyed most was painting outside: you could paint a scene a million times according to the way the light played on it. The principal knew who I was but my classmates didn't. I remember going into my tutor's office at the beginning of the year and saying, "I'd like to be Kim Smith - not the daughter of a famous father." (Smith is my father's real family name.) By the end of the year everyone knew, but by this time it didn't make any difference to them. I was considering going on to a degree and was offered two or three places at university but my brother had written some fantastic songs and I sang backing vocals on his first demos. I dyed my hair blond and the rest is history.

College got put on the back burner until 1997 when I was pregnant and wanted to have a nice garden for children to play in. I did a summer course in gardening and then a City & Guilds in plants and plant design at Capel Manor College in Enfield.

Last year we won a gold medal at the RHS Chelsea Flower Show. At Tewin Cowper we had competitions to make a miniature Garden of Eden and at the school my children go to they have the same competition. None of us have ever won, though. 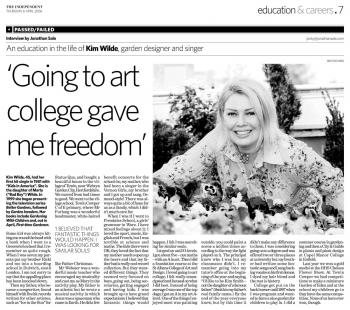