Kim Wilde, superstar from the eighties, is back with a new record: 'Never Say Never'. Metro talks with her about being famous, Michael Jackson and bodyguards.

What man didn't want to end up in a hotel room with Kim Wilde in the eighties? The British singer, known around the world from hits like 'Kids in America', 'Cambodia', 'You keep me hangin' on' and 'You came', was both a superstar and sex symbol.
A classic sex symbol in fact, different from an eighties star like Madonna, who made a living out of shocking people and breaking taboos (and still tries to do so), and very different from Sabrina and Samantha Fox, who had to earn a living with their sleazy looks. And before the angry e-mails come in: Kim had (and has) a great voice of course.
But okay: a hotel room at the eind of August 2006. Kim has come to rainy Amsterdam to promote her new record 'Never say Never'. A cd on which new songs and hits are being combined. The classic have been re-recorded (first single: 'You came') and the new songs sound fresh and dancable. On the way to the suite where the interview is about to be held, she suddenly appears. As beautiful as we remember her. 45 now, and mother of two children. "You want some coffee?" she asks, and we sit down.

Do your children know that you're famous from Canada to Indonesia?
No, the oldest is eight, and when you're eight you don't know what being famous is. But sometimes, when we're in London (Kim, her husband, actor Hal Fowler, and the children live in provincial Hertfordshire) I am chased sometimes. And then my son looks very strange at me. Like: what does it mean that all these people want something from my mother? My mother!

What was it like to be a superstar?
It's very strange. You don't really notice it all. You're in a rollercoaster and you can't get out. There's not a lot of time to think. It didn't make me very happy, by the way. It isolated you in a way. But I got on allright. I wasn't as big as Michael Jackson.

Oh yes, you toured with him. Did you have any contact with him?
We were on tour for months, and I didn't talk with him at all. Someone as famous as he is, is surrounded by bodyguards all the time. It's logical that you become a bit weird then. I also did a tour with David Bowie. Also a star, but much more accessible.

Did you have bodyguards yourself?
I did once for a very short time and it made me laugh. I made it a sport to try and shake him off.

In 2002 you suddenly had a hit with 'Anyplace, anywhere, anytime' (with Nena). What was it like?
I thought it was a lot of fun for Nena. It made me happy too of course, but it was good for her album that had just been released. I wasn't as involved in my musical career anymore, I preferred my family and my gardening career (Kim wrote two books about gardening and presented a gardening programme on the British TV for Channel 4). Nena's producer, who produces me now too, had to convince me to make another record. And I am grateful: I really love it again!

About your new record: I read that you let your producer pick which of your hts had to end up on it.
Yes, I needed someone who could look at it from a certain distance. I am very satisfied with the choices he made.

To finish: what is your favourite Kim Wilde song?
'You Came', definitely! It's not the first single for nothing.

Kim says she will stay in the Netherlands for a couple of days to visit some friends. She mentions the name of the town they live in, her Dutch sounds charming, but it's difficult to decipher. And then the coffee is finished. Alas. 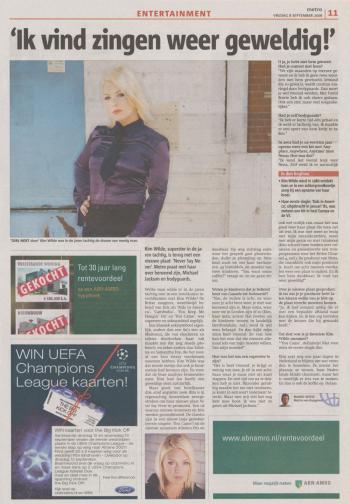 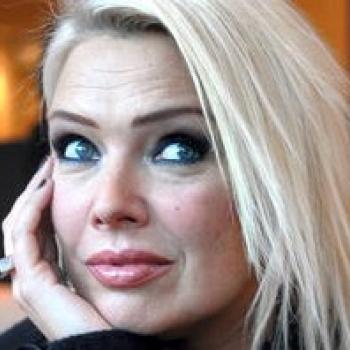