A generation of men becomes nostalgic: Kim Wilde, the star of the eighties, is back. Stern-editor Tobias Schmitz looks back.

She was 21, blonde and hellishly exciting. Which was mainly due to her unbelievable mouth, that never laughed and always shined mysteriously on those posters. "I want a mouth like that", said my mother, who explained that the shining was caused by "lipgloss", which surely wouldn't look good on me. Anyway: it was time to replace my Agnetha poster. With Kim Lipgloss Wilde. My mother suspected the worst. Wild. The wild one. What a name. And what music: "Kids in America" was a title, which I could translate despite my failing knowledge of English: 'Kinder in Amerika'! And I thought: beautiful that the wild Kim sings about us children. Then she sang "Cambodia". Surely an American child. When someone explained to me, that Cambodia means Kambodscha, I concluded that that was also a country, and probably the country of Kim Wilde. And so I learned about geography. Kambodscha-Kim suddenly hung a thousand times in my room and I began to look for girls in school who had Kim's mouth.

There were none. But maybe Carmen, who was also beautiful and most of all wore a great green anorak. Then Carmen told me that she didn't love me, but Stefan. Kim's never laughing lipgloss-mouth comforted me over the most difficult pains of the soul. It's obvious that Kim doesn't ever laugh, I thought, because who is unhappy and unloved like we were, doesn't laugh. Kim, I understand you!
When suddenly the fourth woman in my life - Madonna: Like a Virgin - appeared, Kim was replaced. She was away, for almost 20 years. Until one day I saw her in the British "Guardian", giving tips to amateur gardeners. Next to it was a little photograph, showing a woman with perversely beautiful, laughing mouth. Kim Wilde. A little more round than when she was 25, married, mother of two not-Cambodian children and a gardening expert. How beautiful, I thought, both of us were unhappy back then, now we both write articles.

I forgot her, until she sang the english version of "Irgendwie, irgendwo, irgendwann" with Nena in 2003, dressed in dominatrix-style, tight black leather. Until a press map came with the announcement: Kim Wilde, platinum blonde, no lipgloss, makes a new album. "Never say Never" - sag niemals nie! Oh you lovely one. She was serious!
"Kim", my innermost screamed. "Don't! Do! It! Stay, who you are! Don't come back! You can only lose!" Then the record came: eight routinely produced new songs and six old ones, one of which being Kids in America and Cambodia in new, but not better versions. kim, beautiful Kim, why?
She sits in a hotel in Berlin, gets her hair out of her face and says: "In the beginning I felt strange about the idea. But the more I thought about it, the more exciting it seemed to me. And now it feels good." She laughs. Why did she always looks so angry in the old days? "At the time I was young, and I thought, cool singers don't laugh." Now she is turning 46 and has to go to TV shows to get on with popstars half her age and think "You came" is a brand new song.
"My age is not important", she ays. "I feel better than back then". She looks me in the eyes. Her beautiful mouth is a half open secret. She knows exactly what she is doing, and she does it well. "My husband is totally enthralled", she laughs. "Ten years ago he married a gardener. Now he has a popstar!" 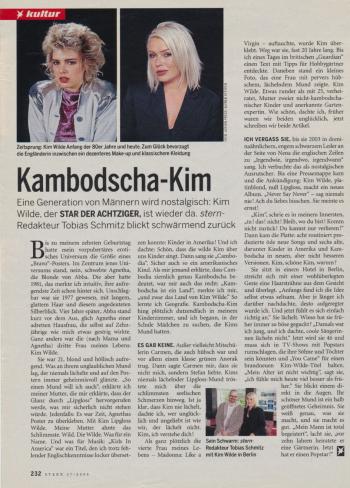