Kim Wilde (45) is back in the spotlights. The eighties icon releases a new album after a sabbatical of ten years and her single 'You came' storms the charts again. Topics had an exclusive interview.

My idol from the years that I was jumping around in the local disco myself, expects me within an hour in the suite of the American Grand Hotel. All night I dreamt about fragments of 'Kids in America', 'You came' and 'Cambodia'. Preceding the interview I read a lot of articles and that had its effect on me. Together with Madonna Kim Wilde reigned the clothing closets of the girls on my highschool. Every school agenda was filled with photographs of her. I painted my hair blonde and shopped until I dropped, searching for clothing that looked like Kim Wilde's. And now I get to talk to her for half an hour. The record company wants me to talk about her new cd of course, but I want to know what she did during the last few years, how's her life as mother of two children or whether she looks good at 45 and if she has to do a lot of work on that. Women's stuff.

In the lobby of the hotel I get to meet her personal manager Nick. We talk a little and then it's my turn. 'Please, come in' I hear. I walk in and there she sits: black pants, black blouse, great heels. Together with my smile my last bit of selfconfidence fades. I breathe in deep and introduce myself. "Hi, great shoes, would you like a drink? It's great to be in Holland, people are so down-to-earth and relaxed", she said. Kim sits down on the couch and looks at me. She has sweet eyes; suddenly I see the person Kim Wilde. My curiosity drives away the nerves. I only have half an hour and I want to know everything. I get out my notebook and pen. Here goes!

In the middle of the eighties Kim decided to stop making music. Although she was the best selling solo female artist of England, she gave her career a different route.

Kim: "I was working in the music industry for many years at the time. My first album was released in 1980, and from that moment on it was a rollercoaster of successes but also incredibly hard work. It was fun, but at some point I really longed for a rest. The challange of scoring hits was fading and the media didn't stop comparing me with new artists like Kylie Minogue and Madonna. Not that I had much to complain about, because I believe I sold some twelve million albums worldwide. But no matter how many publicity tours we did, it didn't help and I had the feeling I reached the top of my abilities musically. I longed to stay in one place for more than a few weeks. Fifteen years of travelling around, recording albums ad doing concerts is straining. My dream became to sleep in the same bed each night for a while. When I read the script of the musical 'Tommy', I knew I wanted to do that and so I auditioned for a part. I think I'd never been more afraid than I was then. I knew I could sing, but I'd never acted. And at the time I was pretty unsure of myself. But I sang my heart out and got the part. During rehearsals I got to know Hal Fowler and it was love at first sight. Six months later we were married and I was pregnant with our son Harry Tristan, who is now eight."

The family moved from London to a village on the countryside and Kim stopped working altogether. Two years later she had her second child, daughter Rose, who is now six.

Kim: "Motherhood gave me the courage to stop singing and to focus on what what the most important thing for me: my family. In the beginning it was great to leave things behind. I got fat and was a fulltime mum. But I couldn't sit still. I followed colleges at the prestigious Capel Manor College during my pregnancy to study horticulture. I wanted to teach my children what the outside life really was like. That they would have a great garden to roam in and that lettuce doesn't grow in plastic bags in the supermarket. At the time, gardening became 'hot' in England. When the media got wind of the fact that I was into gardening and, if I may be so immodest, had enormously green fingers, someone from the BBC visited to ask if I'd like to present a gardening programme. And so I started to work again after all. In the beginning it was pretty difficult to combine that with my family. Like spinning plates in the circus. But I succeeded in letting all the plates turn in the end."

For her work as gardener she was awarded several times, she worked as a presenter, columnist and wrote two books as well. One of them was translated in Dutch as 'Tuinieren met kinderen' ('Gardening with children'). All the passion she felt for gardening she put into gardening now. But the music and the stage life still had their attraction. Kim: "My husband is an actor and musician and he comes from a musical family, like I do. But during the first five years I didn't sing much more than children's songs. Then I was asked to do the Here & Now Tour, a concert series themed around the Eighties. Together with artists like Paul Young, Human League and other greats from that time. I thought it was great and contrary to that time I had a great time on the stage. Getting older has its advantages. Everything I was worried about then, like my looks, just falls away. It didn't interest me much that I wasn't a size 36 anymore. I embarrassed people in my presence wearing a leather suit while I had size 48. I didn't care about it myself. It's not great to see a horrible photograph of yourself in the newspaper, but it's not so hard to make a bad picture of someone. In the old days it would have really upset me, but now... I raise my shoulders and think 'F^%&-off'."

In 2000 she met the German singer Nena, wellknown from the song '99 Luftballons', at a concert. Because they were famous in more or less the same era, Nena asked her to do a duet on her new album. Kim sang the song in half an hour and didn't think about it after that. Her surprise was great when the song 'Anyplace, Anywhere, Anytime' became a monsterhit in Europe. It meant recording a video and performing live. Kim: "Because of that unexpected success I got the itch to get on stage again. I felt competitive again. I wanted to score with my own new album. And no, there are no slow or boring songs on it like some people might expect from a middle-aged lady, haha! I have worked really hard for an album with fantastic remakes of old songs, but I have also written some new songs with my brother Ricky. I have lost my extra weight almost completely. It's not the issue it used to be. I don't need to comply with a beauty ideal, but I do want to feel good."

The promotion tour is in full swing. Kim and her entourage travel through Europe for interview, television performances and other pr-activities. It means that she sees less of her family. Husband Hal works from home and takes care of the kids, and Kim's parents play a bigger part in raising the children as well.

Kim: "I think every mother who reads this knows how great it is to have a good night's sleep without being woken up by screaming kids. But of course I do miss them when I'm away for five days or so. Hal does like being married to a rock chick all of a sudden. What man wouldn't want to have a new hip young woman after ten years of marriage? I was the most proud of my daughter of six, who is a total fan of the animation film 'Jem and the Holograms', when she said that I was just like Jem. It's great: what daughter who sees me at my worst in the morning compares me to her biggest idol! It's great to get so much love and support from my family. It gives me the strength to go for it. And in all honesty, it scares me a little as well. But through the years I learned that when you take risks and do the things you're slightly scared of, life rewards you with the most fantastic things. I stopped singing and met my husband, I went back to school and discovered my second passion, gardening, I became a mother and it turned out to be the most fantastic project ever, and now I'm on the eve of my second life as a popstar. It's exciting and fun at the same time." 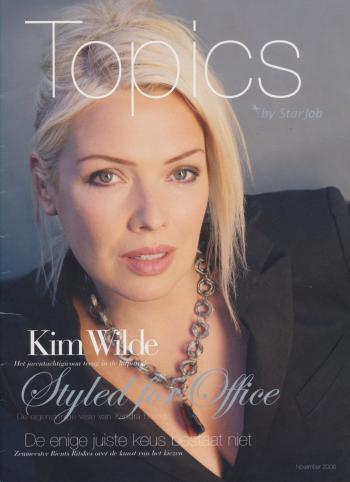 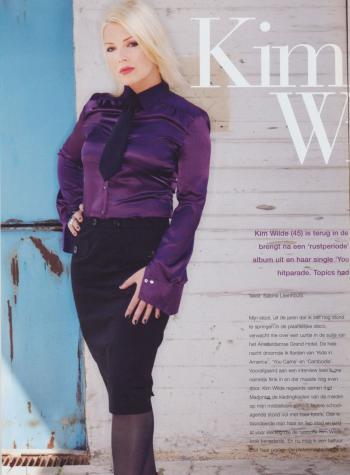 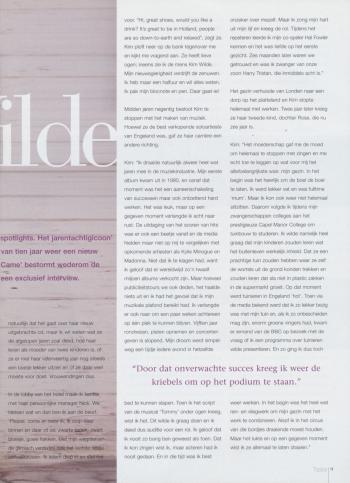 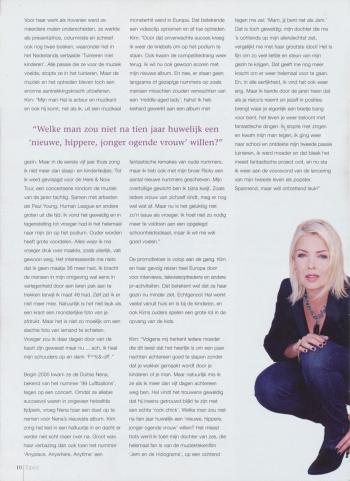