Kim Wilde (45) follows her friend Nena; she is working on a comeback now too. With the new cd 'Never say never' and maybe even a new tour...

The French called you the 'Brigitte Bardot of rock'. What do you make of that?
I think it's fantastic! I mean, come on, the French compare me with a woman who doesn't only look great but who's also an icon. I have been compared to famous people more: Marilyn Monroe, Debbie Harry, Madonna... I used to think it was stupid, but now I am very happy when they want to name me in one breath with these people!

Your new cd 'Never say never' has almost the same title as the James Bond movie. Are you a fan of 007?
No, not at all! 'Never say never' is my philosophy of life. I never thought I would get married and have children. I never thought I would have a career as a writer of books about gardening and I would certainly never have thought I would return to my old job! When I sang in Tommy, the musical, I was so tired of it at one point, that I thought I would never sing again! I got bored of the business and of me and I thought the public was tired of me too. I obviously wasn't right because then my duet with Nena hadn't been the success that it was.

On your new record there's a few old songs too, like 'Cambodia' and 'Kids in America'. Why go back to old hits, when you can make new ones?
Simple: when Nena did her comeback she had only re-recorded old hits, and it worked. I took her record as a blueprint for mine. I just had one demand: the old songs needed to have a new, fresh sound. That's why we asked someone like Paul Oakenfold to remix 'Cambodia'. If Paul is good enough for Madonna, he's good enough for me.

It's 25 years ago this year that 'Kids in America' came out. 25 years!
Oh man! Believe me when I say that it feels like 25 years. I was young, arrogant. It was the eighties and no-one cared about anything, except their hairdo. Lovely! But at some point I realised that other musicians became more popular than me. The last thing I wanted, was to become a sad popstar who doesn't realise she was out of it. So I quit before I was thrown out. But, my God, what does an unemployed popstar do? Fortunately I found a job as a writer, but now I am talking about my musical career, I realise how much I missed it! 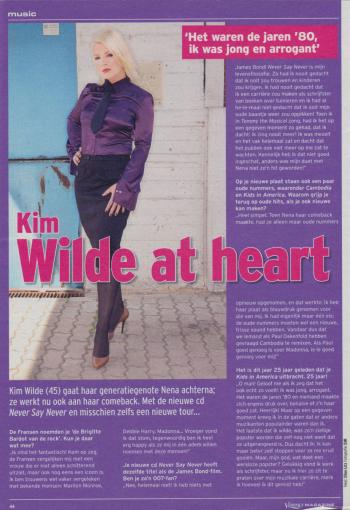