Kim Wilde: "Gardening was my therapy"

For ten years, the pop star from the eighties set aside her singing career. For a decade she profited from the time that came free to marry and to cultivate her hobby: horticulture. She opened her secret garden to BonWeek.

France is a country close to your heart. Why?
I love France, your language is so poetic. And also... I like the fact that the French like me (laughs). There's always been a special link between us, I don't know why.

Have you never considered recording with French artists?
I have! For years I've had this project in my head. Especially with Françoise Hardy, because I love the song 'Premiere rencontre'. I learned the lyric by heart, because I am a fan. She sings about a meeting that changes your life. It's like how I met my husband.

May we know a little more?
With Hal, we got to know one another and six months later we got married. That's ten years ago...

Did you dream about marriage?
I had a good image of marriage thanks to my parents. In my case, I did love other men before Hal. But with him, it was obvious. Since then, I am named Fowler, which is an anagram for 'flower'. And flowers are my passion (laughs).

Did horticulture really change your life?
Gardening was my therapy. It is my passion to watch the flowers grow. It made me feel good that the universe didn't revolve around my appearance anymore. But most of all it was becoming a mother and having a husband that changed my existance: it's truly a pure state to be in.

Do Rose (8 years) and Harry (6 years) understand that their mother is a pop star?
Yes, I think they're beginning to understand. But I've always tried to protect them.

When you're travelling, don't you miss the kids a lot?
I only spent eleven days at home in six weeks because of the promotion for the album. It's good to have some 'me' time now. And I think it's good for them too if mother isn't always there, it makes them more independent. And my mother and my husband also take care of them. I'm not worried.

Why did you turn down a worldwide career?
I was number one all over the world with 'You keep me hangin' on', but I love my home and my country too much to always be travelling around. It's funny, people always think I have this independent life, but I lived with my parents for a long time. Even when the success was enormous! 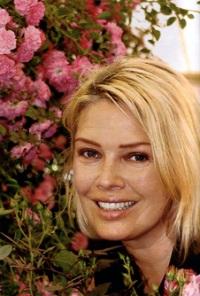