Kim Wilde: "I never wanted to be a popstar"

Her hit "You came" storms the charts again after 18 years. A comeback, that no-one counted on. Herself least of all.

With "Kids in America" Kim Wilde (45) became a world star in the eighties. One of the biggest coincidences in the pop history...

Is it right, that you never wanted to become a popstar?
Yes. I always dreamed of a normal job.

Like what?
No idea. Simply something normal. Somehow my father convinced me to do backing vocals on my brother Ricky's songs. I never thought of a solo career. Even until today, no-one believes it.

Who had the idea for tha album 'Never say never'?
There was no masterplan. In fact, I never wanted to record another album again. But then I met Nena at a party. She convinced me, to sing on her album. And our duet "Anyplace, anywhere, anytime" became a giant hit. Her "best of" album gave her a good comeback. And then I had a lust to try it again myself.

What can we expect from your album?
The old hits in a modern sound, but also brand new songs, which I wrote with several songwriters, with my brother and with my producer Uwe Fahrenkrog-Petersen, who also produced Nena's album.

[!}Would you like to perform live again, too?[!]
Yes, I definitely want to get back on stage. I did a couple of eighties tours in recent years, performed some old songs. Early 2007 I want to go on tour with a real live band. The planning has just started, but it's already concrete. It will definitely happen.

A lot of your old fans never thought it would happen...
That's right. In 1995 I decided to quit the pop business. Then Pete Townsend, guitarist from The Who, sent me the script for the musical 'Tommy'. I went on audition and got the role of Mrs. Walker and a contract for a year.

It was destiny, or so it became clear.
That's right. I met my colleague Hal Fowler and fell in love, got married, and became pregnant. Now we have two children and just celebrated our tenth wedding anniversary.

What I find fascinating, is that you have made so much from your love of gardening...
Well, at first I was just happy to have found the man I love, something I craved my whole life. I always loved working in the garden. It relaxes me, and it gives me a chance to shut off the crazy world of pop business.

That sounds very modest. In England you have become an icon in the field, wrote books, presented your own TV show. You have become a Mrs. Green Thumbs...
(laughs) Yes, I do have them. But it's also about design. Before my first hit 'Kids in America' I went to Art College, and I wanted to study design. Later I went to courses. I was fascinated by nature. It gives so much back to people. There's a big philosophy behind it.

You have written a book called 'Gardening with kids'. Isn't working in the garden too slow and boring for children?
Not at all. I wrote the book already five years ago. It will be released in a German translation soon. I was of course inspired by my first experiences with my own children. They have a lot of fun while working in our garden. They love planting things and seeing them grow. That was also why we moved from London to the countryside. I wanted them to have their own wonderland. I can recommend it to any parent! 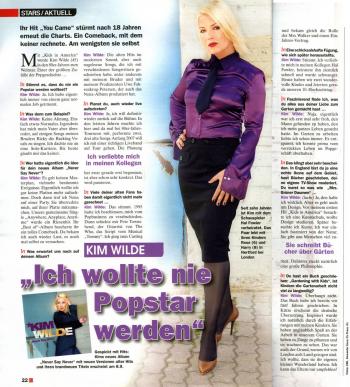