Kim Wilde: "My church is the garden behind the house"

August 2, 2006, Cologne. Kim Wilde, now 45 years old, is a bit nervous at the beginning of the interview. She isn't used to so many personal questions. Lately the pop queen of the eighties has been taking care of flowers as England's gardening expert number one.

Mrs. Wilde, according to a study the personality of humans is not - as generally accepted - with 30 years completely developed, but only at 40. Only then develop a quality named beauty, men as well as women become more balanced and at rest with themselves.
I would agree with that of course. Although it is always difficult to compare people and their natural courses. Who are the 40 year olds? Some of them are already married for 20 years, others still live as single youngsters and have several partners a year.

How was your 40th birthday?
It was a day of joy, definitely. That was most of all because I was very sure that I had successfully taken on a new job in my life. I could look in the mirror and be sure that I had a happy family with two children and a great partner. That feeling I didn't have when I was 30.

Because?
I was not at peace and worried. I was always sure that I wanted to have a steady relationship and children. In the music business I met so many women with similar needs, who worried about fulfilling their dreams much too late. I didn't want to become the next candidate on the list of popsingers who couldn't make the change to a normal life and stay in the business, even though it didn't fulfill anymore, but just get bored in it.

What was your recipe of success?
I needed a lot of patience, because the liberating moment of marriage came at 36, six months after I met my husband for the first time.

How exactly did this liberation express itself?
First of all I had a really great feeling, to have finally found a soulmate. It was as if I had flipped a switch, as if my inner self became at rest from one day to the next. And suddenly I found the answer to the question, what alternative I had next to the life in music: I started doing gardening. For years the people made snide comments about my hair or my weight - and suddenly everything was alright, the flowers were the only thing of importance.

In England people don't know you as much as a popstar from the eighties, but as a gardening expert with your own TV show and successful books.
Yes, and I enjoy it. In the English newspaper The Guardian, I had a gardening column, in which I answered questions from readers. No hobbygardener thought about my old career when they sent their questions - it was a new start. You know, some people find new hope in spirituality or religion as they get older, I find it in flowers. My church is the garden behind the house.

What characteristic you had in the past do you lack now?
Greed. I was sure at the time, that something exciting was always waiting around the corner. And so it staying until well into my thirties.

And what happened then?
To be honest, quite simple: I met my husband. I found out what I did right and wrong. I remodelled my life and became happy.

Can you help those who are still looking for their dream partner: what does he have what others didn't?
Oh dear, I have often asked myself that question. I met him first ten years ago when I did the "Tommy" musical in London. I often think that I may have met potential soulmates earlier on, and one of us simply weren't paying attention. That was different this time, we were both ready for it. Where I usually discharge of such cliches - here's another one: I have always believed that I would meet the love of my life. The question is just: Would I have seen him when I didn't believe that?

I think that the possibility fades, when one is pessimistic about the thing.
Right. One would also just see the possible problems with every new meeting. But it's wrong to be uncourageous. Every person has to be prepared in their life, to burn their fingers at first. It went that way for me too.

You spoke about the list of ex-popstars, who couldn't make the change to normal life: you could now give seminars about life after fame, couldn't you?
Oh now, I don't want to give advice to others. I would only do that if someone would want to know something from me specially. But to just say something, is not my style, because people's lives are too different from one another. Where my life is concerned, I can say one certain wisdom.

Like what?
Always keep a place in your life for something new. I compare my life a bit like a fridge. Often it is totally full, then I have to take a few things out, then I have more space for great, fresh stuff. There are people who never throw anything away, but I don't want to keep old, spoiled things. They stink and take up space.

Your father, who was also a famous singer, has a healthy outlook on success. He told you to take fame as a gift, which one should always be able to put away in a box somewhere. It sound simple, but was it really?
For me it was, because my father kept to his own rule. Out there he was a star, in the house there was no sign of his success. He showed me how to do it, so for me it was simple to close the chapter popstar for the first time ten years ago.

You have pulled back decisively back then. Why?
I got bored with the business. I didn't learn anything anymore and I had to get out. But I admit: I was worried what an unemployed popstar does. But I noticed really fast, that being a mother and housewife for a couple of years and to discover a new subject like gardening was absolutely fulfilling for me.

What did gardening give you exactly?
For me a garden is the best way to get contact with our planet I love on again. For years I lived on earth without really having any consideration for her. Planes, hotels, stages - on these places one doesn't feel really grounded. I found that my two children and my house needed a garden. When I was young I had the great fortune to play in a garden. Flowers, trees and fileds - those are my memories, when I think back to my childhood. And the fascination has stayed. I look out of windows during my travels and try to identify the trees. When I can't think of their names, I go crazy! (laughs)

Do you still do a lot with music?
I have just started. I had closed the subject so much, that it took me a while to get to the right position again. Now I have started to fill my iPod. Often when I hear new songs on the radio, my heart opens. When I left the music business in 1996, the only thing there was the dreadful Spice Girls - music for nervous breakdowns. Now I turn on the radio and there are cool young bands or great musicians like Rufus Wainwright.

Which brings me to the question, why you are doing a music comeback now?
Because I like to be in this club again - making great music and looking good. (laughs). The real starter was the eighties revival tour with bands like ABC, Heaven 17 and Paul Young. That was a bit of an escape: mom has a vacation and sings a little (laughs). I rediscovered my past and re-valued it. It's another privilege of getting older: as the years go by, one starts to appreciate what one has accomplished. For a while I thought I had to close off that time. But I have re-opened the box of fame once more.

Was it an emotional or rational decision?
My head said no, but my gut said yes. I could turn off the thoughts in my head.My children are now six and eight - I can stay away a bit longer and go on an adventurous trip.

Was it getting boring to stay in the house?
Believe me: it was nothing like boring. I had to do things, to become a gardening expert. I read a lot, I studied agriculture and horticulture, studies for my exams - and passed. I started designing, did workshops, led teams making big gardens. It was a completely new world for me.

What talents does one need to be a really good gardener?
To be straightforward about it, you have to be excited when yo usee a plant. Without an appreciation for the beauty of flowers it makes no sense to start studying about it. It would be like drumming without any feeling for rhythm. It's also important to have a feeling for languages because determining plant names in Latin is part of it all.

You had to learn Latin from scratch?
Yes, but it was easy, because I have a talent for languages. It is strange that Latin is perceived as such a bulky, difficult and dead language. Ask a doctor, an ornitologist or a gardener: for these people Latin is the most alive of all languages. It's very concrete, it describe everything accurately. I would recommend every parent to let their children learn Latin. I know of no more beautiful language. My romantic point of view probably also stems from the fact that I have a Latin inscription in my wedding ring: Humanum amarest - it is human to love.

In general: does a human disturb a good garden?
Oh no. A garden, the way I see it, is a place which only functions when people dare to move in it freely. I like strong, resistant plants, that can take it when people tread on them. Our dog is relentless when she is in the garden, also biting in rare, valuable flowers. But the plant can take it.

Last question: when yo ucan go home again now, what do you look at first: the flowers in the garden, husband or children?
The dog. She is, next to me, the only family member who breaks out regularly.

Kim Wilde was born on November 18, 1960 as Kimberly Smith in Western London. Her father Marty Wilde was a famous Rock 'n' Roll singer, together with her brother Ricki Kim started her own pop career at a very young age. She broke through in 1981 with the single "Kids in America", until the end of the eighties she was one of the most successful english popstars. After marrying singer Hal Fowler in 1996 she got involved in gardening. She studied horticulture, presented a gardening show on English TV and wrote books and articles. With her two children and her husband she lives in the provence of Hertfordshire.

Kim Wilde's musical comeback is a mix of old favourites and new songs. There is a new version of the hits "You Keep Me Hangin' On" with Nena as guest singer; also other Kim Wilde classics like "You Came" and "Cambodia" are included - the latter in a dance version by star DJ Paul Oakenfold. The record was produced by Uwe Fahrenkrog-Petersen, who Kim met while working with Nena. 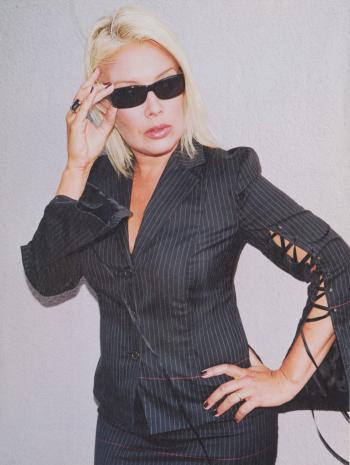 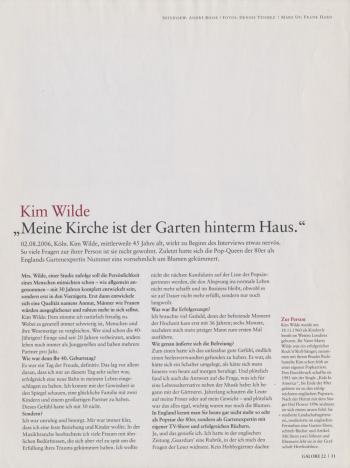 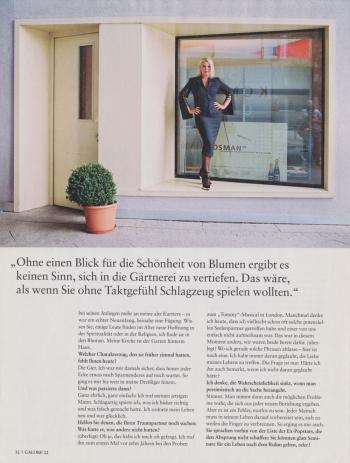 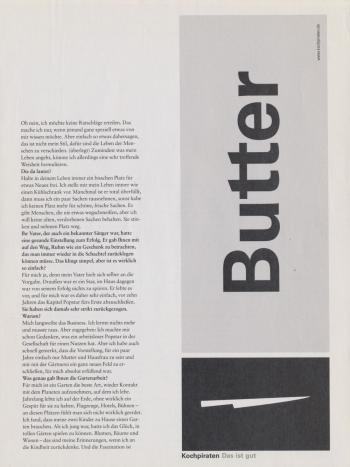 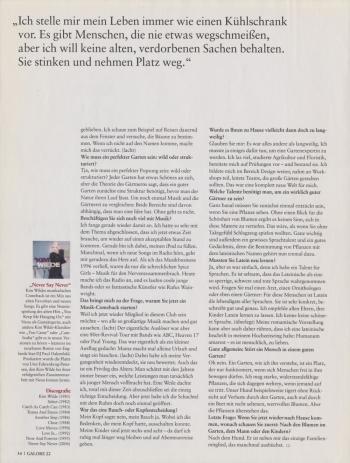