Kim Wilde was a guest in our studio. In the NDR2 interview the 45 year old explains why she is back in the music business, which songs she thinks are important, if one can dance on one's own music at all and who was her hero in the eighties. Here the full interview!

A few years ago you didn't want to have to do anything with music anymore, and chose for gardening instead. Why did you come back now?
It was a combination of the Eighties Revival tours, that were a lot of fun, being on stage and singing again, and of course the project with Nena, this "Anyplace, Anywhere, Anytime" story. It was a lot of fun to collaborate with her. At the time I thought I might, I just might try to try it again myself.

Your new album is called "Never say Never", just like the comeback of James Bond actor Sean Connery. Is that just a coincidence?
Yes, it is. The name of my album is "Never say Never" because I never thought I would make a comeback album. When I got out of the music business ten years ago, to get married and have children, and studied landscape gardening, I never thought I would make any comeback at all. This album is just as much a surprise for me as it is for others.

Isn't it tremendously exerting to be a popstar again?
I thought I would be more stressed out than I am now. I think it is even more difficult to have two kids growing up. To make music again is like a picknick compared to the years I spent with my children, who drove me crazy at times. I love travelling, I love my album, and it's great fun to be back, and it's also a bit crazy. My children miss me, I miss them too, they are not as bad as I make them look sometimes (laughs). At the moment my mother is looking after them, and my husband. It's good for them to find their own way this young.

What do your children think of your songs?
Well, at home my music isn't continuously playing of course. But there is a lot of music in the house, and most of all in the car. During the past few months I tested my songs on them - Rose prefers the beautiful, poppy melodies, Harry like the harder, rock tracks. He is a fan of Metallica, she likes Kylie Minogue. I love both.

And which Kim Wilde track do you like most?
Among the new tracks there are a few I really love. "You came" was always a favourite of mine. I was really pleased when EMI chose that song to be the first single. And it's received very well, which is surprising, when you think that it was a hit in 1988, and in 2006 again. That is a big surprise.

You recorded the new songs partly in the London RAK Studios, where you also recorded your first songs. Was that important or is one studio not any different from the other?
Not really, especially since it was the studio where my whole career started. It was there where my boss, Micky Most, saw me and thought I would look as a pop star. To be there again now, was an unbelievable experience, most of all, because Micky Most has passed away in the mean time. He was somehow still connected to that studio, without actually being there. It was a very emotional trip back in time. And to sing those old songs again, for instance "Kids in America", this time with Charlotte Hatherley, was also a wonderful experience, because it felt like I handed the song over to a new generation. It was a good feeling.

How did you get to know Charlotte Hatherley?
I met her, after she released her album "Grey will fade". And it contains a song, called "Kim Wilde". I thought: "Wow, what would that be about?". And I listened to it, and it sounded outstanding. Just like the rest of the album. So I became a big fan of Charlotte Hatherley, and arranged to meet with her. We drank tea together in London and had a great time. I asked if she would like to work with me on the new album, and when she came in the studio, she thought she would only play guitar on "Kids in America". But I asked her to sing the song as well. I couldn't very well do it myself anymore! And I think it's great she did it.

And what is Charlotte Hatherley's song "Kim Wilde" about?
Oh, it's not about me at all. She'd simply included a few titles of my songs in the lyric, that went through her head. It's about a certain era. And she told me she wanted to write a song as good as "Kids in America", and you can hear it. Her whole album sounds great.

You have also worked with your brother Ricky, with Nena and of course with your producer Uwe Fahrenkrog-Petersen. Was it a cooperation between friends or hard work?
I already knew Nena from the early eighties, we did tv programmes together. She and Uwe visited England for many years. And then I met Nena again in Berlin, and she asked me to work with her on "Anyplace, Anywhere, Anytime". I did it, flew back and devoted myself to my family and gardening without ever considering a comeback. And then came calls from Holland and everywhere, that we had another hit. That's when I started to think that it would be great to record something new again. It might be great to be back. You can never know, until you actually do get back. Sometimes it is a little bit frightening. And here I am again! (laughs)

What is the main difference between the original versions and the new versions of your songs?
I think the old songs sound fresh and modern, and fit perfectly with the new ones. There is not schism between the past and the now, they simply fuse together. And I told Uwe, he should pick the ones with the most energy - as long as "You came" would be included, because that is the one most dear to me.

Do you dance on your own songs?
Yes! Most of all when I play them live, of course. And then especially "Kids in America", when I dance up and down, which has a certain kind of comedy to it. On the new album there are a few songs that you can dance to very well. "I fly" is an excellent headbanging track.

Don't you expect a lot from your old fans, who'd gotten used to dancing to the original versions of your songs for 20 years now?
If they feel that way, they shouldn't buy my new album, that's for sure. But I think, if I love hearing modern pop music, it will be the same for other people of my age. It's not a question of age, though. I really like the album by Lily Allen, for instance. It's very clever, with lots of good melodies and lyrics. There are a lot of popstars that leave you cold, but something in her is just beaming. I have ears, that want to hear something fresh, and I believe lots of my old fans want this too. And I believe they look forward to what I've made. But we shall see...

Nena had a great comeback, you are just starting - whose comeback are you waiting for still?
I would love it when Adam Ant would make music again. I was a great fan of him in the eighties. And I'd love to see him again. Just like Billy Idol. I like him.

In the eighties you were supporting Michael Jackson and David Bowie. What kind of people are they?
Very different from one another, I can tell you. Both of them very talented. Michael Jackson was at the highlight of his fame at the time, and it was a breathtaking tour. For three months we travelled through Europe. We performed live at Wembley for seven evenings, which was unbelievable. I have also seen that he was strange, and had bizarre rituals; we have had a bit of fun about that. But most of all I have seen him from afar and I was very impressed. It took some courage to play as the support act of Michael Jackson.
I remember a very difficult evening in Italy, when they threw things at me. And it was at the very start of the tour! I told my management: "It's a crazy idea, to do this tour. No-one is interested in Kim Wilde. I'm going home!". But in other parts of Europe it went a lot better than that. I got standing ovations, so that the American entourage started wondering, "Who is this Kim Wilde?". But I knew at the time, that my fans didn't turn on me, when I needed them most.
With David Bowie it was a different story. He is a Londoner, down to earth and enormously talented. It was great to hear him, during his "Greatest Hits"-tour. I fell madly in love with him. He wasn't interested in me in the slightest, because he was just falling in his love with his later wife, Iman. He broke my heart every night again, when I watched him and realised I would never be Mrs. Bowie. But I have lovely memories of that tour. It was wonderful.

Who would you like to have as support act on your forthcoming tour?
I would love to tour with Charlotte Hatherley, we would have a lot of fun together. I like her music and her energy. Yes, I would love to work more with her.

Kim, you never have any scandals. How do you do it?
I tried having a scandalous affair with Bowie, but I couldn't! (laughs) But a lot was written about me in the UK. Although, not so much after all. But when you get on stage at 20 and marry at 36, there's a lot happening in the mean time. To a friend of mine I said recently: 'The best thing to do to get a comeback in the UK, would be to get divorced, get into rehab or something. That would be a good story'. But unfortunately, that won't happen!" (laughs) 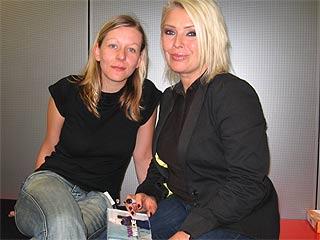