During her early 20s, Kim Wilde was one of the biggest names in pop, but these days she's happier in her garden than on stage.

'I can never remember a time when I didn't want to be a pop singer. My dad, Marty, was a singer and so too was my mum. So I was probably born with the performance gene!
I was first aware of how much I wanted to be a singer when I saw my dad performing on stage. I was very young - perhaps just three years old - and it was my eureka moment. I remember thinking, 'I want to do that.'
I didn't seriously consider anything else, although I did love writing as a child, and still do. But even writing has formed part of my musical career. Songwriting is one of the things that kept me sane during my years in pop.
My first public performance was in the school nativity play, aged eight. I was Mary and I could still tell you every single word I learned - 37 years on!
My parents obviously had a big influence on me, but I also had a music teacher - the wildly attractive Mr Websiter - who made an impression, too. He was a good man, full of enthusiasm for his subject and the ability to make us excited about music.
The kind of music I liked when I was growing up, probably influenced my career and played a part in ensuring that it lasted. Our house was always full of music and I was drawn to songs with emotion. I remember listening to cilla Black singing, Anyone who had a heart, when I was about four years old, and realising it was making me shiver all over.
At the beginning of my career, I wanted to be a backing singer. I saw it as my dream job because I would get to sing different styles of music, tour with my heroes, be under no pressure to be the perfect girl at the front of the stage, and yet get well paid. But record producer Mickie Most wanted me to be a solo artist and work with one of his producers. My brother, Rikci, wasn't having it - if anybody was going to do anything with me as a solo artist, he reckoned it should be my family! So Ricki and my dad went away and wrote 'Kids in America' and it reached number two in the UK charts.

My family have been with me all the way since, and have kept both my sanity and finances in order. I am particularly grateful to my mum for the latter! I believe you're either a business person or a creative person, and I am creatively minded with no business acumen whatsoever! Thankfully, Mum has a very sharp, business brain.
I have two children - Harry, eight, and Rose, six - ad the most important thing I could say to them, whatever they do in life, is to make sure they get good business advice. Things can go horribly wrong if you don't.
I had an enjoyable enough pop career to recommend the music industry to my children. And judging by the guitar Harry plays in his bedroom, and those piano tunes which Rose has the ability to make up willy-nilly, I am fully expecting them to have that eureka, musical moment, in the way I did!

Not everything about my pop career was great. There came a point where it was no longer fulfilling. The industry doesn't give much back. It gives you money and fame but it doesn't give you much for your heart and soul. It's fulfilling when yo uare in your 20s, but when you hit 30 you start hinking, 'What else is there? I need more nourishment.'
In the end, I was relieved to get out of the pop business. It had become boring. I still had a record contract, going into 1996, but I knew in my bones that my pop career was no longer going anywhere.
I appeared in the musical Tommy that year - a kind of halfway house between being in the music business and not being in the music business - and it was there that I met my husband, Hal.
Our first date was dinner at The Ivy, in London's West End, and, by the end of it, we knew we wanted to spend the rest of our lives together. I'd wasted a lot of time with inappropriate people, guys who could be painful to be around, but Hal was different. He was - and is - brilliant with other people. It's one of the reasons I love him so much. He loves other people who, in turn, love him and out of all the cast in Tommy, he was the person to whom everyone else was drawn. I found that really appealing. Finding someone with whom yo uwant to spend the rest of your life is incredibly liberating and I'm now in a very happy place.

I never imagined I would make a career out of gardening but I got bitten by the gardening bug in the same way I had by the singing bug! It's probably something you can trace back to my childhood. We moved to a gorgeous thatched cottage in Hertfordshire when I was eight years old, and to suddenly be in an environment of open spaces and beautiful flowers, and attend a school which put a huge emphasis on nature and encouraged us to make our own, miniature gardens, just blew me away.
I certainly didn't think of horticulture when I was looking for that post-pop career, and, even now, my interest in it is focused mainly on making our own garden in Hertfordshier as good as it can be. But it's led to TV work, I've gone int oprint on the subject and it gives me enormous pleasure - just don't look too closely at one or two of my early TV appearances, as a so-called gardening "expert"! I remember misidentifying some plants on ITV's 'This morning' and thinking, "This is beyond me". Thankfully, I had a few buddies in horticulture who helped me through and I went back to evening school to do a two-year course and really learn my stuff. I only missed one class - when I was doing an Eighties' concert at Wembley!

That's the other thing that's happened, in the last few years... I've gone back to gigging!
When I was asked, a few years ago, if I would be interested ni taking part in an Eighties' tour, I was a bit sceptical. But the money was good, I could shed some baby pounds and the thought of working with artistes such as Altered Images, the Human League and ABC was very tempting. I fully expected to take the money and run, but it's become self-perpetuating and the shows continue to go down well. So, every now and then I pack my case with my leather trousers - after making sure I can still get them on, of course! - and go off and be Kim Wilde, before coming home and doing the school run.
And that's a great leveller. One minute, you're on stage in front of 5000 people who are going mad, the next you're dealing with a six-year-old girl who is having a tantrum because she doesn't want you to brush her hair!

Having the confidence to perform as a singer

'My interest in musci started from an honest place. It was never about nice dresses and always about the music. My parents brought me up to have confidence in my abilities as a performer and I never had any doubt that I could make it as a singer. The idea of failure simply never occurred to me, even though I knew I couldn't sing like Aretha Franklin or write songs like Joni Mitchell.
I knew the voice I had was a good one. It wasn't a great one but I saw its strengths, not its weaknesses, and that had a lot to do with the confidence that had been instilled in me.'

Kim Wilde at a glance

Born: 18th November, 1960, in London
Status: Married to actor, Hal Fowler
Children: Harry, eight, and Rose, six.
Career: Her debut sigle, 'Kids in America', reached number tw oin the charts in March 1981. Subsequent hits included 'You keep me hangin' on', which charted at number two in the UK and number one in America. As a horticulturalist, she has appeared on TV shows, such as 'The Joy of Gardening' and 'Better Gardening'.

Kim Wilde's book, 'First-time Gardener' (Collins, 17.99) is now available. Its aim is to provide even the most hesitant beginner with the inspiration and confidence they need to make the most of their garden. As Kim says, 'I hope it sparks people's interest in gardening and it - gardening - becomes as much of a passion for them as it is for me.' 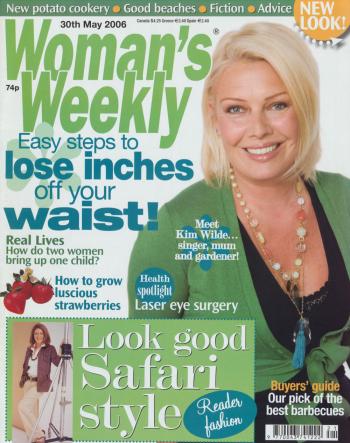 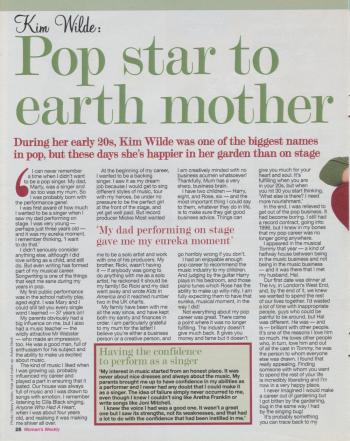 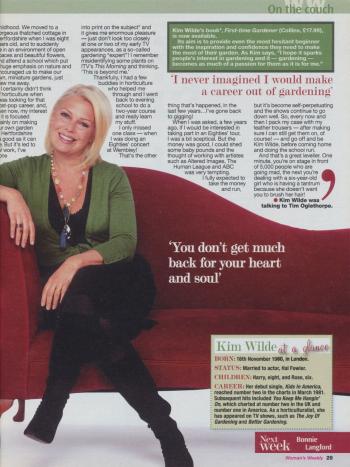