EMI Music, the firm Kim Wilde had a lot of success with in the eighties, releases a new studio album by the singer in September. Producer is Uwe Fahrenkrog-Petersen.

The cd "Never say never" contains next to eight new songs also six re-recordings of older tracks, such as the song "You came", released as the first single by EMI on August 18. On the album are also duets with guitarist Charlotte Hatherley from Ash and with Nena. The German singer invited Kim Wilde four years ago to sing on a new version of "Irgendwo, irgendwie, irgendwann". Under the title "Anywhere, Anyplace, Anytime" it reached number 3 in the Top 100 singles.

During the recordings of the Nena-album Kim Wilde, who has sold over 30 million albums and singles worldwide through the years, got to know producer Uwe Fahrenkrog-Petersen. With her tenth studio album wants to repeat the success of her first three albums like "Kim Wilde" and "Select", released by the EMI-label RAK at the time. 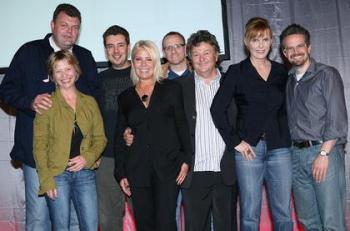