Kim Wilde, the exciting dream of young boys in the 1980's, has a comeback with the cd "Never say never". "Mum feels like doing it again".

The years have been very kind, almost extatic for Kim Wilde. The English singer (1960), just misses the blonde punk hairdo that have been remodelled to a stylish one 25 years later.

Still there is the white smile that a boy would kill for at the time, the eyes of an angel on earth and the voice - slightly nasal, a pinch of aristocracy, a refined dosis of sultryness - of the unreachable beauty one schoolclass higher than yourself.

"O thank you", Kim Wilde shyly replies. "I believe that happiness shines through in your exterior. Plus I have a personal trainer who watches over me. After the birth of my children I had problem with my back; since then there is someone who watches my constitution and my eating habits."

Kim Wilde makes her comeback with the cd "Never say never"; a title that refers to her resolution to never return to pop music. Her family life ("I always wanted to get married and have children"), but also her career as a presenter of a gardening programme on the BBC and as a writer of books about gardening stood in the way of a comeback.

"I had a great time in pop music", she says. "A dream that came true. But in 1980 I was only 20 and there was still a lot of growing up to do. I only saw tv-studio's, airports, dressing rooms and hotels from the inside. The pressure of writing another hit became too big. Maybe I don't look like it, but I do think about think too much. I disguised it by the pose of the cool, distant singer. I thought: this can go on for another ten years, but then? Who am I when the singer Kim Wilde has disappeared?"

At 36 she ended her pop life consciously. She met the actor and writer Hal Fowler, with whom she has two children. "Fowler is an anagram of flower. Coincidence or not, but at the time I wanted to get serious about flowers and plants. Not just for the fun of it: I studied at Capel Manor College and got into horticulture. It was great, to just dig and get your fingers in the dirt, getting it under the nails. "

Kim Wilde was very successful in horticulture as well. She won the gold medal in the category of Courtyard Gardens last years at the Royal Horticultural Society Chelsea Flower Show. Her design: a garden with elements of the region Cumbria (the English Lake District).

"Flowers and plants are still the best thing in my life, but I now focus on my return to music. It's good to know a lot about the business. I'm not so scared anymore when Gene Simmons sticks out his tongue to me. As a girl I was totally shocked at the time."

"Oh well, I have gained a few pounds. The newspapers are always shocked y that. Pop stars who gain weight: they hate it. I don't understand why the media are so fond of women who look like skeletons. It's a bad rolemodel for girls."

"My husband will be a house man for a year. However much I will miss the kids sometimes - these two are the most exciting part of my life - I am going for it again. And if it doesn't succeed? I simply return home. The garden needs to be made ready for winter anyway." 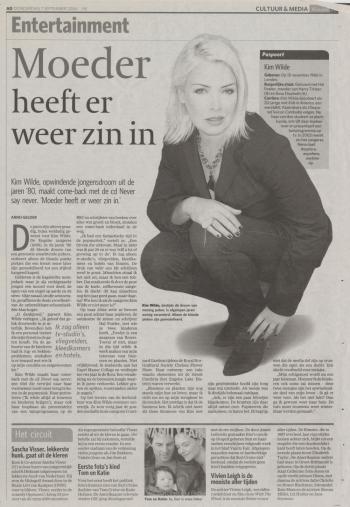