Ten years ago Kim Wilde swapped the stage against watering cans and building blocks. In Life! the 46 year old tells us about her life as a housewife and about her comeback.

Since she landed a top hit in 2003 with the Nena duet 'Anyplace, anywhere, anytime', Kim Wilde made her way back to the pop world, and now the British singer is back with the album 'Never say never'. Blue Slim Fit jeans, black jacket, platinum blonde hair. That's how Kim is sitting one warm September days in a hotel in Hamburg - and she looks and feels well: "A comeback like this has something relaxed. I come around, speak with interesting people and get to choose my own TV programme when I'm in my hotel room later. At home my children do that." Since Kimberley Smith said goodbye to the pop world ten years ago, her life has turned inside out. During rehearsals for the musical 'Tommy' in 1996 she fell in love with co-star Hal Fowler. They got married and moved into an old barn in the countryside of Hertfordshire. Within two years distance Mrs. Fowler had children Rose Elisabeth and Harry Tristan.

The blonde vamp, who had 14 number one hits and sold ten million alums, became above all a housewife and mother: "I let my hair become brown again and gained a few pounds. It was wonderful to not have to look perfect all the time." She discovered her love for gardening, and followed courses in garden design. She presented TV shows like 'Better Gardens', worked as a writer of books amongst other things. Last year she won the gold medal at the Chelsea Flower Show: "The gardening makes me happy every day. A fantastic deflection from music and at least as fulfilling, creative and challenging.

Her children see their mother in rubber boots more often than in high heels. "We have a normal home life. At seven my alarm goes off, drop off the children at school, feed the dog and do the laundry. I have to be organised to keep the household going." During the afternoon mama Wilde motivates her children to keep busy in the garden: "It is important to show your children as soon as possible, how beautiful nature is. It opens up your creativity. Children have to learn how fragile our planet is."

Unlike gardening, music has accompanied Kim Wilde throughout her life: she is the daughter of rock 'n' roll singer Marty Wilde, whose surname she's taken over. The eyes of the pop queen begin to shine, when she talks about her treehouse, which her husband and her have made for the kids. Or about the small artworks, which she is making for them from snail shells.

"I'd given up hope in my mid-thirties, to ever find a man I would want to marry. I never believed in a comeback. Now I am married and am doing interviews again. That's why my album is called 'Never Say Never' (EMI), says Kim Wilde. Besides six remakes of old hits, Englands most successful popsinger has recorded eight new songs. Good! 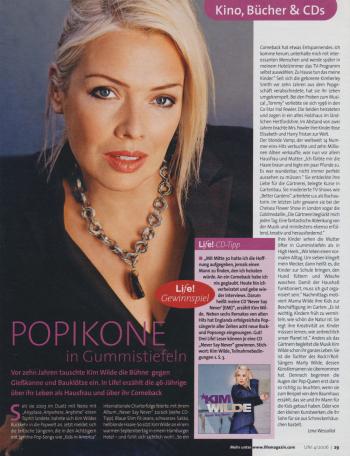