Kim Wilde, 45, is one of the most successful british singers of all times. Connected to her name are indestructible hits like 'Kids in America', 'Cambodia' and 'You came'. After a pause of more than ten years the pop icon from the Eighties has now worked with producer Uwe Fahrenkrog-Petersen, who also gave Nena her comeback. Kim Wilde's comeback is going to be great. The remake of her old hit 'You came' jus twent into the top 20 of the US-charts. An interview about old hits and kids, gardening and Madonna.

How was the ball brought back rolling?
When I married my husband ten years ago, it was like an indefinite goodbye to the pop scene. I left Kim Wilde behind me, became mirs. Fowler, the mother of Harry Tristan and Rose Elisabeth. But in 2001 I did a nEighties otur with Human League, ABC and Altered Images. But I didn't take it very seriously, I just sang the old hits, it was easy like that, just to go back home after it. The big change happened in 2003, when Nena asked me to sing a song with her. No-one expected that 'Anyplace, anywhere, anytime' would become such a massive hit.

Nena has Uwe Fahrenkrog-Petersen to thank for her comeback. Did you work with him because you home for the same successful comeback?
Uwe explained to me why he wanted to make a Kim Wilde album. He could convince me from every angle, and I had to admit I always belittled my career in the old days. Now I am very proud of what I have achieved in the past and I look to the future with hope.

In the Nineties you started a new career as wife, mother and a successful writer of gardening books.
I even went back to univerity, to study gardening and landscaping. I also worked hard for television shows. I won a gold medal with one of my gardens. When I turned back to music, I had to admit that I don't like to do things by half, and so I laid the gardening on ice for now.

You have re-recorded your world hit 'Kids in America' amongst others. Weren't you afraid to ruin what you built up once?
Oh yes. Especially with this song I got a very strange feeling. Uwe advised me to not hold back too much. I have become a much better singer these days, but with a strong song like that you may get a feeling you have to hold back. He put me in the right frame of mind to do it.

And what is that like?
My start as a singer was in the post punk era of the early Eighties. Rock and rock was my life. Without it life is a bit more secure, but also more boring. Fortunately the rebellious punk princess that was in me millions of years ago was still hiding somewhere within me. To discover that was an exciting thing to for a wife and mother of two. When Charlotte Hatherley from the band Ash got out her guitar and we played 'Kids in america' together, I suddenly felt the spirit from 1981 again.

'You keep me hanging on' gave you a number 1 hit in America in 1986. Why didn't you try to conquer America after that?
If I wanted to do that, I would have had to live there. I didn't want to. My family, too, advised me not to do it, although the record company and management had different opinions of course. Today I am very happy to see how things turned out. I am ambitious, but not overambitious. I shouldn't get into the league of Chistina Aguilera and Madonna. They are in a totally different stratosphere.

You sing the new version of 'You keep me hangin' on' as a duet with Nena. What connects you both?
In the beginning I thought I was looking in the mirror when I looked at Nena. There are so many similarities between us, and not just the singing. We both have a family, love children and are both involved in school projects. Between us there's an invisible bond.

Are you ready inside for the new start?
The idea that I have to travel around the world again gives me sleepless nights. My children are six and eight years old, they simply need their mother still. But they already understand what it means to be a singer. My husband and my mother will take care of them when I am not around. My instinct says that I should do this now. I could always trust my instinct before.

What do you feel when you see old Kim Wilde photographs?
I still know what youth feels like and what it means to become a popstar at 20 years old. I was fascinated by punk, wild hair and second hand clothing. I didn't get to the worst fashion crimes like shoulder pads and netted shirts, but there are photographs from the past that seem painful to me. When the Eighties were over, everyone started making fun of the decade, myself included. Today I am more sovereign and respectful towards the past.

Many of the artists of your time are gone. Why do you think you managed to survive the Eighties?
It has a lot to do with my family, as we were always an unbelievable team. I was always protected from the worst excesses of the music industry. They taught me to stay on the ground with both feet and to invest my money wisely, instead of spending it on drugs and parties.

What is your life philosophy like?
Trust your instincts and do only that which you think is right. Listen to the people you trust and accept yourself as you are. Thanks to my husband Hal and my children Harry Tristan and Rose Elisabeht I am a different person today. 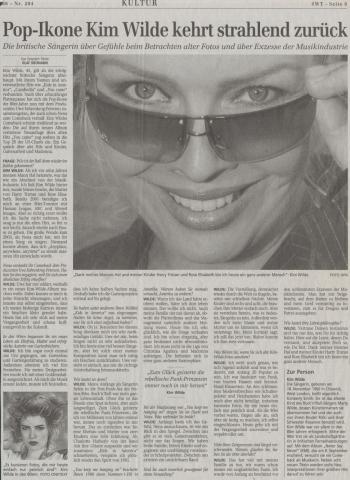