Pop in the back garden

[Translated for Wilde Life by Jakob]

The popstar Kim Wilde crawled down the charts and became a gardening expert. Now she releases a book about children in the garden.

In the eighties Kim Wilde was the pop dream for many teenagers who liked pop music and dancing. Today the former big selling pop princess England’s leading gardening expert.

Already when she was active on the international popscene and released records, Kim Wilde trained horticulture. In several years she has hosted different gardening shows on BBC, amongst others 'Garden invaders'. Also the English newspaper readers have been able to follow her weekly column in The Guardian. Kim Wilde is now releasing her gardening book which in Danish is called 'Med børnene I haven'. A very sensible book with lots of do-it-yourself tips, age-level marks etc. about how children and grown ups can have quality time in together the garden.

It is Kim Wilde herself, her husband Hal and their children Harry and Rose who toddle about in their own garden. On the many pictures in the book the reader learns how to make mosaic rabbits, plant seed and that it feels nice touching a sunflower.

With her first single 'Kids in America' (1981) she crashed in on charts all over the world. The debut album 'Kim Wilde' did as well. The music way was a family affair, because all songs where written by her brother Ricky and dad – the former pop singer Marty Wilde.

In 1982 her new hits where called 'View from a bridge' and 'Cambodia' – songs carried by Kim Wilde's nasal and sensual voice. Again in 1986 she scored a massive hit with a cover of The Supremes 'You keep me hangin' on'. The changes in the music scene haven't always been kind to Kim Wilde and after some more records she released her last album in 1995. 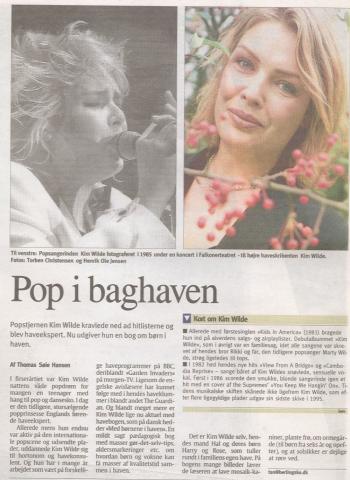