Singer Kim Wilde releases a new album this summer for the first time since 1995. The cd is called 'Never say Never'. First there will be a single with the title 'You came', a new version of her hit from 1988. Besides this track there are a few more older songs on the album in new versions, as well as new material. The English singer released over thirty albums and nine singles between 1981 and 1996. Her latest success is from 2003, when she sang a duet with German singer Nena. 'Anyplace, anywhere, anytime' was a number 1 hit in the Netherlands. 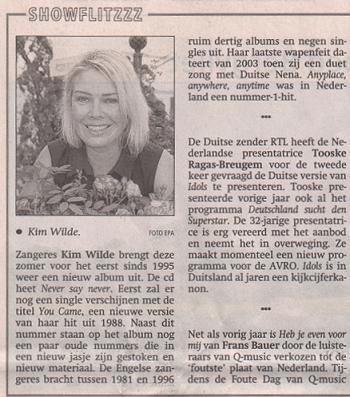