Kim Wilde seemed to have a life apart from her existance as an unemployed popstar. Now she makes music again.

"Have you seen Robbie Williams already?" (The interview took place at 11.50am in the Park Hyatt in Zurich in a conference room, and he would have been at a brunch somewhere in the hotel, said someone from Blick, who had pickett service in the hall.)
"He is here, I heard".
"Now, and?"
"No"
"Although he is from the same record company as you?"
"Is he?"
"Yes"
She laughs, as she probably already laughed when she was still Kim Smith and lived with her parents, on the countryside outside of London. (How could I otherwise describe her laughter?)
"I go to a dinner hosted by my record company later, perhaps he is there".
"Do you have any tips for him? You know the music industry longer than he does".
"I don't give any tips, except if people ask me for them".

On the table there are autograph cards from her. That is, I assume their are from her. The photographs doesn't look like the woman in front of me: the hair on the photograph is very blonde and look like a model from L'Oréal, the skin on her face is white like Dita von Teese (or Snowwhite for the older readers) and a body like it was copied and posted into the picture from the swimsuit-issue of Sports Illustrated.
(The world week photographer worked on his pictuer as well, I saw. A few words seem to have more authenticity than thousand pictures.)

"Gardening is your occupation, music your hobby, you said once. Is that still true?" (She took a horticultural course ten years ago, then presented gardening programmes on TV and wrote a gardening column.)
"Yes, it has developed like that, bizarrely. I was an unemployed popstar, then a job offer came as a gardener."

"And now ,with the new album, the comeback attempt?" (I am not a music critic and say nothing more about it, except this: responsible for the cd is the person who used to produce Nena's music)
"If I am 55 and still sing, then I will say that I make music and do gardening as a hobby, but right now the music feels like a hobby."

"And recently you said: 'I recognize now tha tthe pop world was more interested in me than in my songs'. Sounds rather depressed."
"The music industry bored me."

"What was the music industry interested in, then?" (The answer is predictable like the one to the question: what attracted Raquel Lehmann first to Multimillionair Jürg Marquard?)
"Sometimes the people were already interested in my music, sometimes however more at my image." (Mister Marquard's humour and his manicured hands.) "But the longevity of my music shows that I should in fact get more credit for it."

"Nevertheless you met Lou Reed backstage once, and said 'A comical man, really'".
"He comes around like under a glass hourwork. And he has someone next to him like a mother next to a child."

"Not so well-behaved, if you ask me."
"I heard his records as I grew up and he sang about all these dark things, and I thought he was a hard chap."

"Interesting that as a popstar yourself you think other popstars are like their image, don't you think?"
"Yes."

"However, you like amusing chaps, you said. What attracts a woman to amusing men?"
"I like people, who see the world differently. If we both look at the same cup of peppermint tea and you see a completely different cup, I find that positively exciting."

"Is there an age limit, over which a woman should wear no more leather trousers? You don't wear them anymore."
"I carried them, seven months ago. That's why I don't think there's an age limit, no."

"The leather trousers have to thus do more with the attitude of mind than with the age?"
"That too, yes, exactly." 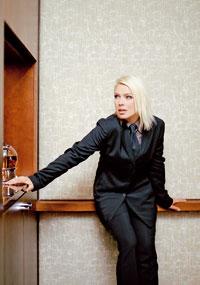