The queen of pop comes back!

Absent for a decade, Kim Wilde, the "Brigitte Bardot of Rock", who performed unforgettable worldwide hits, has never really forgotten her passion for music. Twenty-five years since her first hit, "Kids in America", one of the most shining stars of pop comes back now with a new album, "Never say Never", a new selection of songs containing her old hits as well as new songs. It's undeniable that the queen of British pop is back.... An interview at the Moulin de la Galette in Montmartre where Dalida had a table...

Why did you want to stop ten years ago?
I had enough of the music industry, of its commerciality and the speed and stress it came with. I wanted to do other things than just music at the time. When I was offered a role in a musical and I met my husband and had children, that changed my life!

Most of all, you had a career in horticulture! You have designed gardens, wrote and published two books about gardening and had success transplanting the biggest tree, which landed you in the Guinness Book of Records. Where did this passion for horticulture come from?
I was born at the countryside and since I was very small I had this relationship with nature, but I became disconnected through the years, and I wanted to return to my roots. After meeting my husband I had the chance to return to the proximity of nature and I made a beautiful garden. Also I started studying horticulture when the whole gardening world seemed to explode in popularity. I got propositions for collaborations. From there the books started and the transplanting of the tree.

In 2003 you recorded the duet "Anyplace, anywhere, anytime" with the German singer Nena, and gave concerts again. What is the motive for your return? Was it you missing the scene and your taste for music?
Nena's career had gone a little quiet. She had a project re-recording her old songs. We met during this project and effectively I started doing concerts as a revival of the eighties. It was a period of revival in the UK. There was a great audience for that sort of thing.

Your album is called "Never say never" because one should never say never, and, in fact, because of your return to music?
When I quit ten years ago, people in the music industry said to me: "If you go, you will never come back!". I have demonstrated the contrary.

How did the choise of songs for this album come about?
There were obvious ones, some songs you couldn't pass over like 'Kids in America', 'You keep me hangin' on', 'View from a bridge', 'You came', 'Four letter word' and a remix of 'Cambodia' by Paul Oakenfold and then there were new songs.

Which is your favourite song?
Without contest, "You came"!

The new album contains a big part of your hits, re-recorded with a soundscape much more rock oriented. Whas it your preference to have a more rock oriented sound?
This music is made to be played live. For some years, I have gained a lot of experience playing live. It is a preference because it is a much more energetic sound.

"Kids in America" was recorded together with Charlotte Hatherley from the group Ash. Why this collaboration?
I loved her solo album. It's one of my favourites. And she named one of her songs "Kim Wilde". We met. She loved "Kids in America" so our idea to do it as a duet came naturally.

One of our singers, Laurent Voulzy, did a tribute to you in a more tendentious way...
I was very surprised by that song. I thought it was a beautiful pop song but in the beginning I didn't understand the words...

And after you understood them?
It made me smile...

You were a true sex symbol in the eighties. How did you see that?
At times very flattering but also often very hard to carry!

You said that this music was made to be played live. Is this going to happen? When will your return to the stage be?
It's true! I want to play live as soon as possible! Beginning of 2007 I think. It does depend on the success of the album, but no matter what it does, I am proud of it. 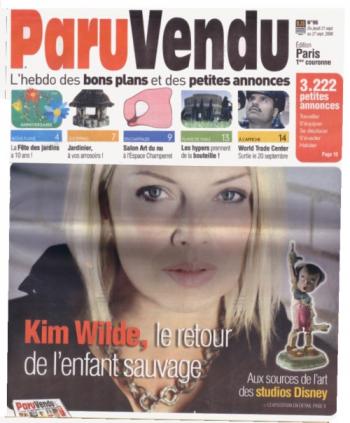