For eight years, singer Kim Wilde enjoyed a love affair with fame with hits such as Kids In America. But then she discovered two new passions and jumped off the pop rollercoaster. The daughter of 50s rock star Marty Wilde found her soulmate AND a new career as a garden designer and TV presenter. Her latest book First-Time Gardener (HarperCollins, £17.99) is out on Monday.

Here Kim, 45, who lives in Hertfordshire with her husband Hal Fowler, 37, a producer, actor and singer, and their children Harry, eight, and Rose, six, tells Yvonne Swann how it happened.

My parents were singers and my brother is a talented musician too. So my childhood ambition was quite predictable: I wanted to be a glamorous pop star. At school I just concentrated on the arts and then did a foundation course at St Albans College of Art & Design in 1980. I'd just finished the course when my life changed completely.

My brother Ricky had started writing songs and found himself at Rak Records with Mickie Most, who quickly recognised his talents. I started trying to take advantage of his good fortune as a session singer, doing the backing vocals. I thought I'd be under no pressure. But fate had other plans. Instead of being able to skulk around in the background I suddenly became the main focus. It was very exciting and within no time we had recorded Kids In America, which became a big hit worldwide in 1981. Dad wrote the lyrics and Ricky wrote the music. Things all happened at high speed after that. Before I knew it I was on planes to Germany and meeting lots of other pop stars and feeling as if they were all real pop stars and I wasn't. It was crazy. I coped because I was living at home with Mum and Dad. They helped me keep my feet firmly on the ground.

MY pop success was pretty solid for almost eight years. I loved it. It was only when I reached my 30s that I thought there must be more to life than this merry-go-round of touring and interviews about my love life. I moved out of London to Hertfordshire. That gave me space and time to really focus on my life. It was a time of transformation and I came out of my feelings of depression fairly quickly. Then I was asked to star in the musical Tommy.

Tommy changed my life, because I met Hal - my co-star. When I walked into the rehearsal rooms and saw him I knew I'd found my soulmate. From then on all I really wanted was to get married and have babies. I felt very comfortable about dropping my pop career like a hot cake. Very soon I was pregnant with Harry.

I thought I was going to put my feet up for nine months, but because I wanted to create a lovely garden for my babies I decided to take a two-week summer horticultural course in London. It was like a light being switched on. I was hooked. I went on to study horticulture and garden design very seriously and was quickly gobbled up by television. I worked on Channel 4's Better Gardens, followed by two series of the BBC's Garden Invaders.

In 2001 I got tempted by an offer to perform with a lot of my heroes and heroines in the Here & Now Tour, an 80s revival concert starring artists such as Paul Young, Human League and Howard Jones. I had a great time. Music has become a hobby again. I even had a No. 1 hit in Europe in 2003 with Anytime, Anyplace, Anywhere. I am recording an album - a German release which is out in the summer.

I love writing about gardens. I'm amazed at the success this garden thing has been. I won gold for my garden design at Chelsea last year!
And I love being a wife. When I was young I thought that would be really restricting. But I've found it the most incredibly liberating experience of my life.

Be willing to take chances and jump in at the deep end. Feel the fear and wade through it. Not playing too safe is definitely important. Work hard and follow your passion if you can. It really is possible for people to follow their dreams AND pay the bills. 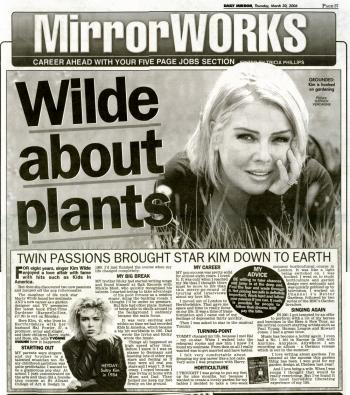