Kim Wilde (45) comes back as a pop singer after marrying, having children and a career as TV-gardener.

With 'Never say never' the eighties pop icon Kim Wilde has a comeback consisting for one part out of new songs and the other half of remakes of her hits like 'You came' and 'Cambodia'.

The retirement from the music business ten years ago had different causes. "As I felt my record company at the time had lost their faith in me I suggested to retire with my pride intact", she says during her visit to Zurich. "Shortly before that I met my husband during my work at a musical. As I wanted to get married and have children as soon as possible anyway, I felt liberated." During her first pregnancy Wilde wanted to make a garden for her house and started to learn about gardening. Nothing came of the silent family life.
"The BBC wanted me to present gardening programmes and it became the five busiest years", she laughs. "I gave birth to my son and daughter, meanwhile I designed and made gardens for strangers. It was a lot of creative and physical work for me - carrying heavy loads of wood around!" She made the move from popstar to gardener.
An eighties tour gave her different thoughts again. Then the Nena duet "Anyplace, anywhere, anytime" followed, where she met producer Uwe Fahrenkrog-Petersen. "At first I was sceptic, if the Nena recipe, a mix of old and new, would function in my case. I was afraid an album like that would sound tired and slightly tragic. But with his enthusiasm he dispelled all doubt."
Kim Wilde even interpreted her first hit "Kids in America", a song she hated for a long time, because many people reduced her to this song, again, which makes their live particularly joy. "if women and men look at me with a special look, because I carry them back to their youth, I feel as if I have conquered a small place in their hearts." 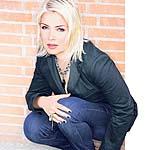