Pop-star-turned-gardener Kim Wilde tried to enjoy golfing with her rock'n'roll dad, Marty, but was more interested in sharing her passion for the flora

Marty Wilde: We played some golf at Brockett Hall, and we might just as well have been in the garden. Wherever Kim went she was explaining what all these plants and flowers and trees were. You know, perennials and all that - words that don't enter my vocabulary.

Why I've always disliked gardening is this: in the old days I'd come home after working very hard and would have to cut all the grass. Two-and-a-half acres of it. I'd be getting in at 3am or 4am and by 10.30am I'd have to be out. It would take four hours. I tell you, it was a killer. The biggest kick I get nowadays is watching somebody else sitting on one of those sit-on jobs out there.
My wife Joyce has always loved gardening and she inspired Kim. I never thought of Kim in terms of being a pop star or a gardener. But looking back, I can see it now. Well, the garden had to be maintained by someone ... When we moved here to Hertfordshire we didn't have a gardener, so it was Joyce and little Kim trotting out in their boots.

Kim is to me a bit like, not a beatnik exactly, but put it this way: she's not a prissy-prissy, neat-neat, tidy-tidy kind of person who worries about her make-up. By and large Kim is happiest when she's being herself.

When she was a little kid, I was always too busy worrying about a million other things. And like many fathers, I now look back and wish I'd spent more time with my children. She grew up with her mother. I was quite immature as a person, and being an only child, quite a self-centred one. But on the other hand, there was always a great bond between Kim and I. Not a deep one, but it's there.

On the golf course, she was amazingly good. It started to bug me, to be quite honest with you. I wanted her, really, to top the ball and hit it all over. But, oh no, quite the reverse. I gave her the basics. A second's lesson. Keep your arms in the v-shape, cock your wrists and when you come down, hit down. And she hit it straight away. Hmm, I thought ... And round we went - bang, bang, bang!

She'd be a dream for someone to teach. She really does concentrate; really keeps her eye on the back of the ball. All this aptitude and concentration and fast-learning told me one thing: she's highly intelligent. She can learn to do anything. If she'd have wanted to be a doctor, she'd have been a good one.

And unlike me, who's all fiery and explosive and short-fused, she's a sticker. She's laid back and she's a stayer. She's been like that all her life. Not a quitter. And she's beautiful too. She's got the lot.

Kim Wilde: I first had a stab at golf years ago when the whole golf thing caught on in a big way, and Knebworth golf club became an integral part of family life - going up there with Dad, or picking Dad up from there, or going to meet him there, or Dad meeting someone there ... And I remember having a stab then. I think I was quite good but it didn't grab me. It bored me rigid in fact. So when I went there recently with Dad it didn't surprise me that I felt exactly the same way.

But it was lovely to spend time with him, because it doesn't happen that often these days, to have a few minutes watching him in his world. It's a bit sad, though, that he only comes to the conclusion that I'm intelligent when he sees me trying to hit the shit out of a golf ball. But he loves it so much ... I found it quite easy actually, despite the boredom. But I was disappointed that I didn't feel more joy about it, because I love the idea of wandering around golf courses with my dad and spotting muntjac and pheasant and thrush, admiring the sky and talking about trees and picking up seeds. That was really lovely. But it kind of got interrupted every now and then by us losing the ball and having to traipse around looking for it.

I can see all the great things about golf, but I'm not drawn to it. He's the same in reverse. He can see what's great about gardening but he doesn't feel motivated to get involved. These are the things that separate us humans - our passions lead us to different places. What Dad and I have in common, for sure, is passion. And we do have a passion for the landscape.

The transition from pop stardom to gardening was a long one in some ways. It was shortly after doing the Michael Jackson tour, in 1988, that I started thinking about it seriously. I'd been chasing this dream and I watched [Jackson] and it seemed like he was the end product of that dream, and I thought: that's not what I really want. Why am I on this road if I don't want to get there? I started to think, "What does an unemployed pop star do?"

I was asking these questions for years before I took the step, when I was 36. And it was only when I met my husband that I got the courage to step out from that. Great! New name, new identity. New life. I don't remember discussing it much with my dad. I've always made my own mind up about everything. But I was aware that he thought I was throwing away some very precious gift. I got the feeling he felt I'd worked very hard for something and that I should treasure it more and not fling it away like an apple peeling. But I knew that being a family person and having a career like that ... the two things weren't compatible. It was a real, lovely relief to wander off with my new name and my new identity: Kim Fowler. As it turns out, Fowler is an anagram of flower.

I'm surprised that Dad doesn't want to get more involved in the garden. But it is in him more than he admits to himself. He loves art and the creative world, and we have a lot more in common than may appear. He's a much better father than he gives himself credit for.

· Marty Wilde's Born to Rock n' Roll: The Greatest Hits is released on March 5 on Universal

The following correction was printed in the Guardian's Corrections and clarifications column, Thursday March 8 2007

In our interview with Marty and Kim Wilde below, we imposed on the latter the statement, "I love the idea of wandering around golf courses with my dad and spotting monkjacks and pheasant and thrush ... " The small deer commonly seen are muntjac not monkjacks. This has been corrected. 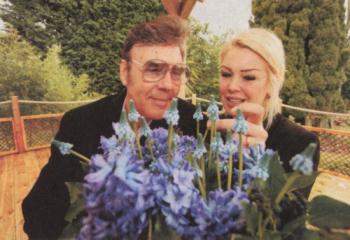