Echoes from the pre-dumb blondes era

The French call Kim Wilde the 'Brigitte Bardot of rock'. In Germany she is known as 'sexiest glamour girl of the eighties'. Just goes to show what the combination of a singing blonde and a string of hits ('Kids in America', 'Cambodia', 'View from a bridge', 'Love blonde', 'You came'...) can cause. For ten years music was no longer a priority for her. Kim Wilde did appear for the world record attempt of toppling domino stones, visited VTM's Big Brother house ("I wondered what it would be like inside. Now I know that I would be bored to death in there.") and flourished into the British Miss Green Fingers with successful gardening programmes and -books. Since 'Anyplace, anywhere, anytime', her hit with Nena (from '99 Luftballons') she is back into music again and Kim Wilde is wearing leather trousers again. Kim Wilde: "When the duet with Nena took off I realised how much I really love music. I got out of this merry-go-round because I was bored of being Kim Wilde. When the record company wanted me to record a new album, I was a bit skeptical. Nena and her songwriter got me into it. I never thought I would be able to enjoy this once again."

Why do celebrated popstar complain so much? Once the success is there, it's what you've been striving for, isn't it?
That's right, but I was into it for longer than was good for me. I was relieved to have success at such a young age. Without having to look for a job, I was paid to do what I wanted to do. I felt like I was the happiest girl in the world. When I turned 30, I wasn't having as much fun. I got the feeling I was using up myself. I thought I should get a balance into my life. I did, in time. I turned my back on the music world with a sour taste in my mouth. In the ten years I was away, I have been able to build another life. That helped me to realise how much I like singing and performing.

You were so tired of 'Kids in America' that you didn't want to sing it anymore. Did you change your mind?
Yes. Women are allowed to do that, you know? (laughs) My brother Ricky, who wrote most of the songs, and my sister Roxanne are in my band. So this tour is going to be like a family trip. Now that the pressure is off me, I can celebrate my past as well as looking forward to the future. I am curious whether the audience wants to follow me.

When you compare then with now: what has changed?
Most of all, I'm 25 years older. When I started, I was 21. Now I am a 46 year old mum who looks at things differently. The music world is much more open. Thanks to websites like MySpace and YouTube talented people are able to express themselves much easier now. A record contract and an expensive studio are no longer required.

Many of your hits have been covered through the years. Any favourites?
I liked the speed metal cover of 'Kids in America'. I also liked the versions of 'Cambodia' made by club deejays. I always feel flattered when people cover my songs. I like a lot of different styles myself. Dance, r&b, country, soul, classical: I listen to it all. At the moment I'm really into pretty high energy rock. The time I make music to enjoy with a glass of wine hasn't come.

At the end of the eighties you opened concerts for Michael Jackson and David Bowie. Traumas or memories?
The tour with Michael Jackson was unbelievable. I still meet people who were at one of the seven shows in Wembley. I found it fascinating to see how someone was living in such an alternate reality. I felt for him and was happy to still be able to go to the supermarket myself. It was different with David Bowie. He was very down to earth and was very friendly. Not easy for me, because secretly I was madly in love with him. After that tour he met his current wife Iman.

Bad luck! So it could have been you living in Manhattan and raising Bowie's kids?
Haha, things could have turned out that way, yes. I don't regret that they didn't. Ten years ago I met my own husband. He works in the theatre in London. Together with our two children we enjoy life to the full.

In your glory years people didn't make any jokes about dumb blondes. What's the biggest misunderstanding about Kim Wilde?
That I'm smarter than I look. (laughs) I'll leave it to everyone to form their own opinion.

Finally: any gardening tips for this year?
Mine doesn't look too great right now. So just start with cleaning up. 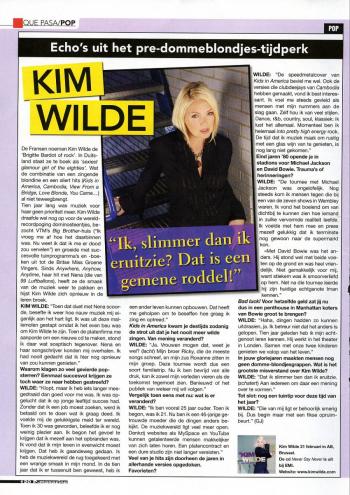