I became a pop idol too young

She was tired of being a popstar, so Kim Wilde put the music behind her and got her own gardening show on BBC instead. She was only 20 when she became a popstar, but in the end she didn't feel challenged by the musiclife anymore. "I was 36 and bored", says Kim Wilde in an interview with Børsen. But now the icon of the 80's is back on stage. And it's fantastic, she says. "I enjoy performing more than ever before. I think I got too much, too soon, to really appreciate it," She says today.

[Translated for Wilde Life by Anders Storm and Tim Nielsen.]

1981: Kim Wilde is flirting and pouting at the videocamera circling around the 1980's new pop-babe. The british girl who is only 20 years old is having her breakthrough in 1981 with "Kids in America", and teenagers all over the world are plastering their walls with posters and Bravo pages with the blonde and back-combed idol.

2000: 19 years later a dark haired Kim Wilde carries an old toilet out of a messy garden in Northhampton, wearing a yellow windjacket and baggy jeans. The popstar has put the microphone on ice, has become married to a stageactor, has two children, Rose and Harry and has become a gardeningstar as a host on the BBC program "Better gardens", where she and another expert redesigns ordinary peoples uncommonly messy gardens.
2007: Last week she went on stage at the Langeland festival with among others, the songs from her CD "Never say never" from last year.

The cheeks has become fuller with age, but the popsound is more or less the same as always. The 80's icon Kim Wilde is back on stage after several years in the garden, and along she has brought the synthesizers, her reblonded hair and her brother and guitarist Ricky Wilde, who has written all of her hits. "Everybody lives for the music goes round" sings the 46 year old singer on the big stage at the Langelands festival, only God knows how many times she has sung that before, while she a bit shy pulls her tight Iron Maiden t-shirt down in front where it shows her belly button sometimes. Kim Wilde has gotten older in several ways, and she doesn't live for the music alone anymore.

"I was 36 years old, and I was bored. I had been in the music industry since I was 20 years old, and I didn't feel any challenge anymore. I have had plenty of hits and been on long tours, and I couldn't imagine that it would make any difference if I went on more tours", Kim Wilde explains when Børsen meets her backstage after the concert.
She has changed from the very high heeled and very red shoes to a pair just as high but violet, and the black stage makeup surrounding her eyes is still the same as back when she broke through.
She followed her urge to peel of the musiclayer to see who she was, when she wasn't the star Kim Wilde.
"Who would I be without the pout?", as she says, and luckily enough she did like what she saw. "I was far more interesting than I thought - ha ha ha" she says laughing wildly almost to her herself.

As a youngster she was educated on the St. Albans college of Art & Design and she felt a strong desire to learn again, and joined the prestigious Capel manor college to become a landscape gardener.

Wild about the celebrity

The board on the college was wild about having a celebrity going to their school so they spread the happy news. So when she was educated, Channel 4 hunted her down to host her first gardening program. Afterwards she shifted to BBC's "Garden Invaders" and in 2005 Kim Wilde won the goldmedal in one of the in England so popular gardening exhibitions, the prestigeous yearly Chelsea Flower Show. "It was such a relief that the focus had moved from me as a person to the plants, the design and the other people in the programs and the world of gardening. I could let go of the feeling of being watched all the time", Kim Wilde says.

Don't you think the people at home in their sofa was watching the popstar Kim Wilde - now in a garden?
"Yes, maybe, but now I wasn't wearing full makeup, and my hair was brown. I was being pretty overweight after giving birth twice, so it wasn't foxy Kim on the screen. It was just Kim, who was a mother looking like one, and Kim loving going into the garden and showing her enthusiasm about it. I think maybe it was a relief for a lot of women out there in their living rooms to see, that they weren't the only ones gaining weight, and looking middleaged after giving birth. And then they could look at their husbands who had adored me once and point at me and say: She can look like that too," says Kim. Besides doing other peoples garden she also has a giant garden by her house in Hertfordshire.

It has wild flowers, herbs, vegestables and tropical plants side by side, and she loves to have her hands in the mould and to laugh with the gardeing people.
"I feel fantastic after a day in the garden. And it makes me so happy being part of the community and the garden cultur. I have meet some really good friends and is very involved in the gardens society." says Kim Wilde, and her fanclub homepage is of course called wildelife.com.
Her fans had a very important role in the comeback on the stage. Just as she thought she had put music behind forever, she got tempted to join the 80's Here & now tour.

She had refused for four years but got tempted by the good money, and the fact that she was to go on tour with her old heroes the Human League and Altered images.
"The money got to be the least part of the fun. I met all my heroes and enjoyed being back and kept on touring for one month year after year, when the gardeningseason was over. The audience was so nice to me. I thought they would have forgot about me or didn't care about me. But they were fantastic. So here I am. And I enjoy performing more than ever. I think I got too much too soon to really appreciate it," says Kim Wilde, who threw her last name away together with a lot of other stuff, when she changed direction. "My married name, Fowler, is actually an anagram for flower. So it turned out that my destiny was to work with flowers." 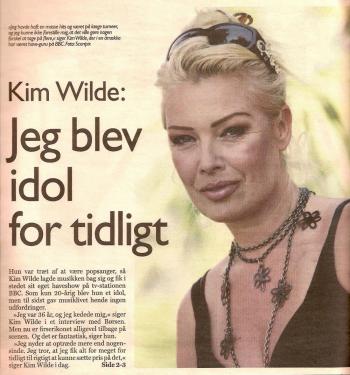 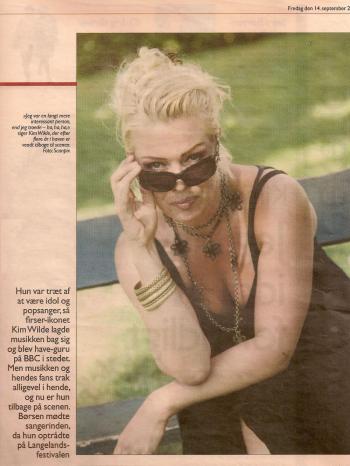 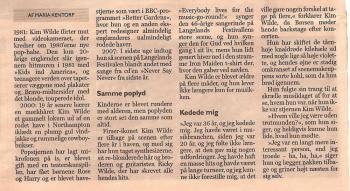 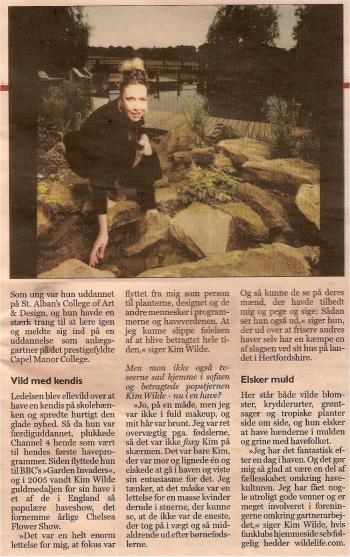