'I'm taking a break from the family'

After 13 years the blonde eighties icon goes on tour again. Why does she? The British singer tells it here...

She has just as much energy as she did back then. In 1981 the British woman became an eighties icon with 'Kids in America'. Over 30 million records she sold, of which 14 number one hits. Though in later years her husband Hal Fowler, the two children and her big garden in Hertford near London were more important than music. She made a profession out of her hobby, and wrote gardening books. Now Kim has left the flowers and returned to the mike: on September 4, 2006 her album 'Never say never' was released. And starting on March 4 she gives concerts in München, Köln, Hamburg and Berlin.

From where comes the desire to go on tour again?
Nena was a big inspiration after our song 'Anyplace, anywhere, anytime'in 2003. It is a great experience. I have collected a lot of strength and I am ready for concerts.

The music business has changed a lot since 13 years ago...
I know, it won't be easy. I am away from my family and some people will criticize me. But I have no fear for a big fight. I don't look at the goal in the end, but I am enjoying the journey. And if no-one wants to see or hear me, I have at least tried.

Do you think your looks are more important than your talent these days?
Of course people will look at my body. And hey, I am not 20 anymore. But I want to go on stage again! That does put a pressure on me. It does make me look after myself and my figure more. But many famous women of my age have eating disorders, because they want to become unnaturally thin.

Is it important for you to be slim?
I have relaxed about that. After the birth of my two children I have gained some weight, and that weight won't come off entirely anymore. But I wanted to feel sexy again. That's why I have a personal trainer since two years. I have the body I want to have at 46: it's not a size 38 - but not a 44 anymore too. I am somewhere in between. But of course I want to be sexy for my husband as well.

Who's taking care of the children during the tour?
My husband looks after them. He is an actor and knows what kind of stress hits me right now. Hal puts the backburner on his own career and is a houseman for a while. It's wonderful!

Do your children like your music?
They don't see me as a popstar. I don't make a secret about my comeback, but I also don't put any emphasis on it. My children have had my album in their hands, but haven't heard it. Harry is nine years old, he prefers a band like Greenday. Rose is seven and a little too young for music. But when I drive them around in the car, she always wants to hear Kylie Minogue.

Does it have any advantages to leave the family for a while?
Honestly? Yes! It is great to step out of the daily chores for a while, to step away from cooking, cleaning, the school run and everything. I believe every mother thinks that way. But despite my career as a singer, my family will always come first for me!

As sexy as in the old days the stage clothes will be. 'My new songs contain the best of the eighties sound', tells Kim Wilde. That's why she has taken on her favourite look for her concerts: hot leather! 'It's wonderful to wear cool stuff again', she says. Even her hair colour is back: just like the dark make up on the eyes and a very red pout on the lips. 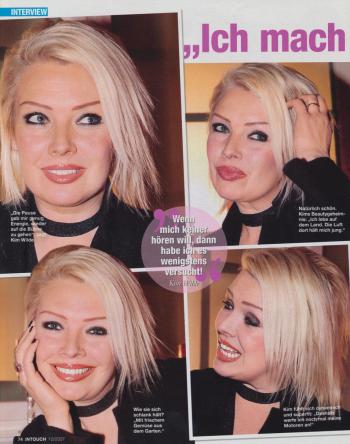 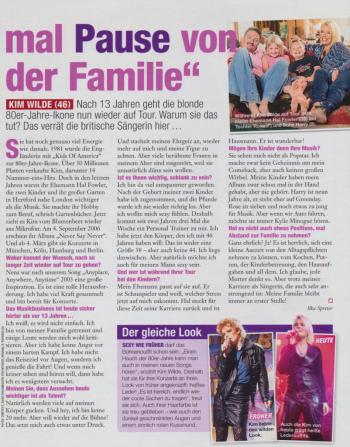