Even though I've been to the Hampton Court Flower Show about five times in its 18-year history it never fails to amaze me. Every year there is something else to marvel at. Flower shows are special because people put so much passion into them.

A lot of it is about performing and, being a bit of a theatre luvvie myself, they tend to attract me. I love things that are both aesthetically pleasing and clever. I got into gardening because of my children Harry, who is now nine, and Rose, who's seven - I wanted to encourage them to do it.

I signed up for a horticultural course at Capel Manor College in Enfield, North London. It was life-changing, and I ended up doing lots of TV makeover shows, which were great fun. Looking around the gardens here, and appreciating the dedication and imagination that has gone into creating them, reminded me of the times I have been involved in shows. A couple of years ago I helped my friend Richard Lucas plant an enchanted garden here. But the highlight was when I won a gold medal at Chelsea for my courtyard garden, the Cumbrian Fellside garden. It was voted Best in Category and the People's Choice.

I expected competition among the garden designers here to be fierce, but there's fantastic camaraderie. People are supportive: they give you plants and help you when they can. But it's still nerve-racking when the judges come round. It was hilarious at Chelsea because we could see the judges about 100 yards away. they were just about to turn to my garden when the pump in the water feature started leaking. The whole place was awash and Richard had his hand down the pipe trying to stop this sea of water. We had brooms out and were throwing bark chips over the flood and then had to stand there and pretend nothing was wrong.

So when I arrived through the Stud Gate for this year's Hampton Court Show, my heart went out to all those people who have been dodging the rain this year to build their gardens for others to enjoy.

The showground has many small gardens. Even with a tiny space, people are so inventive. I love the tranquil Silver Glade garden, which is excellent for spotting wildlife. And I like the Sadolin Garden of Regeneration, which has made the most of recycling materials, such as old floorboards, to make things like a composter. It looks so pretty with the wild strawberries growing in it. The Paved Green Terrace Garden is also fantastic because it shows how a small front plot can have space for a car and be eco-friendly.

Across the showground it was great to meet children like those from Alton Infant School in Hampshire, and see what they have grown - from vegetables to flowers like chocolate cosmos, tiny blooms that do smell like chocolate. It was rewarding to hear from the head teacher that they have been using my book, Gardening with Children. This features projects I've done with my own son and daughter, like growing vegetables and planting things which will attract butterflies.

When I was a child, I lived in Hertfordshire with my parents. We had a beautiful garden, full of rhododendrons, azaleas, peas and marrows. I loved it. In those days, more people made bread, grew their own veg and made use of the land. You'd use rhubarb you grew yourself if you were making rhubarb crumble. That sort of self-sufficiency made a big impression on me. I could have happily spent a few hours in one of the deckchairs in the Infinity garden, which has a round sunken terrace surrounded by water. It would be a soothing place to daydream.

I will definitely be visiting the Country Living pavilion, as I've always enjoyed it. I have been known to leave with silver necklaces, chiffon shawls, as well as lots of plants. Jewellery and a pashmina are on my shopping list this time.

Hampton Court is beautiful. A few years ago, I took my husband to the gala evening and sipped champagne by the Long Water. We were entertained by musicians and acrobats. Walking over the Long Water bridges with Hampton Court Palace to your right and the prospect of the main show gardens in front of you is lovely.

There are gardens to suit every interest. The Croft Garden is filled with roses - who wouldn't want to sit in it and enjoy their scent? Don't miss the Growing Together Garden, with interlinking pools. Or Nigel Boardman's A Midsummer Night's Dream garden - it's amazingly colourful. I like gardens that invite you in, rather than ones that you observe from behind barriers. I was welcomed to the Mange Tout garden with a leaflet written on rice paper - what an ingenious idea!

There's a lovely waterwheel at the Southend-on-Sea Borough Council Miller's Garden. I also loved the I'll Drink To That garden, which has been built by Paul Stone, and the Eden Project, because it cleverly blends plants from hot regions with their cooler cousins. The Conservative Foundation garden is charming, too, with its agapanthus and oaks. And the Fallen Garden, which mourns the loss of native British species, makes a very strong point about how easily our delicate environment can be destroyed.

One of the 'wow' gardens at the show is In Digestion. Tony Smith has planted a carpet of more than four million tiny lettuces as part of a message which contrasts the natural world with a man-made one. His point is that the natural cycle of lettuces is broken because they are picked for food before they flower and seed. You can look through his telescopes to get a close up of carnivorous plants like Venus flytraps.

Give yourself plenty of time at Hampton Court because there is so much to see. It doesn't matter if it rains because you can always plunge into one of the floral marquees or the Daily Mail's fabulous pavilion which this year is very traditional and also terribly romantic. 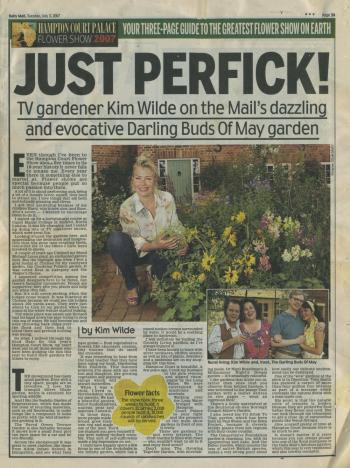