Those who keep track of people in the news know that British pop star Kim Wilde honored Iceland with a ticket at the airport in Egilsstaðir last Saturday.
From there she went to Keflavík and stayed overnight, according to the Faroese news portal (www.portal.fo).
The reason for this visit to Iceland was that it was impossible to land at Vogar in the Faroe Islands because of fog, but Wilde had to catch up with the musician Bryan Rice at the music festival in Klakksvík. On the other hand, she was canceled because of the defensive weather, but the wind speed was no less than 49 meters per second. Portal says Wilde has not been able to sing at the festival, but she had a good time in the Faroe Islands on the knee pale and took the song to a pub.
Who is this Kim Wilde? may many readers ask themselves. Wilde was at the height of his fame in the 1980s and managed to bring some popcorn to the top of the world.
Wilde is entitled Kim Smith and will be 57 years old on November 18th. She is a professional horticulturalist as well as being a pop star.
Wilde's most famous song is undoubtedly the hit You Keep Me Hangin' On from 1986. See the video of that song and more on Youtube.com. 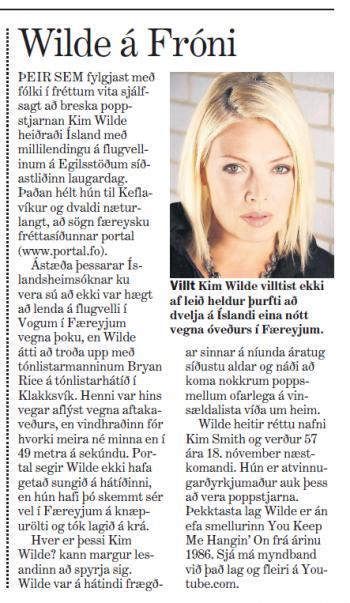