Who likes pop, must love Kim Wilde! Like almost no other artist the British woman has given the musical eighties a face. Belonging to the style icons of the New Wave decade with hits like "Kids in America" and "You came", she disappeared into the unknown in the decade thereafter. Thanks to Nena and a well organised eighties revival wave the Brigitte Bardot of pop is celebrating a glittering comeback now.

Of course the eighties were already a rare decade: Thatcherism, Rubik-cubes, Flashdance, Ghostbusters, Rambo, Austrian pop, Italo-disco, New Romantics, Balloon skirts, Duerwelle, Vokuhila, hairdryers, gel - all relics of an age about which everyone chuckles ashamedly now. But everyone who grew up during this time, get a strange glint in the eyes when the first tones of "Kids in America" are heard on one of the many "New Wave - Best of 80's" compilations. The listeners stamp their feet, prepare their fists, laugh nostalgically and can hardly wait until Kimberley Smith sings the part "We're the Kids in America, We're the Kids in America, Everybody live for the music-go-round". The fists are thrown into the air, loud growling swells up and for 3:30 minutes the auditorium is back in the year 1981, when ms Smith started a big career under the name Kim Wilde.
Kimberley Smith, born in 1960, is one of the icons of pop music and together with Sheena Easton also one of the most successful female popsingers of all time. blonde like Debbie Harry (Blondie), but with her pout sooner a young woman than an adult punker. Almost innocently she smiles from the front pages of many music and teenager periodicals. Under the musical direction of father Marty and brother Ricky Wilde (the stagename Wilde is used inflationary in the Smith family) she simply grew up under protection. You will search for big scandals without results.
At the beginning of her career she is the little sister who helps out the band of her brother as a singer. But after her first hits "Kids in America", "Chequered love" and "Cambodia" she mutates into the British teenage idol in all of Europe. Her musical bestseller "Kids in America" is still guarantees euphoria during lots of over 30/over 40 parties. During her career Wilde sells over 30 million records. Countless gold and platinum records are meant for her, and with "You keep me hangin' on" (a Supremes cover version) she even reaches number one in the USA. But in the middle of the nineties she says goodbye to her record company, because she can't find a good new sound for herself. After a stage role in the musical "Tommy" and her marriage with Hal Fowler, Kim Fowler (!) retreats from the music business, to devote herself to another passion: gardening. She is very successful with this, presents some lucrative television programmes and even writes several gardening advice columns. In the mean time she's become the mother of two children, studied landscape gardening and is more excited about winning the Royal Chelsea Flower Show gold medal for her 'Cumbrian Fellside Garden' than the golden records she possesses - like she says herself.
But the British singer was never so far away from sight. Until today her songs are being played on the radoi, even if her last album "Now and Forever" was released twelve years ago. For a revival tour in 2002 the British woman is even persuaded back on stage. A year later the big surprise: after Kim and Nena get to know one another during this tour, they release the single "Anyplace, Anywhere, Anytime" together - an English-language remake of Nena's hit "Irgendwie, irgendwo, irgendwann" - with which the ladies end up on no. 3 in the German singles charts. Uwe Fahrenkrog-Petersen takes care of production. With him Kim also records her newest and tenth album "Never say never".
In 2006 the 46 year old singer swaps the hedge trimmer for the microphone and celebrates a glittering comeback: next to eight completely newly written titles there are six new recordings of her biggest hits on the disc. Nena is also heard on Wilde's ninth album: in the new version of "You keep me hangin' on". Also ex-Ash-guitarist Charlotte Hatherley lends her voice, to "Kids in America".
"Never say never", the album title, does not refer to Sean Connery and his comeback as James Bond, but simply describes the realization of a pop icon: "I chose the name because I never suspected that I would ever release a comeback album. This album is as much a surprise as it is for anyone else."
Successful surprise?
No question, her 1980's classics have arrived well in the 21st century. Kim's voice sounds more mature and rounded. And her looks solve any mystery: she looks like she's 27 at 47. Whether this is because of her second passion (gardening) or her love for music, cannot be explained from here. Kim Wilde is full of passion and joy for good popsongs - and she's ready to prove it during her tour in Germany. 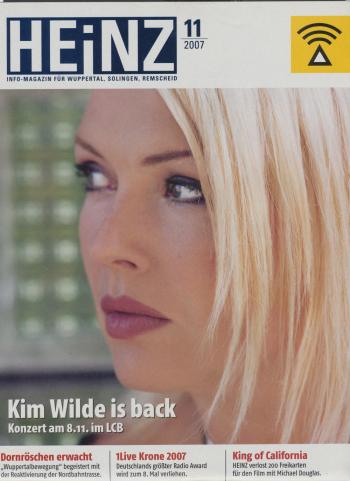 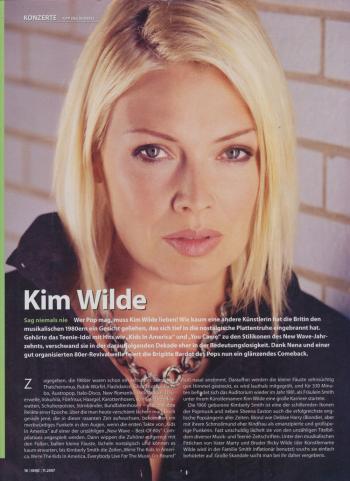 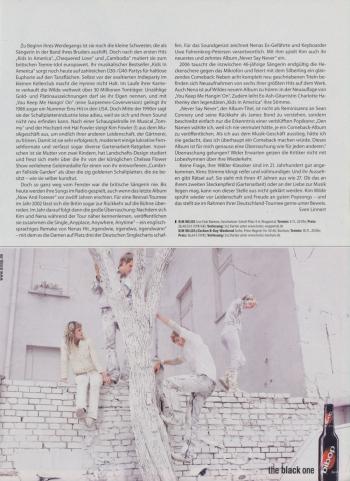