In the eighties she appeared in leather pants before the camera, now she appears between the geraniums. Yes, Kim Wilde is a gardening diva these days. We had an exclusive interview at her home and did a little plant quiz as well.

To be honest, whoever enters Kim Wilde's house is a little taken aback at first. It is a bit of a mess. There are books stacked up everywhere, the dishes haven't been done in a few days and the furniture seems to have come from second hand shops. Not the house of a worldwide star at all. But when you take a closer look, you see the interior has been designed with a lot of care. With her knees up on the couch the pop legend explains.
"I am not a control freak at all. Live and let live, is my motto. And you can see that in my house and garden. I have thought a lot about the basis, making the best use of the light and space, but after that it has to develop an atmosphere and shape on its own. With the house that went pretty fast, because we live in it. But this is the first year that I really like my garden the way it is. It has taken almost ten years to come to this point.

You went from rock & roll to the world of gardening. There doesn't seem to be a bigger contrast. Or are plants and flowers the new rock & roll?
Hmmm, plants that have a big impact might be. But they also have a tendency to overpower other flowers and can be deadly in that sense. The Ricinus Communis is, I think, the most rock & roll. Beautiful to see, but very poisonous as well.

Has rock & roll had that effect on you?
In part, yes. I didn't feel challenged by the trade anymore. I did the same thing over and over again from my 20th to my 36th birthday. And even though it was exciting at first, everything became predictable and that made me lazy. And that laziness made me too dependant on others to take care of my business. I was fed up with that and I wanted to regain control over my life. Back to basics; back to who I really am. There are still people who think it is 'incredibly brave' to have given up my successful singing career in order to have a life in relative anonymity. But I didn't see any other way. And it wasn't exactly brave, since my husband (actor Hal Fowler) stood beside me and held my hand.

You became a mother. Did your children inspire to get into gardening?
Absolutely. I can remember how great it was as a child to go and explore the garden. I wanted to give them that chance as well. But I didn't want to push it on them. My daughter Rose likes to pick flowers in the garden for me. Very sweet, but she gets them out with roots and all. Then I feel a bit discouraged: there go my carefully planted flowers! But they are children and for them the garden is just one big playground. I try to playfully make them aware of the care for nature. We don't have three separate garbage cans for nothing: one for greens, fruits and gardening waste, one for metal and one for plastic. The children like throwing their garbage into separate cans. Thanks to them I have become more involved in the environment. I want to create a clean and safe world for them. But the funny thing is that I became a bit addicted to the environmentally friendly life. I started using environment friendly weed killers and by recycling waste, but I have even bought a hybrid car recently. I'm not afraid that the hype around the environment will pass, because when you start living environmentally friendly it is damned hard to quit.

Jamie Oliver has started a campaign to let children eat more healthily. Do you want to convince people to be more aware of the environment?
Oh no, I'm not on a mission to change the world. But I am aware that I can convey a message because I am Kim Wilde. But I don't want to be a role model, it would make me feel uncomfortable. I guess I have been in the past. I didn't really realize it, though. I was mostly engrossed in 'important' things like what to wear. Now I can see what kind of influence I had. And still have. There are still people coming up to me - mostly fortysomething men - saying that they loved me. Really, if I got a nickel for every time people have said that to me... It is great that I could hide behind the plants over the past couple of years, because in the years previous I was always in the spotlights. I chose that myself, so I'm not complaining, but it wasn't so great to be watched as I was doing anything at all.

What do you think of modern day popstars like Britney Spears and Shakira, who regularly forget to put on their underpants?
It gives off a very sexually aggressive tone. I used to be seen as a sex symbol myself - something which made me feel very uncomfortable. But I have never used or exploited my sexuality. I worry about the influence on my children, especially my daughter. She is too young to watch the music clips, but she will become thirteen one day. And then? I know enough parents who are desperate because their teenage daughter wants to wear clothes that are way too mature for their age. And even though we live on the countryside and the television is rarely on in our house; that sexually tinted imagery is inescapable.

The sun appears over the English countryside. Kim proposed to go out into the garden, to show her 'green paradise'. The garden is so big that you could easily get lost in it.

In your book 'Tuinieren!' ('The first-time gardener') you give practical tips to design a garden. Whether it's sunny, dark or small. In the Netherlands most people have a garden the size of a stamp. What is your advice?
What works really well, is to create a round shape with stones or tiles. That is the seating area. Around that you put plants in different heights. Place a pot on a pillar or plant a little tree. That way you optically disguise the edges of the garden. Another way to make your garden look bigger is a pathway into the garden, designed so you can't see the end of it. Then you grow higher flowers and plants. You can still get lost in your own garden. I would be modest with colours in a small garden: use white and violet instead of red. I see a garden like another chamber in a house. When it's a small chamber, you paint the walls in a lighter colour to make it look bigger as well.

Dirt under your nails, dying plants, weeds. Why is gardening fun?
Everything changes all the time: the colours, the smells, the shapes. Every season there is a lot to see and life has its course. Of course you need patience. And mot people prefer to have a garden look great with the first sun in spring. That's impossible, because a garden takes time. But the reward is incredibly great for the minimal work I put into it.

To check whether Kim really knows something about flowers and plants, she was given five specimens that were smuggled into the country in my handbag. would Kim know which is which? And do you know?

1. Let me see... Is this an Osteospermum? I don't like them, but the blue heart of the flower is pretty.
2. Hmmmm, this must be a Diascia. What a beautiful little flower it is.
3. Is this an olive tree? Let me smell the leaf... Yes, I'm sure.
4. A Streptocarpus I think, but I am in doubt...
5. I don't recognise this one. The leaf is so different. Wait, I'll get my book. (She returns with a plant encyclopedia the size of a bible). It is a climber, but I don't know which. 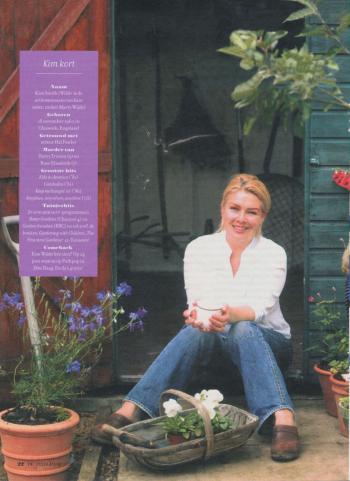 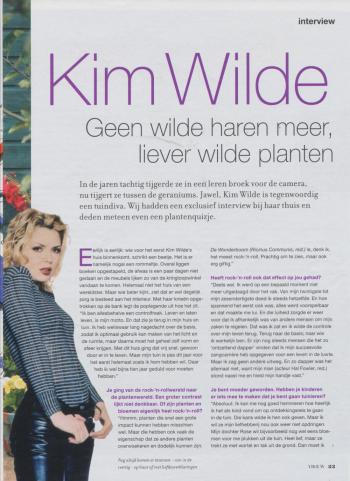 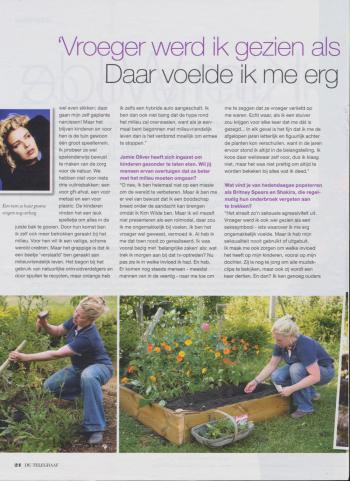 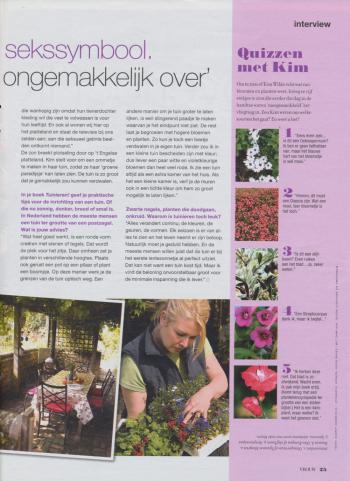 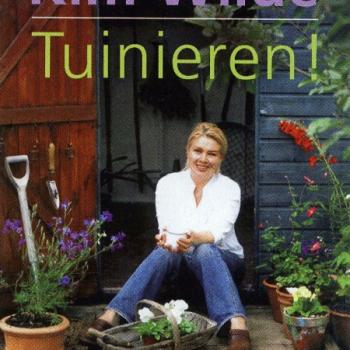 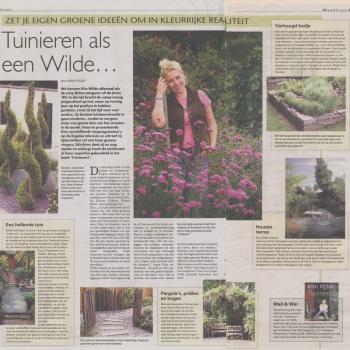 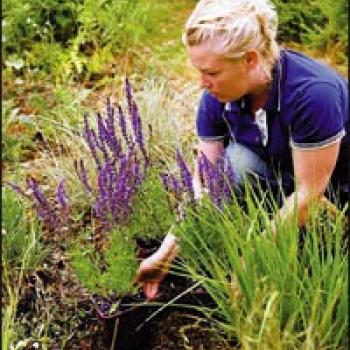 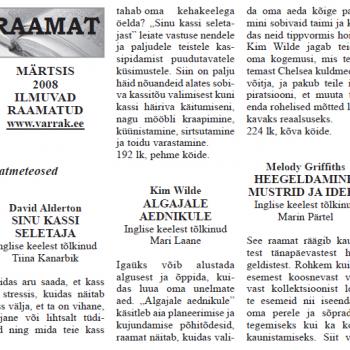 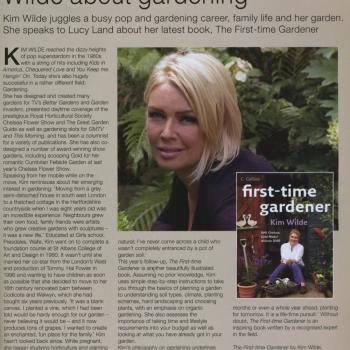