Kim Wilde: so beautiful were the eighties

For Kim Wilde the eighties have never ended. For one hour and a half the singer gave the audience in Den Atelier one more time a chance to taste how things were in that decade.

Kim Wilde doesn't look like your typical 46 year old English woman. A charming man would estimate about ten years younger. She has squeezed her beautiful behind in tight black leather pants and over her breasts and her small belly is a shirt with a skull. The peroxide blonde mane have been treated by a hairdresser who knows how women wore their hair in the eighties.

What would be painfully anachronistic for 99 percent of 46 year olds, looks great on Kim Wilde. She doesn't seem to have changed in the past 25 years. Her looks have of course, just a little, but her mentality is still the same. Her youthful carelessness, her temperament and her lust for life are infectuous.

When she opens the concert at 21.00 with 'Chequered love' (1981) in the sold out Atelier, I don't feel 26 years younger - because then I would be 4 years old - but rather like a 30 year old in the eighties. So that is what it was like! That is the decade that started with the ZDF hitparade and ended with Guns 'n' Roses. Back into the present get unfortunately most new pieces of their current CD "Never say more never", which appeared in the past autumn, eleven years after her previous album. The ballads fail feeling and the rock pieces miss strength.

After scarcely 20 minutes or, more exactly, with the first strokes of "Never trust A more stranger" (1988) the weaker pieces do not really put any more weight in the scales. With "Cambodia" (1981) the wild Kim dives again into the time of the Rubiks cubes, C64 and tennis socks (in slippern). With the last line "She won't lake his face again" I would have pressed a tear, if I weren't in company.

Also the singer is accompanied. Of half her family. Her brother Ricky, who wrote most of her pieces, plays guitar and her sister Roxanne sings in the background. Her niece Scarlett, thus the daughter of her brother, pursues the concert beside the stage and doesn't just get a song dedicated to her by her "Auntie" because of recently reaching majority, but by the public also a birthday sung.

Kim Wilde's voice becomes still better with each piece. The energy bundle penetrates at heights, with which most colleagues become dizzy. With "You keep ME hanging on" (1986), Depeche mode "Enjoy the silence" and her comeback Coversong "Anyplace, anywhere, anytime" (2003) she rings a furious final after nearly one and a half hours.

As the first encore Kim Wilde sings "You came" (1988), her last hit of the eighties, as the last one her very first hit: "Kids in America" (1981). Despite numerous volume revivals from Blondie to Alphaville the decade was never as close as now. When leaving the Atelier one still sings another little "Lala la lalala" for oneself and one is surprised that outside the cars look so modern. 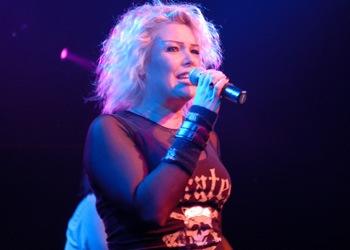 Kim laughs about her own incompetence