Singing legend Marty Wilde this year celebrates half a century in showbiz - and daughter Kim reflects on her own 25th pop stardom anniversary.

When bus driver's son Reg Smith was a baby, his grandmother made a remarkable prophecy. "She was a clairvoyant", he explains, "and she put her hand on my head and said 'This boy will be a famous singer and he'll travel the world'."
Reg's family, from the back streets of south London, were poor and only his Uncle Russell had any obvious musical talent, so there seemed little chance of the prophecy coming true. Yet, in 1957, 17-year-old Reg was singing at a Soho club when he was spotted by manager Larry Parnes, re-named Marty Wilde, and within a year became one of the UK's first ever rock'n'roll stars with debut hit Endless Sleep.

This year Marty (67) is marking his 50th anniversary in showbusiness with a major UK tour and an album, Born To Rock 'n' Roll: Marty Wilde's Greatest Hits, featuring a first-ever duet with daughter Kim (46) - who last year celebrated 25 years as a pop star.

"It wasn't until I was 17 and signed up with Larry Parnes that I was told the whole story about my grandmother's prediction", says Marty. "It was a funny feeling."
Marty's tall, dark, handsome looks and hits such as Donna, A Teenager in Love and Sea of Love made him an early heartthrob. But, after marrying former Vernon's Girl Joyce in December 1959, his popularity suffered.
"If I hadn't got married, I believe a lot of my records like Jezebel and Tomorrow's Clown would have done much better," says Marty. "I was encouraged to keep Joyce on as a mistress but I refused to do that. Other people have had careers, I have a family, and that's always been important to me."

Kim, who in recent years trained as a horticulturalist, chuckles. "A sweet lady names Val who I met at horticultural college still says 'I had a picture of your daddy on my wall - he broke my heart the day he married!'".
Although he's never stopped performing, Marty turned more to writing songs, using the name Freya Manston. He wrote the Casuals' smash Jesamine, I'm a Tiger for Lulu, and Status Quo's Ice in the Sun. Inevitably, Kim was brought up with Marty's music all around her. "I always wanted to be a pop star", she says. "I remember being on my roller-skates behind the garage of our house, dreaming and dreaming."

UK Top 5 records such as Kids in America, You Keep Me Hanging On, and You Came were among countless international hits which made Kim one of the biggest stars of the Eighties and beyond. And Marty was always there to keep her feet on the ground. Kim recalls supporting Michael Jackson on his 1988 world tour. "Dad and I were watching Michael on stage. We'd been witness to his circus of people and there were dramas everywhere - things associated with being a megastar. I said to Dad 'Do you think that'll ever be me?'. Hesitatingly, he went 'Yeah, if you want it...' We both knew in our hearts it wasn't for me."
"Anybody with any brain should be frightened by that sort of thing," adds Marty. "When people get that big they can't go out like the rest of us can; they get separated from the human race, and in the end they end up lonely people."
"We've got the best of all worlds. We have a certain amount of fame and success, yet we can be ourselves and do most things quite peacefully. We can switch to entertainment mode in front of an audience, and then it's back to normality."
Like her dad, Kim's UK charttopping days dried up when she got married - in 1996, to actor Hal Fowler - and started a family.
"When I got out of the music industry, I didn't really treasure it much", she confides. "And it's been lovely to be at home, do the school run and just be one of the mums and have a normal life."
However, her music career turned out to be far from over, with UK tours and occasional hits elsewhere in Europe.
It remains to be seen whether Marty's current tour will be his last. "Driving around Britain these days is so tough that, by the time you get to the theatre, you're a bag of nerves", he says. "But I'll never stop writing - and I guarantee one of my grandchildren will also be a writer, if not of songs then of books, and another will be a singer. There is a natural gene thing which is passed on." 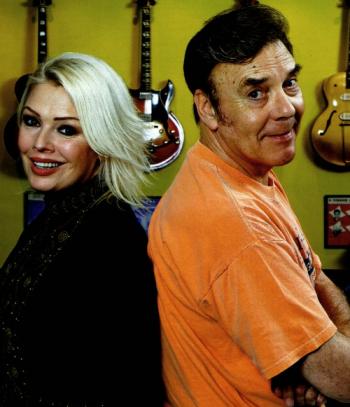