Kim Wilde did a concert last night in Copenhagen. 24timer caught the blonde 80's princess, before she went on stage.

25 years ago one could hear the 20-year old Kim Wilde's colourful voice in the giant hit "Kids in America" in 1981 for the first time. The song has almost become the now 46-year old popsingers audiosignature, and the hit is still in good rotation on all the world's radiostations. Up through the 80's, more successes followed, until in 1995, after 9 studioalbums, she withdrew, had children, became a professional gardener, and parked the popcareer for an unknown period of time. Last year the english ex-teenstar then popped up again in the european charts with her new album 'Never Say Never', and hereby the singer cemented that she had come over the midlife crisis as a popartist. Right now Kim Wilde is on tour with the old classics and the new hits, that is when she's not busy winning gold medals with her gardening art.

Boring to be a star

Which of your songs do you yourself think is the best?
Even though there was a long period where I was about to throw up over "Kids in America", it is probably the one I think is the best. The audiences still go crazy over it, and I meanwhile feel I got a good relationship with it again. It's probably going to be played at my funeral, but that would be OK so people can get in a better mood.

What's it like to be back on the stage again?
It's nice to get to know the audience again. Many fans have a big place in their heart for me, and that's really fantastic. At the same time my ego has got a big notch upward, probably more than what is concidered to be healthy, ha ha.

What has been the wildest experience during your career?
That was the tour with Michael Jackson in 1988. That was completely insane and something one could learn from. It was there I found out that I didn't want to be in the music business forever. Michael Jackson was lonely, isolated and always had his security people around him. I knew that I had to get out of the industry before it destroyed me and allready at that time I was starting to get bored as a popstar and would like to do something else.

How did you suddenly become interested in the gardening profession?
I wanted a garden for my children, so I went to some courses in a garden centre, and I was like hit by the lightning. It was almost a religious experience, and from that point on, I just knew that I should be a gardener. It was a big thing for me. Kim Wilde hasn't yet got any plans for more albums.

What you didn't know about Kim Wilde 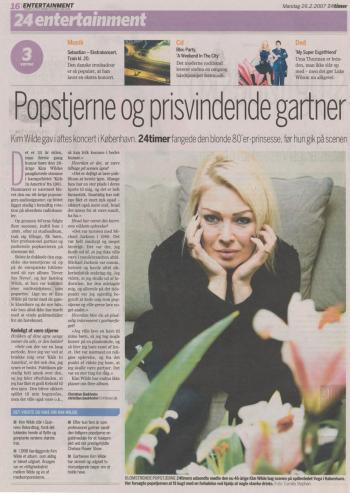