She is the pop icon of the eighties. With hits like 'Kids in America', 'Cambodia', 'You came' or 'Four letter word' she rose to the top of the charts. In 2003 Kim Wilde came back: in duet with Nena she managed a successful comeback with 'Anyplace, anywhere, anytime'. At the Sportgala 2007 the now 46 year old will perform her famous hits as well as new track from her album 'Never say never'. How her children think about their mother's comeback, what fascinates her about horticulture and what her plans are for the future - about all this the English woman talked with us in an interview.

'Never say never' is the name of your current album. Is the choice of this title inspired by your comeback in music?
Yes it is, I never thought I would record another pop album, after I said goodbye to the music business ten years ago.

After countless hits in the charts you decided to study horticulture. What fascinates you about this?
I felt that a career in pop business and raising children couldn't be combined, and I also felt that there was nothing left to achieve in music. I was bored and needed new inspiration. Originally I wanted to create a garden in which my children could play: a magical place to have fun in. After studying horticulture for a while, it simply grabbed me!

You played in the musical 'Tommy' for a while. Was it always a wish of yours to play in a musical? How much does a job as a musical performer differ from a life as a singer?
Tommy was a platform from which to jump out of the music business. I met my husband Hal there. I enjoyed acting and singing. I loved the album Tommy from the Who as a child - this is why I loved doing this from the heart and also it has changed my life. I am eternally grateful to Pete Townsend for this.

At the musical you met your husband, with whom you have a son and a daughter. How do your children react to you being a popstar once again?
We don't really make a big deal of that. Mum simply goes to work every now and again. My children love music: Harry plays the guitar and Rose plays keyboards. They do have music in the blood.

In the eighties you played as support act for Michael Jackson and David Bowie. With whom would you prefer to go on tour once again?
I have done some eighties tours with bands like ABC, Human League and Heaven 17. They were really great. Shortly I will be on tour with Blondie, which really excites me. I like Snow Patrol, Rufus Wainwright and Lily Allen too.

In 2003 you did the English/German version of 'Anyplace, anywhere, anytime' with Nena. How did you get to know one another? How did this contact come to pass?
We met firstly in the eighties, and then again in Berlin during a promo party for a song I recorded for DTM (German Touringcar Racing). She asked me if I wanted to sing on her song 'Anyplace, anywhere, anytime'.

Do you know Hyper Child, Jazzkantine or Such a Surge? They are bands from Braunschweig.
No, but I do love rocking.

Musical actress, mother, landscape garden designer, popstar - you are successful with everything you do. How does the future look for Kim Wilde?
At the moment I am concentrated on my performance and the new album, but I think that the future my hold some great ventures for me yet. 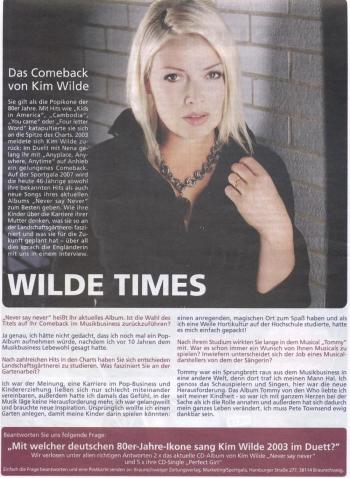