A record-breaking tree may have to be uprooted. The 57ft London Plane in Winwick Park was toppled during the devastating winds on Thursday, January 18. Warrington Borough Council is considering whether it can be re-erected. The tree is around 60-years-old and known as Plane Ace. It was planted by singer Kim Wilde when Winwick Hospital was demolished in 2001. It is in the Guinness Book of Records as the tallest tree transported and replanted - from Belgium to Warrington at a cost of Â£60,000. David Stamp, the council's head of parks and green spaces, says the council is seeking advice to find out if the tree can be saved. Les Higgins, Winwick Parish Council clerk, hopes that if the tree is removed, the site can be used to display a part of Winwick's history. He said: "On top of the old hospital used to be a weather vane and Countryside Properties offered Â£10,000 to re-site it as a public arts feature. The parish council is keen to have the weather vane erected." A structure would have to be built to mount the vane and this would probably cost in excess of Â£20,000. Mike Bailey, the council's leader of environmental services, said: "The vane is in storage with a sub-contractor that worked on the Winwick Park development for Countryside Properties. It is still a case of raising the difference - if the money can be raised and an agreement reached on where it could be put and who would look after it, then we could go ahead." 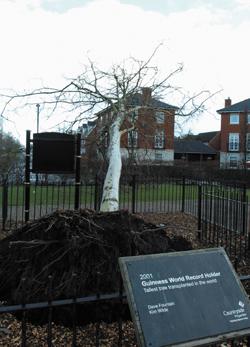