A new state-of-the-art breast unit, which will be used by patients in Comet country, has been officially opened. Former pop star turned TV gardener Kim Wilde, who has co-designed a quiet garden for patients to enjoy, cut the ribbon to open the new Vicki Adkins Breast Unit at the QEII in Welwyn Garden City.

The new unit will now serve patients across east and north Hertfordshire. It will provide a dedicated diagnostic and outpatient service with some of the latest equipment for detecting breast disease. Vicki Adkins, who has single-handedly badgered and coerced the community into donating more than £1m, said: "At last my dream has come true. The breast-care team the East and North Hertfordshire NHS Trust has in the new unit will provide a service that will be the envy of many people in the country."

Kim, one of the appeal's patrons, said Vicki came to her 10 years ago as a cancer sufferer. Kim said: "It is great to see what's possible when someone has a dream. I do all the safe stuff like cutting ribbons and line dancing. I leave the adventurous stuff to Vicki, but it's great to be here for this special moment."

In front of dignitaries and hospital staff Kim became so emotional she could hardly read her own speech. She concluded that Vicki was someone with "drive, energy and powers of persuasion" and "should not be underestimated".

The new unit also incorporates an MRI unit, which shared the official opening, and houses a brand new MRI scanner, changing facilities and a large prep/recovery area for ward patients.

The Trust's chief executive Nick Carver said: "At a time when the longer-term future of local hospitals is being debated, it is important to remember the commitment and support that continues to be made for patients and their families by our staff on a daily basis. 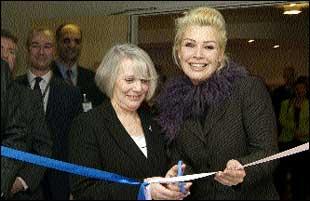