The MusicStars were allowed to share the stage with Kim Wilde today and to sing and rock along with her medley of 'You came' and 'Kids in America'. The British singer visibly enjoyed the energy of the seven finalists. After the show she joins the talents and asks them lots of questions.

They sit around the international superstar. Kim lets herself inform about the original amount of competitors and is impressed that the finalists have gotten this far. When she hears about the rules and the so-called 'friendship ticket', she is shocked: 'That's horrible, then you have to throw out your friends!'. She asks the finalists about their idols and she advises them not to get too intimidated about other people's talents and find their own voice. Also she says that they need to form a network of useful contacts in the music business, to write their own songs and to work with other songwriters. At the end of the meet and greet she signs a cd for everyone and wishes them luck with the show. Then we have our own moment with the sympathetic pop lady.

How did you become a popstar? Would you have participated in a casting show, if one had existed in the early eighties?
I was very ambitious at the time. It was always my wish to become a singer. My breakthrough happened because of a portion of luck. When I hear what happens hear in the Musicstar show, with the finals and the friendship tickets, I am not so sure if I would have been strong enough for that mentally, to get on stage and get criticism, added to which the risk of not making it through every week. Of course I was very ambitious, and that would have made me do it and give my best.

What does one need to become a popstar?
A lot of variables play a part in that. If anyone knew the answer, they could write a recipe and make millions with it. I only know the most valuable ingredients. One needs a lot of ambition, and one has to love what one is doing. That's on top of the list of the recipe. They are the main ingredients for success.

How did you like being on stage with the MusicStars?
It is great to be on stage with young people. I liked them jumping around in 'Kids in America'. It is something special for them and me. They have a feeling for pop and it is great to share that with them. I love being the 'old lady of pop'. They made me sign cd's for their parents, one even for a grandparent! (laughs)

What is the most important advice given to you?
They have to have stamina, because it will be a bumpy ride, in MusicStar and after that. They really, really have to love what they do. That is the most important thing. They have to be prepared to work very hard. Loads of people think that part of the success is handed on a plate, and think they can rest after their breakthrough. I have always worked very hard for my success. It is very hard to be successful for a long time. I had a lot of luck at the beginning, everything went very fast. I can also say that I was given a great chance in my life. But now we are here, 25 years later, and I'm still making music. That takes more than a few chances. You make your own opportunities.

Would you advise your children to take part in a casting show, if they were to do a musical career?
If they would choose to do so, I would not advise against it. It is a good chance to get into the business. But they also will have to be tough. I believe my seven year old daughter Rose has the right intention to do this. She's already very confident and can deal with disappointments. It wouldn't be as good for my nine year old son Harry. He likes Metallica, is learning to play the e-guitar right now, and I guess he will end up in a band. If that will be a career, I don't know. But both are very musically oriented. Music will be part of their lives. 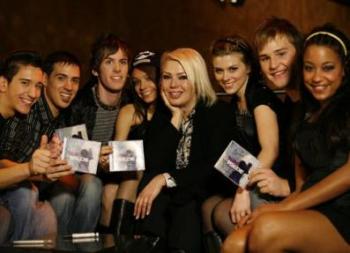